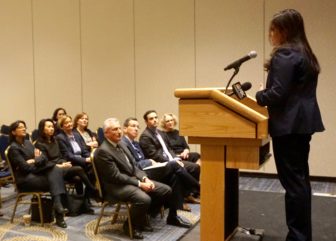 Krishna Patel of the anti-trafficking group, grace farms, speaking to Gov. Dannel P. Malloy and others.

The warning signs can be a well-dressed man of a certain age checking into a hotel with an ill-dressed minor girl. The girl might be unwilling or unable to make eye contact. Or she doesn’t have her own money, ID or cell phone. She might show evidence of abuse, physical or psychological.

They are the signs of sex trafficking of minors, a problem increasingly confronted with a new vigor by authorities and corporate America. Hotel staffs are being trained to spot them as they check in guests, provide food and beverage services or simply interact in the hallways and public spaces. In Connecticut, it’s now the law.

“It’s not an easy subject to talk about,” Gov. Dannel P. Malloy told a small audience Thursday at the Marriott in downtown Hartford. “Human trafficking is a form of modern-day slavery. It’s not just happening abroad, but it’s happening right here in Connecticut, in Massachusetts, in New York, in every state. It’s a problem that shocks our consciences. I think it’s one that we prefer to to push away and not think about it.”

Marriott International, one of the world’s largest hotel chains, began this month to require all employees at its 6,000 properties to undergo training to recognize the signs of sex trafficking, adding momentum to a movement that’s prompted law enforcement and others to see young prostitutes as victims, not criminals.

Until 2010, minor children who could not legally consent to sex still faced criminal prosecution for prostitution in Connecticut. Until 2014, underage prostitutes were not considered “uncared for” under state law, limiting the authority of the Department of Children and Families to provide aid.

“How insane was that?” asked Joette Katz, who resigned as a justice of the state Supreme Court to become Malloy’s only DCF commissioner.

Referrals to DCF on prostitution-related issues jumped from 44 in 2012 to 193 last year, a change Malloy says he does not attribute only to the change in the law.

Malloy, Katz and Commissioner Dora B. Schriro of the Department of Emergency Services and Public Protection joined officials from the hospitality industry, non-profits and Quinnipiac University School of Law to publicize a public-private partnership to adapt and broaden the reach of Marriott’s training program to meet the requirements of the new state law.

The Connecticut law, a mandate initially opposed and then embraced by the industry after revisions, set standards for record-keeping and staff training and imposed penalties as great as property forfeiture on properties that tolerate sex trafficking.

“Sometimes, you have to hurt people where they live,” Katz said.

With the support of the TSA, Schriro said, state police detectives, FBI agents, prosecutors and others will offer training to workers in the transportation industry.

Tu Rinsche, the director of corporate social responsibility for Marriott International, said the new global corporate training requirement is an evolution of a human rights policy the chain has had for more than a decade.

“How we do business is as important as the business we do,” she said.