Unlike other Trump picks, McMahon sails through confirmation hearing

Linda McMahon after her confirmation hearing

Washington – Introduced by the two senators who crushed her political hopes in Connecticut, Linda McMahon on Tuesday sailed through a confirmation hearing, placing her a step closer to becoming the next head of the Small Business Administration.

Sens. Richard Blumenthal and Chris Murphy, who both ran against McMahon to win their seats in the Senate, praised McMahon, the founder with her husband Vincent of the World Wrestling Federation, now the WWE, as a savvy businesswoman who would bring good policy and judgment to the Trump administration.

At her hearing before the Senate Small Business and Entrepreneurship Committee, Murphy introduced McMahon as “a fellow Nutmegger.”

“This visual is going to be a little amusing and surprising to folks in Connecticut, who saw the three of us duke it out during two long Senate campaigns, but politics can’t work if political grudges never die,” Murphy said.

Blumenthal said McMahon, who spent $50 million on each of her self-funded Senate races, is known as “a very generous contributor to many charitable, philanthropic and educational causes” in Connecticut, including Sacred Heart University, where the nominee sits on the board.

“I think she will be an excellent fit for this agency,” Blumenthal said.

A member of the Trump cabinet “billionaire’s club,” McMahon contributed about $6 million to a political action committee supporting Trump.

The Small Business Administration backs loans to qualified businesses that have had trouble getting credit at commercial banks. It has priority programs for women, minorities and the disabled.

The cordial treatment of McMahon by both Republicans and Democrats on the panel was in stark contrast with the tough grilling of most of the other nominees President Donald Trump has picked to fill out his Cabinet.

Some Democrats, including Sen. Heidi Heitcamp, D-N.D., actually gushed. Heitcamp said she had looked at McMahon’s daughter, when the nominee spoke of some of the challenges she had faced in establishing the WWE. “I wish you could have turned around and seen the pride and affection on your daughter’s face,” Heitcamp said. “My mother’s heart was warmed by that affection.” 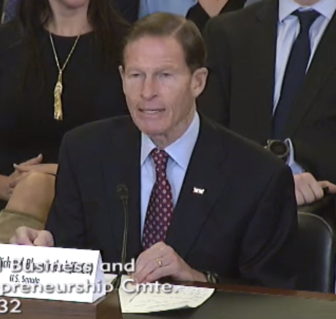 Many Democrats invited McMahon to visit their states as SBA administrator, an indication that they believed her confirmation by the full Senate was a fait accompli.

“We have a great beach community who I hope you’ll come visit,”said Sen. Ben Cardin, D-Del.

One of the toughest questions came from Sen. Jeanne Shaheen of New Hampshire, the highest-ranking Democrat on the panel, who asked McMahon if she backed a GOP plan to fold the SBA into the Commerce Department.

McMahon said during her last campaign for Senate she was a “strong advocate for reducing duplicative programs.” But she said she was only “focused on the concept” of reducing federal programs and agencies, and never said the SBA should not be an independent agency.

“I am a firm believer that the SBA should remain a stand-alone agency,” McMahon said. 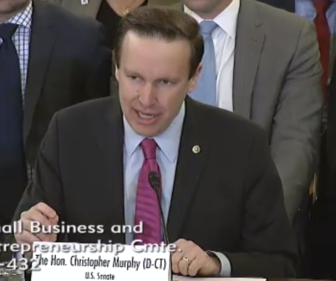 McMahon repeatedly responded to questions by recounting anecdotes about what she learned about the needs of small businesses during her Senate campaigns.

“I learned there wasn’t so much a shortage of jobs, as people who were trained for those jobs,’ she said.

She also told the panel that she and her husband Vincent struggled in the early days of building their wrestling empire, so much so that the $12-a-month rental of a typewriter posed a financial hardship.

“I remember the early days when every month I had to decide whether I should continue to lease that typewriter or buy it,” she said.

She also told the panel that she and her husband once declared bankruptcy and lost their home.

Sen. Mazie Hirono, D-Hawaii, asked if she would support and protect special SBA programs for women. “I definitely want to be a strong advocate for women…” McMahon replied.

Sen. Cory Booker, D-N. J., asked if McMahon would lift the cap off a certain small business loan program. McMahon said she will investigate whether the loans “are being made effectively,” and if they are, whe’d consider lifting the cap.

Mostly she assured the panel she is an enthusiastic candidate for the job.

“I’ve always been a defender of the little guy,” McMahon said. “We need someone who can go to bat for our small businesses, and I’m just the girl to do that.”

The Small Business Committee plans to vote on her confirmation next week.

“If Dick and I are supporting her, I think she’ll get Democratic votes,” Murphy said.

Blumenthal said the reason he’s supporting McMahon is that the Trump administration “needs someone who is sane and has experience in job creation.”