Some education aid increases might not be spent on schools 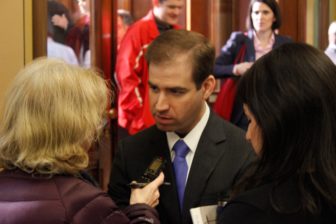 Hartford Mayor Luke Bronin at the Capitol for the budget address

In his new budget Gov. Dannel P. Malloy is proposing to increase state education grants to 52 cities and towns with struggling schools by about $230 million, but it will be up to the municipalities to determine whether to actually spend it on their schools – or use it to close their own local budget shortfalls or make up for other state budget cuts.

“That could be a problem. Obviously if a community is not required to spend it on education, then it’s not education aid,” said Patrice McCarthy, the deputy director of the Connecticut Association of Boards of Education. “It’s not going to go to support student needs in most communities …It’s important that people understand that education grants might not be being spent on education.”

There are 116 towns that will collectively lose $172.8 million in education-specific grants.

McCarthy suspects leaders in towns that do receive increases will use all or part of them to close local budget deficits or make up for the portion of teacher pension costs the governor proposes shifting to towns.

Factoring in the pension bills that would start coming to municipalities, nearly every town would lose state education money – a net decrease of $377.3 million in the fiscal year that begins July 1.

The 30 worst-performing school districts, however, are legally barred from cutting education spending below this year’s levels, so they would only be able to redirect any state aid increase in excess of their present budgets.

Asked what Hartford would do with the increased state aid, Mayor Luke Bronin said he plans to use it to help bail out his city’s finances.

“This isn’t about money that is going to let us do new investments. This is about staying afloat,” Bronin, a Democrat, said during an interview.

Hartford, which is facing the possibility of insolvency, is one of the biggest winners in the governor’s proposed budget. Hartford stands to gain $38.1 million in state aid next year, a 17 percent increase. Nearly $12.2 million of that would come from education grants, though it will be up to Bronin and his City Council to decide whether to send it to the struggling city schools. The city would have to pickup the cost of $17.1 million in teacher pensions that the state used to cover.

Last summer, Superior Court Judge Thomas Moukawsher sent shock waves across the nation when he ruled after a long trial that the way Connecticut distributes education aid is “irrational” and unconstitutional.

Malloy spent a significant portion of his budget address before the General Assembly Wednesday explaining why he agrees with the judge’s conclusion that the state is failing too many students in struggling school districts.

“I agree that we are not meeting our constitutional requirement of a fair and equitable public education system – one that guarantees every student the opportunity for success,” Malloy said.

The mistrust that state aid earmarked for education actually will be spent on education is based on the fact that the last time the state increased education aid, many towns used large portions of it to close budget shortfalls.

The state issued guidance then that required the “substantial majority” of the funds to be spent on education, through several educators testified during the school-funding trial that rule translated into their district’s receiving only 51 percent of the new aid.

The “substantial majority” rule would no longer be in place for the upcoming budget year.

There will be increased pressure on towns that receive increased education aid to raid that increase because many of them would lose state aid overall under the governor’s plan.

“We are very concerned how shifting money away from small towns to cities and how that is going to impact taxes,” said Betsy Gara, the executive director of the Council of Small Towns during an interview. “Our hands are tied.”

The Connecticut Coalition for Justice in Education Funding, the coalition that is suing the state for alleged underfunding of schools, was stunned by the governor’s proposal.

“These proposed new cuts in state educational support underscore the need for judicial action to ensure that state government meets and does not retreat from its state constitutional responsibilities,” said James J. Finley, principal consultant to CCJEF and an expert witness in the case.

“Yet again, it appears that state budget politics under the guise of reform will determine proposed changes to the ECS formula and the level of state support for education,” said Herbert C. Rosenthal, president of the Connecticut Coalition for Justice in Education Funding Rosenthal.

Correction: Numbers in this story have been updated to reflect corrected numbers issued by the governor’s budget office.