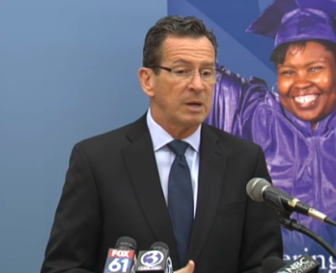 It’s a budget laden with cuts, but Gov. Dannel P. Malloy’s first event after Wednesday’s rollout of his fiscal plan for the next two years was to highlight what he says are significant improvements in services to individuals with intellectual disabilities.

Malloy was publicizing that his budget calls for the state to spend $3.8 million on an “ID Partnership Initiative” intended to address a waiting list for services from the Department of Developmental Services, a source of complaint as the state has tightened funding for services over successive fiscal years.

In addition to the $3.8 million, the administration is proposing to spend $1 million in bonding to convert group homes to various types of supportive housing that provide a higher level of service, Malloy said.

The state also will continue to privatize its network of group homes, he said.

The state will spend $1 million for pilot programs to explore best practices in serving families with persons with intellectual disabilities, including respite services. Another $1.8 million of the $3.8 million will be used to increase reimbursements to providers undergoing a conversion from being funded by state grants to Medicaid fee-for-service payments.

Malloy said his budget will provide funding to keep the Southbury Training School open, despite a shrinking population that has resulted in high costs per resident. But he said the state no longer will maintain a wholly dedicated fire department, which generated overtime costs of $600,000.

Closing or, more likely, repurposing Southbury is a matter of time, he said. But the final decision may come after his current term ends in January 2019.

“I don’t think we’re talking about closing it in the next two years, but I think the time is coming rapidly where Southbury as we know it will cease to exist.”

The Arc Connecticut, an advocacy group for the intellectually disabled, cautiously praised the governor’s budget proposal.

“On the one hand, we are gratified that the governor has proposed positive steps to begin to address the residential waiting list crisis and to begin to stabilize community supports,” the group said. “These proposals indicate that Gov. Malloy has heard our community on these issues and that he shares our belief that the current system can and must be improved. This represents significant progress for people with I/DD.”

But ARC Connecticut complained that day programs remain limited for persons with intellectual disabilities who graduate or age out of public-school programs.

“At the same time his proposal contains cuts to other vital DDS community supports. What is most concerning is that there is no money at all for new graduates with I/DD in either year of the two year budget. We still have work to do!”