Battles over labor’s wages heat up at Capitol 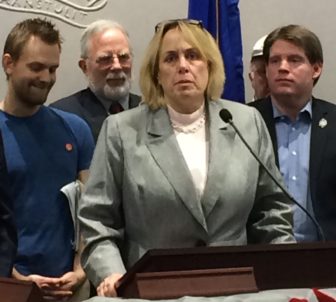 The clash over labor costs intensified Tuesday at the state Capitol.

While one legislative panel split down the middle over whether to raise Connecticut’s minimum wage, unions and their allies rallied to battle proposals that would allow communities to cut worker wages on public construction projects.

In little over an hour, the legislature’s Labor and Public Employees Committee defeated one bill that would have raised the minimum wage, and then adopted a second measure that ordered the same increases.

Both bills would increase the minimum wage, which currently is $10.10 per hour, to $11 next January. It would increase by another $1 per hour each January until it reached $15 in 2022.

From there, the minimum wage would be tied to the consumer price index and rise annually in proportion to the rate of inflation.

The back-and-forth nature of the committee’s actions is tied to its composition, and to strong partisan disagreement over the minimum wage.

The panel, which has four senators and 13 representatives, has the option of splitting its membership and voting separately on bills.

One measure, earmarked for the Senate, failed in a 2-2 vote, with Republican senators opposing it and Democrats voting in favor.

“In this economy it is prudent for this legislature to stop sending a shot across the bow to businesses in Connecticut, to stop creating an unfriendly business environment,” said Sen. Michael McLachlan, R-Danbury.

“Connecticut already has one of the highest minimum wages in the United States,” said Sen. Craig Miner, R-Litchfield. “The last increase in the minimum wage wasn’t thirty years ago, it was in January. Increasing the minimum wage yet again will send a clear message to businesses in Connecticut and elsewhere that the state has no intention of providing them with a predictable regulatory environment.”

Senate Democratic leaders were not happy that Republicans blocked the Senate bill  in committee.

Republicans picked up three Senate seats in the last election, so the body is now evenly split, and each legislative committee has an equal number of Republican and Democratic senators. During the last election, the state’s business most prominent business advocacy organization – the Connecticut Business and Industry Assocation – ran advertisements supporting Republicans in several of the contested districts.

“In their first act of power purchased for them by CBIA, senate Republicans kill state minimum wage bill,” read a press release from Senate Democrats shortly after the vote. 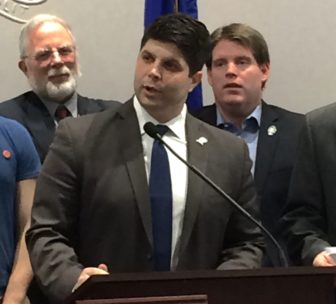 Sen. Cathy Osten, D-Sprague, said more than 70 percent of Connecticut’s minimum wage earners are adults supporting a household, which they cannot do at the current rate.

“They are not teenagers starting out with their first job,” she said. “They are working sometimes two and three and four jobs just to make ends meet.”

Democrats hold a slim 7-6 edge on the labor committee. So while the Senate bill failed in a 2-2 deadlock, representatives on the committee passed an identical bill in a 7-6 vote also along party lines. That measure now heads to the House of Representatives.

Rep. Edwin Vargas, D-Hartford, said Connecticut’s economy has added two few middle-income jobs in recent years. That means there has been some growth among the top earners, and too many people forced to take very low-paying jobs.

“We have more people working on the higher end making big bucks and more people on the lowest two or three rungs,” he said. “… You know what, what’s wrong with lifting all boats?”

And while the labor committee battled over the minimum wage, the Connecticut Building Trades Council, other unions and their allies rallied to block proposed changes to Connecticut’s prevailing wage statute.

Gov. Dannel P. Malloy, a Democrat, proposed new parameters in January of $500,000 for remodeling work and $1 million for new construction.

House and Senate Republicans also have introduced bills to raise the thresholds.

“I just don’t know what’s wrong with this building,” said Lori J. Pelletier, president of the Connecticut AFL-CIO, who was referring to both the prevailing wage proposals and to the opposition to the minimum wage hike. “That’s not the kind of state that we are.”

“We understand that raising thresholds are not good for workers,” said David Roche, president of the building trades council.

Some prominent Democrats in state and federal office also spoke out against raising the prevailing wage thresholds. While they did not identify the Democratic governor by name, they did say anyone supporting such a measure would pay a political price. 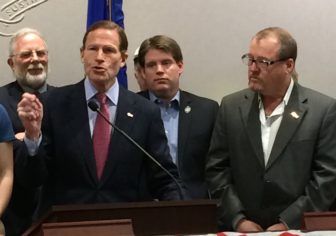 “I never thought we’d have to fight this fight in Connecticut,” U.S. Sen. Richard Blumenthal said. “We need to hold accountable the people who have forgotten the working men and women in Connecticut.”

Anyone that is supporting one of these (proposals) is not actually respecting Connecticut workers, and they’re doing the work of corporate elites under the guise of helping taxpayers,” said Middletown Mayor Dan Drew. “And it’s bogus. It’s not true. We should never stand for it.”

Drew, a Democrat who is exploring a 2018 gubernatorial bid, said the economic benefit of the prevailing wage statute is “massive” in his community. “Our workers … do better and have more earning power and can pay for things in the community, can go to local businesses, can buy homes and pay their taxes, when they make a decent living, an honorable, dignified wage.”

Malloy spokeswoman Meg Green said Tuesday that, “By easing mandates, our cities and towns will have greater flexibility to make their local governments leaner and more cost effective. It’s important to note that the prevailing wage threshold has not been raised in 26 years. It is far past time for an update that reflects the cost increases in construction and factors in inflation to help our small towns keep project costs down and ultimately pass on savings to taxpayers.”