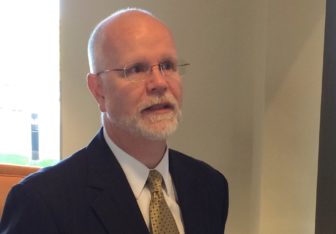 Lembo projected an $11.8 million surplus while acknowledging this hinges on an optimistic view that final income tax payments this April will outperform earlier filings.

Just two days earlier, on Monday, the legislature’s nonpartisan Office of Fiscal Analysis projected a $65.2 million deficit for the fiscal year that ends June 30. OFA downgraded expected income tax receipts in that forecast by $60 million from an estimate it developed in mid-January with Gov. Dannel P. Malloy’s budget office.

Still, while the comptroller’s office qualified its surplus projection, saying it was issued “with caution,” Lembo acknowledged the state budget’s fate may rest with the earnings Connecticut income taxpayers made during the strong stock market of late 2016.

Preliminary payments on those earnings, which were made late in 2016 and earlier this year, have fallen short of expectations. But because provisions in state law allow taxpayers to delay payment of most of their liability until their final filing on April 15, total income tax receipts are difficult to project before that date.

“This would help to explain why estimated payments remain negative despite a strong stock market run-up in the final months of the 2016 tax year, Lembo said. “As I noted last month, in addition to the uncertainty with respect to the final income tax payments in April, the growth in the payroll-driven withholding portion of the income tax has been slowing. Therefore, income tax receipts remain a significant risk factor to the small surplus projections.”

Malloy’s budget office is projecting a $22.9 million surplus for the current fiscal year.

All three competing budget projections are relatively close together in the context of a nearly $20 billion state budget and an $18 billion General Fund. Each of those projections represents a fraction of 1 percent of General Fund spending.