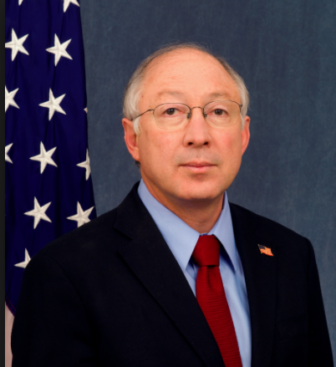 Department of the Interior

Lobbyists for MGM Resorts International made a well-timed play Tuesday in their fight to stop a new tribal casino in Connecticut, delivering a warning from former Interior Secretary Kenneth Salazar that the proposal would jeopardize the state’s revenue-sharing agreement with the Mashantucket Pequot and Mohegan tribal nations.

In a meeting with Gov. Dannel P. Malloy’s chief of staff and legal counsel, an MGM vice president and two lobbyists presented a legal opinion MGM solicited from Salazar, a former Democratic U.S. senator and Colorado attorney general who oversaw the Bureau of Indian Affairs as interior secretary for five years during the Obama administration.

The Pequots and Mohegans, who are seeking legislation allowing them to jointly develop a casino off I-91 in East Windsor to compete with the gambling resort MGM is building in Springfield, dismissed Salazar’s letter as the product of a paid consultant, the second former Obama administration official hired by MGM to lobby against the tribes’ expansion plans.

“First they paid former Attorney General Eric Holder. Then, they paid former Sen. Joseph Lieberman. Now, they’re paying the former interior secretary,” said Andrew Doba, a spokesman for the tribes. “What does it add up to? That MGM is willing to pay anyone and everyone to stop our project from moving forward because they know our proposal is going to keep jobs and revenue in Connecticut.”

MGM had no immediate response to a request for details on the compensation paid Salazar.

But Doba offered no rebuttal to the legal points raised in a two-page letter by Salazar, now employed by WilmerHale, a law firm that employs 1,000 lawyers in a dozen offices across the world, including one in Washington, D.C.

The letter frames issues that Malloy recently asked Attorney General George Jepsen to address in a formal legal opinion, and it suggests questions for legislators to ask during a public hearing Thursday before the Public Safety and Security Committee.

Whether Salazar’s opinion will be viewed as reliable is unclear, but he addresses issues Jepsen flagged in a memo that effectively killed the tribes’ effort to win authorization for a third casino during the 2015 session of the General Assembly.

A key question raised by Jepsen in April 2015, when the tribes first sought legislative approval for their first casino off tribal lands, is how would the Bureau of Indian Affairs react to reopening agreements the tribes struck more than 20 years ago with the administration of Gov. Lowell P. Weicker Jr.?

Weicker’s deal with the tribes allowed them to offer slot machines at their Foxwoods and Mohegan Sun resorts in return for sharing 25 percent of gross revenue from the slots with the state, which reached a high of $430 million in 2007, the year before the recession, but has fallen steadily to $262 million in 2016.

Salazar warned that based on his experience, “I believe there is a substantial risk that the Tribes’ proposed amendments would not receive the requisite approval, in which case Connecticut’s entitlement to the 25-percent revenue stream would likely terminate.”

Echoing arguments previously made by MGM, Salazar said the 25-percent share might not pass muster again by the Bureau of Indian Affairs, and the agreement also might be rejected because it generally requires that shared revenue bear a relation to the cost of regulating Indian gaming. 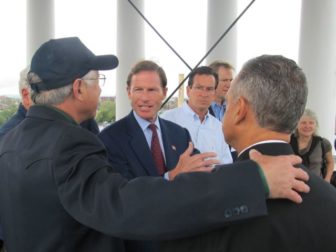 “In my opinion, there is a significant chance that such a review (even if it did not produce an outright termination of the 25 percent revenue entitlement) would lead the Department to require a reduction of the 25-percent royalty provision in the current compact,” he wrote. “That is because the 25-percent rate is unusually high. In fact, it is higher than the rate in the overwhelming majority of Indian gaming compacts and the Department has repeatedly disapproved even lower rates.”

“Scrutiny of the 25-percent rate is particularly likely given the length of time since that rate was adopted (two decades) and the changes in the marketplace that have occurred in that time,” he wrote. “In addition, it is important to bear in mind that the Mashantucket Pequot royalty agreement has never been reviewed or approved by the Department.”

Uri Clinton, a senior vice president and legal counsel for MGM, and two lobbyists, Jane Murphy and Paul Nunez, delivered the letter in a private meeting at the Capitol with the governor’s chief of staff, Brian Durand, and his legal counsel, Karen Buffkin.

Malloy has been noncommittal about casino expansion. His spokeswoman, Kelly Donnelly, offered no comment on Salazar’s letter other than to acknowledge he raises issues of interest to the governor and the General Assembly.

“We have requested a formal opinion from Attorney General Jepsen’s office,” she said. “One of the specific issues we are seeking their guidance on is regarding the risks associated with amending the compact. We look forward to their response to our request.”

Salazar offered in his letter to meet with Malloy, whom he has met at least once. As secretary, Salazar toured the Colt Armory in Hartford in 2011 with the governor and other officials when it was under consideration as a national park.

Salazar and Malloy each were backers of Hillary Clinton’s candidacy for president. Salazar was to lead a transition team had Clinton won.