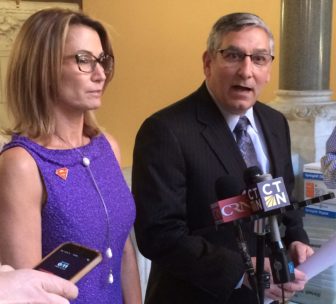 The Republican leaders of the Connecticut House and Senate politely distanced themselves Thursday from the push by President Trump and U.S. House Speaker Paul Ryan for the immediate passage of an alternative to the Affordable Care Act.

In a letter to the president and speaker, Sen. Len Fasano of North Haven and Rep. Themis Klarides of Derby said they shared the national Republican leaders’ concerns about Obamacare, but urged Trump and Ryan to avoid passage of a bill still being digested by state officials and members of Congress.

“Our nation must learn from what happened with Obamacare, and recognize that rushing to any repeal may not be in the best interest of our citizens,” they wrote. “Therefore, we ask that you work with Congress to give legislators across our nation the time to fully understand and vet the proposed policies.”

The letter was sent to reporters an hour before the Washington Post and others reported a vote on the alternative would be postponed in the absence of a clear majority — and two hours after Democratic leaders of the General Assembly distributed a similar letter to Trump that Klarides and Fasano declined to sign.

“We ask that rather than rush repeal, you give all of us time to fully understand the bill’s impact and make adjustments,” the Democrats wrote. “If this bill moves forward as is, we expect it will create a significant problem in our state budget or force us to abandon meaningful reforms that are working.”

About 85,000 Connecticut residents receive subsidies to purchase health coverage under the Affordable Care Act and another 217,000 get care through the law’s expansion of Medicaid. In total, nearly 770,000 state residents are covered by Medicaid.

The House Republican proposal, the American Health Care Act, eventually would make several changes to Medicaid, including giving the states options on how the federal share of the state-federal program would be calculated.

Instead of reimbursing states for a portion of whatever they spend to provide coverage to enrollees, states could receive a fixed amount of money for each person covered. Another option would be block grants.

“It affects a lot of people — and our budget,” Fasano said. “We should understand what the impact is on our health care and budget.”

Fasano said he was unmoved by the symbolism of a House vote on Thursday, the seventh anniversary of the passage of the Affordable Care Act.

“It’s good for the papers and media, but maybe that’s not necessarily how policy should be passed,” Fasano said.