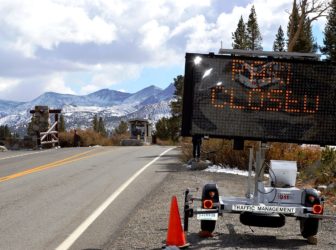 An entrance to Yosemite National Park during the 2013 federal government shutdown. (Credit: Nandaro via Creative Commons)

Washington – When Congress returns from its two-week recess next week it will have just days to approve a bill that would fund the federal budget and prevent a government shutdown that would affect a broad swath of Connecticut residents – from Head Start students to workers in the state’s defense industry.

The government has been running on a continuing resolution that funds government agencies at 2016 levels. That funding mechanism expires on April 28.

Unless Congress approves a budget, or agrees on another short-term continuing resolution, money would run out for a number of poverty programs, including school lunches, Temporary Assistance for Needy Families and possibly food stamps. The spigot also would be turned off for other federal grants, including those that fund mental health and environmental programs in Connecticut.

In October of 2013, the last time there was a budget crisis that resulted in a shutdown, a Head Start program in Bridgeport that provided services to 1,019 children was closed, resulting in great disruption to both parents and students.  Connecticut businesses also were harmed by an abrupt halt to processing of Small Business Administration loans.

A shutdown also would have a ripple effect on Connecticut’s defense industry. During the 2013 shutdown, hundreds of civilians in Connecticut who work for the Pentagon were furloughed, including federal workers who audit and approve operations of the state’s biggest defense contractors.

That prompted United Technologies Corp. to threaten to lay off about 5,000 employees.

“Without the required … inspectors, who were deemed non-essential federal employees, certain defense manufacturing work must be halted, which will result in employee furloughs,” said a United Technologies statement issued during the 2013 shutdown.

The 16-day shutdown of October 2013 was prompted by Republican demands that a budget bill strip funding for Planned Parenthood and the Affordable Care Act.

The latest shutdown threat is based on similar issues.

Attorney General Jeff Sessions is pushing to include a provision in the budget bill that would allow the stripping of all federal grants to “sanctuary” cities and states, and Trump wants it to include money to begin building a border wall between the United States and Mexico.

All these “riders” are considered poison pills by Democrats – and a number of moderate Republicans – that would prevent the budget bill from winning enough votes for approval.

He added, “If the president doesn’t interfere and insist on poison pill amendments to be shoved down the throat of the Congress, we can come up with agreement.”

Schumer has been working with Senate Majority Leader Mitch McConnell, R-Ky., for months  on a compromise.

But a deal crafted in the Senate, which is not likely to include the riders, may not be attractive to conservative Republicans in the House of Representatives.

Sen. Ted Cruz, R-Texas, on Monday told reporters he was concerned Democrats would force a closing of the federal government.

“I do have some concern that to appease the radical left, Chuck Schumer and the Democrats may do everything they can to try to provoke a shutdown,” he said.

Sen. Chris Murphy, D-Conn., a member of the Senate Appropriations Committee, pointed the finger of blame back at the GOP.

“I think there’s a risk of a shutdown if they insist on loading up the budget bill with riders and funding for the wall,” he said.

“Nobody really wants a shutdown,” he said.

But Ellis said there could be a “wrinkle.”  That’s if House Speaker Paul Ryan, R-Wis., insists on a bill that would win the votes of a majority of GOP members. Former House Speaker John Boehner, R-Ohio, provoked conservative Republicans with his adoption of a compromise budget bill that resulted in scores of GOP defectors and was approved with the help of House Democrats.

If the federal government shuts down, more than a million federal employees will be furloughed, although those deemed “essential,” will be required to work, without pay.

Military personnel also would report for duty, but like other essential personnel. It’s not clear whether they would get paid, although a way to pay them was found during the last shutdown.

Some federal benefits, including unemployment insurance and veterans’ benefits, could be delayed or reduced during the shutdown, and processing of income tax refunds would stop.

National parks, museums and many passport offices would be closed.

Social Security checks, which are paid from the Social Security Trust Fund and not appropriated money, would continue to be sent out. But new retirees would have to wait to sign up.

The U.S. Postal Service, which is also funded from money that is not appropriated, would continue to deliver the mail

On CNBC last week, Office of Management and Budget Director Mick Mulvaney downplayed the impact of a shutdown.

“It’s happened 17 times between 1976 and 1994,” he said. “Those lapses in funding used to be fairly typical …Social Security checks go out, military still exists. The FBI still chases bad guys. I think the consequences have been blown out of proportion.”