Geno to lawmakers: ‘If you are afraid…you shouldn’t be here’ 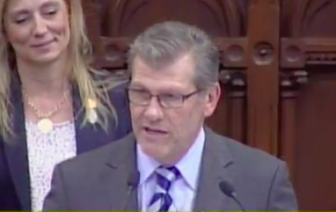 Ok, they didn’t take a knee. It’s hard to get more than 100 legislators to make a huddle. But Geno Auriemma still delivered a pep talk Wednesday, showing a more serious side as he addressed the Connecticut House of Representatives on the topic of “tough decisions.”

“That’s why you’re here, and that’s why we’re coaches. We get to make tough decisions,” said Auriemma, who showed little of the flippant humor he often displays at the annual UConn Husky Day at the State Capitol. “We get to make difficult choices. If we didn’t want that, we wouldn’t be here.”

Auriemma, 63, the winner of seven Naismith College Coach of the Year awards, seemed to a read his audience, a narrowly divided legislature with no clear path yet to resolving a budget crisis felt throughout state government, including the UConn campus in Storrs. In a gentle voice, he urged them to accept the glare that comes with tough calls and public life.

“You’re all here because you’ve been entrusted to make very difficult choices. And you’re not always going to make the right one. And you’re not gonna always be popular. And some decisions that you make you’ll get heavily criticized for,” Auriemma said. “And if you are afraid of criticism, then you shouldn’t be in here.”

The legislators interrupted him with applause.

Auriemma turned slightly more mischievous, turning to the topic of ambition. He smiled and described telling his players about the challengers and rewards of playing on the big stage that is women’s basketball at UConn.

The same is true of success, he said.

He left them with a warning about keeping focused on the job at hand, not glories that may await, oh, say in a coming election for higher office.

“So, be great going forward. We’ll all root for you.”