Scheff to lead change at Department of Developmental Services 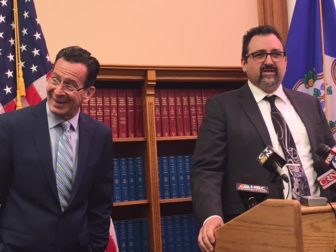 Acting Commissioner Jordan A. Scheff was named Friday by Gov. Dannel P. Malloy to lead a state Department of Developmental Services undergoing change as it looks to privatize group homes and continues to downsize the Southbury Training School.

“I think my biggest challenge is trying to provide stability for an organization that is in constant motion with many, many moving parts and making sure that we do so moving forward trying to provide for the health and safety of all those in my care every day,” Scheff said.

Scheff, 48, of Vernon, an executive with a non-profit provider of residential services for the disabled for a decade before joining the department as a regional director in 2012, has been the acting commissioner since Morna Murray stepped down as commissioner Jan. 20.

“Jordan has dedicated his career to this field,” Malloy said, introducing Scheff as his choice to represent the state in what the governor called a partnership with parents and families to care for up to 17,000 children and adults with developmental and intellectual disabilities.

It has been an uneasy partnership as the state has tried to shed costs, most recently by the privatization of group homes — a process that Malloy says has been suspended, at least in part to avoid adding tensions to the continuing concession talks with state employees.

“The bottom line is that in tough budgetary times we will allocate as much money as we can for this purpose, at the same time that we are constantly looking for areas in which we can save or provide services at less cost. It is a constant competition, I suppose,” Malloy said.

DDS has been especially vulnerable to cuts, since eligibility for the services it provides is set by state law, not federal mandates tied to federal aid. Waiting lists have grown for group homes and placement in day programs.

“We’re trying to make sure that everybody who needs a service can get a service at the time that’s most appropriate for them and that we’re balancing that as we move away from a legacy system of institutional settings,” Scheff said.

The Southbury Training School, which once housed more than 2,000 adults in cottages and other settings on a sprawling 1,600-acre campus that opened in 1940 with its own fire department and utilities, now has fewer than 240 residents.

“We are steadily moving towards a time when Southbury won’t provide services any more,” Scheff said.

The school closed another cottage on Tuesday.

Built in the 1930s, the school has been the subject of federal litigation since the 1980s that resulted initially in a decision to prohibit new admissions in favor of smaller, community housing. A settlement reached in 2010 dictates the terms for how the needs of residents will be evaluated and met as the state phases out the facility.

Southbury has been a source of tension. It is expensive to keep open at a time when the department has struggled to fund community-based day programs and reduce the waiting list for group homes. Scheff said the state is trying to meet its responsibilities by not forcing residents into inappropriate settings.

“We try to work with each individual one at a time to find an opportunity that may be different than Southbury going forward,” Scheff said. “We meet regularly. We have dedicated staff to trying to help make that happen, but at the time trying to recognize they are individuals who have their own needs and their own lives — trying not to get in a situation where we’re pitting the needs of one group of people against the needs of other people.”

The department’s efforts to privatize about 40 group homes have been difficult, plagued by challenges from state employee unions and, in some cases, requests for proposals that have not attracted qualified bidders.

Malloy said Friday the state has effectively suspended the RFP process until negotiations with a coalition of state employee unions are concluded. The governor said the state is trying to be “good bargaining partners.”

“We’re holding. We think it can be built into an overall agreement as to what we would do in the future,” Malloy said. “We have not wanted to be provocative, so we have chosen not to be provocative.”