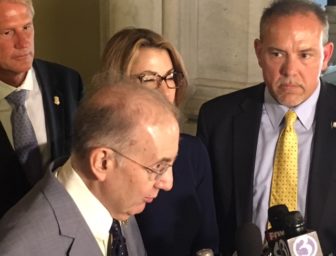 The Democratic governor and top lawmakers from both parties also agreed to develop new proposals to counter a major erosion in income tax receipts. The governor said he would deliver a plan by May 12.

But officials did not reach an understanding Tuesday on whether to open future budget talks to the news media.

“We need to get to the target number at the very least, and we’re not there,” the governor told Capitol reporters, referring to his call for worker concessions worth $700 million next fiscal year and $869 million in 2018-19. “And a lot of time has passed.”

The governor, whose administration has been talking informally with unions since November, also repeated his statement from last week that preparation for another round of worker layoffs is necessary given the lack of progress.

“That’s not a threat,” he said. “It’s just that we have to comply with the law.”

All unions have preliminary notification requirements in their contracts with the state. These warning periods, which range from a few months to a year, must be observed before any workers can be removed from their jobs.

The administration notified unions last month that nearly 1,100 workers could face layoffs in May — the first stage in an alternative cost-cutting plan if the concessions talks aren’t successful.

Council 4 of the American Federation of State, County and Municipal Employees, one of the largest state employee unions, posted a response to the Malloy administration’s notices last month on the union website.

“Layoffs and service cuts threaten public health and safety, our children’s education, and our state’s future,” the statement reads. “They will hurt our economy and lead to even more fiscal crises. Connecticut needs a balanced approach to resolve our budget deficit that isn’t entirely dependent on damaging state services to meet that goal.”

Malloy wasn’t the only official to develop a budget for the next two fiscal years that relies on concessions.

Republican and Democratic legislators both used the same concessions savings estimates as Malloy in plans they developed last month.

“We’re looking forward to (concessions talks) coming to a close and being voted on by the membership so we all can move forward with our budget,” House Speaker Joe Aresimowicz, D-Berlin, said.

“That (concessions) piece is even more essential now than it was before,” Senate President Pro Tem Martin M. Looney, D-New Haven, said, citing the downward revenue trend identified over the past two weeks.

Fiscal analysts downgraded anticipated revenues for the next two fiscal years by $1.46 billion — nearly $600 million in the next fiscal year and $865 million in 2018-19 — largely because of eroding income tax receipts.

Republican leaders, like their Democratic counterparts, offered few details about their 90-minute meeting with Malloy.

“We have to start somewhere,” House Minority Leader Themis Klarides, D-Derby, said. “Today was our starting point and we’ll continue down the road from here.”