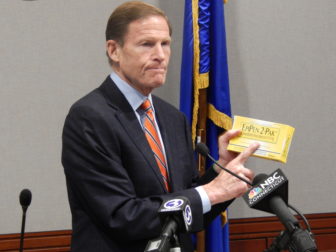 Washington – A year after it was embroiled in scandal for jacking up the price of EpiPen injectors of a life saving anti-allergy medicine, the company that makes them is accused of overcharging  state and federal governments too, by $1.27 billion.

Sen. Richard Blumenthal wants some of that money returned to Connecticut.

Earlier this week, Sen. Chuck Grassley, R-Iowa, said the Department of Health and Human Services has calculated that Mylan pharmaceuticals may have overcharged about $1.27 billion for EpiPens through the Medicaid program, a joint state-federal health program for the poor.

“If that doesn’t make you angry, I don’t know what will,” Blumenthal said.

After consumers revolted at Mylan’s sharp increase in the price of the auto-injectors, from $100  when it bought the drug in 2007 to $608 last year,  lawmakers investigating the price hikes noticed Mylan had classified EpiPen as a generic under the Medicaid program.

Makers of brand-name drugs have to pay higher rebates to states than makers of generics — 23.1 percent versus 13 percent. They also have to pay additional rebates if their prices rise more than inflation.

Mylan was first accused of overcharging the government for EpiPen in October. Eventually it announced it had agreed to a $465 million settlement with the Department of Justice. Under the terms of the settlement, Mylan would not admit to any wrongdoing for classifying its drug as a generic rather than a brand name medication.

Blumenthal has determined that Connecticut is owed $1.1 million for overcharges in the Medicaid program last year, “and perhaps more in preceding years.”

According to the Connecticut Department of Social Services, Connecticut Medicaid paid pharmacies about $10.7 million in 2016 — that’s  before factoring in Mylan’s rebates and 50 percent federal reimbursement for that expense.

Mylan did not have an immediate response to Blumenthal’s push to have the Justice Department scrap the settlement on Medicaid overcharges. But company executives did agree to meet with Grassley next week to discuss the rebate issue.

One reason Mylan was able to increase its cost of the EpiPen is that–until recently — it had little or no competition.

But CVS is now selling a rival, generic version of EpiPen at about a sixth of the price of the brand-name version.