In a letter signed by 11 Republicans, the group objected to a Democratic argument that any state resources to address this problem should be appropriated only through the main budget bill adopted annually, or the related budget policy implementation bills.

Republicans are expected to vote against those measures if they close a major deficit in the next two-year budget with tax increases, deep municipal aid cuts and with a union concessions framework that extends a controversial benefits program for five years.

But many Republicans are expected to join Democrats in backing a proposal to spend $11.9 million next fiscal year to assist eastern Connecticut homeowners with failing foundations.

What do GOP lawmakers do, though, if the homeowner assistance funding they like is rolled into a budget they don’t?

“The pointed threat by House Democratic leaders to include the crumbling foundations issue in the budget is yet another example of their inability to do right by the people we serve,” House Republicans wrote. “Playing politics with the lives of thousands of people that are watching their homes crumble before their eyes is just plain wrong. The crumbling foundations matter should be considered on its own merits, separate from the budget.”

Although a final bill still is being negotiated, components under consideration would provide grants to replace or repair crumbling foundations and establish a low-interest loan program in collaboration with the Connecticut Housing Finance Authority. 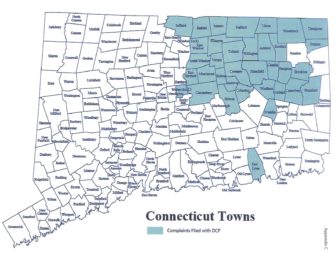 The foundations are crumbling, at least in part, because of quantities of the mineral pyrrhotite present in the concrete aggregate, according to a January report from the Department of Consumer Protection.

Many homeowners’ claims have been denied by insurance companies on grounds that the problem did not meet their policies’ definition of a structural collapse — leaving residents to face the huge cost of foundation replacement or repair.

“The problem is it has a fiscal note — a major fiscal note — which we can’t run right now,” House Majority Leader Matt Ritter, D-Hartford, said of the crumbling foundations assistance bill and its nearly $12 million cost. “So it’s probably going to have to go in the budget or the implementer.”

Traditionally, appropriations are only approved through the budget bill and implementation measures — but there have been exceptions, including one with a cost very similar to the foundation assistance bill.

In the spring of 2008, the Democrat-controlled House and Senate did not want to make adjustments to the second-year of a two-year budget plan, despite analysts’ warnings that weak tax receipts put the plan at risk of deficit.

(By August 2008, one month after the fiscal year had begun, the budget was $139 million in deficit.)

But Aresimowicz also said it is just one example of the many types of assistance Republican lawmakers press him for regularly to support their respective districts.

“All of the time they are cheerleading for their projects,” he said. “How is it fair to my members that we take the difficult (budget) votes that enable those projects to go forward, they vote ‘no,’ but then they are still able to go home and claim credit for their projects?”

“Too much bipartisan effort has gone into finding a path forward for this devastating tragedy,” Republican legislators wrote Friday. “The crumbling foundation issue is not a Republican or Democratic issue. It is truly a concern for the entire state of Connecticut.”