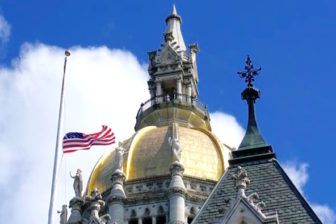 The U.S. flag flies at half staff over the state Capitol after the attack on gay nightclub in Orlando last year.

On the second-to-last day of the 2017 session, the evenly divided Senate turned to non-controversial House bills awaiting final action while legislators worked outside the chamber on potential compromises to deadlocked measures.

The Senate has passed several of those bills since gaveling in Tuesday afternoon, including bills on hate crimes, opioids, eye care in the digital age and pregnant women in the workplace.

Legislation that sets minimum fines and generally increases the penalties for hate crimes in Connecticut is on its way to the desk of Gov. Dannel P. Malloy after unanimously winning final passage Tuesday in the Senate. The House previously voted unanimously for the bill.

The Connecticut legislature largely avoided partisanship this session in pushing for a legislative response to a wave of anti-Semitism and anti-Muslim incidents that coincided with a presidential campaign in which Donald J. Trump called for “a total and complete shutdown of Muslims entering the United States.”

The Anti-Defamation League of Connecticut says incidents of bias directed against Jewish institutions, including vandalism at cemeteries and bomb threats to Jewish Community Centers and schools in West Hartford, Woodbridge and elsewhere, rose sharply during 2016.

The bill defines “religiously-affiliated community center” for the purpose of the threatening crimes and stiffens the penalty for desecrating a house of worship. It adds gender to the list of protected classes regarding crimes of intimidation.

The opioid bill was a revised version of legislation proposed by Gov. Dannel P. Malloy. It now heads to his desk.

“Opioid addiction and prescription drug abuse is a disease that is impacting nearly every community and people of every background. It is a complex crisis that does not have one root cause, nor does it have a simple solution, but we need to do everything in our power to treat and prevent it,” Malloy said.“The General Assembly’s unanimous support of this bill sends a clear message that we are united in tackling this issue together.”

The Senate joined the House in unanimously approving, and sending to the governor, eye care legislation that lawmakers are billing as a consumer protection measure in the digital age.

Local optometrists said smartphone apps that inexpensively check eyes and renew prescriptions for contact lenses raise questions of efficacy and safety for consumers. And they were a threat to their business. The optometrists waged a successful lobbying campaign to win support for language blocking the use of “a remote refractive device” – such as one on a smartphone – “as the sole basis for issuing an initial prescription” or renewal.

In other action, the Senate unanimously approved a bill to define specific protections for pregnant women who are in the workplace or seeking employment, building on the federal Pregnancy Discrimination Act of 1978. It received bipartisan support in the House and heads to the governor’s desk.