A British bet on OTB in Connecticut’s roiled gambling market 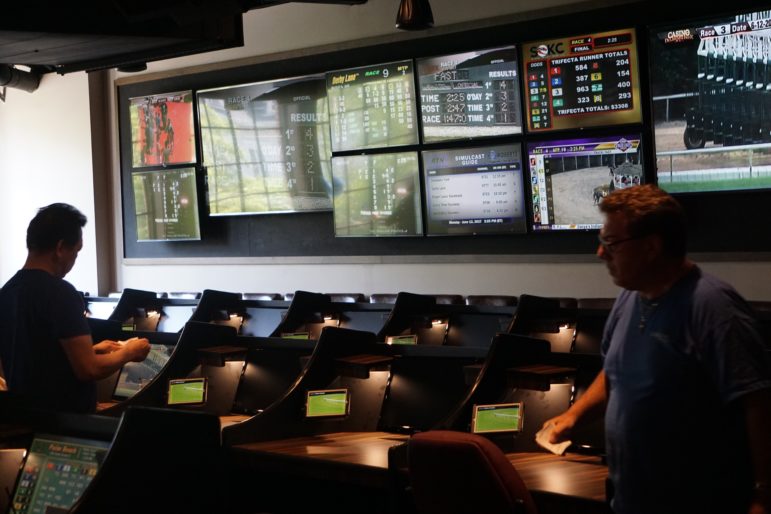 Upstairs at Winners, the new OTB in Bobby V’s in Stamford. A bigger video screen is over the bar.

Stamford — Ted Taylor settled onto an upholstered leather bench in an unfinished booth at the new Bobby Valentine’s restaurant and sports bar, the Connecticut Gold Coast’s introduction to a plusher version of what’s been a shrinking, down-market gambling niche — off-tracking betting.

He is from Sheffield, England, late of Her Majesty’s Royal Naval Service and currently in the  employ of Sportech PLC, the British company that owns the Connecticut rights to pari-mutuel betting on horses, dogs and jai alai. State records show gamblers bet $88 million last year at the state’s 16 OTB facilities or by computer or smartphone. Yes, there’s an app for that.

Taylor showed off the new place before its opening last Friday, raising his voice above the sounds of cordless drills and hammering, pausing to check with an architect and chef, as he talked about the transitional state of gambling in Connecticut, the improbable home of two of the world’s largest casinos, the scene of a frantic lobbying fight over the rights to build a third.

He’s bullish on his downstate investment in 20,000 square feet of commercial space spread over three levels, the basement still a work in progress. He is less enthused about the expensively refurbished Bradley Teletheater in Windsor Locks, if only because the General Assembly just authorized a new casino four miles away in East Windsor.

“How do I end up being screwed?” Taylor said. “How is that fair?”

It’s a hard sentiment softened by a matter-of-tone that suggests Taylor already is muddling on, even if he warned legislators that a casino in East Windsor would cost 35 percent of his business in Windsor Locks and 20 percent at his other closest OTBs in Manchester, Hartford and New Britain. He said he has the standing to sue, but not the intent. 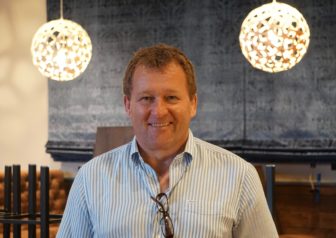 If the casino is built, Sportech figures to be collateral damage at a time when it is trying to reinvent the OTB business by marrying it to food, drink, comfy surroundings and lots and lots of technology, from iPads to a two-story high-definition screen that looms over a long bar. Not counting the latest project, Sportech reports spending $20 million on its facilities over the past six years, including about $5 million at Bradley, where there also is a Bobby V’s, named for the former baseball player and manager.

The new Bobby V’s is on Atlantic in downtown Stamford, around the corner from a Capital Grille and directly across the street from the Basilica of Saint John the Evangelist, allowing worshippers to go Mass at 4 p.m. on a Saturday and still get a bet down on the Derby before post time at Churchill Downs. Taylor assures that he and the monsignor are getting on just fine.

Taylor, 57, who flirted with playing professional rugby after 10 years as a naval officer, a career he attributes to his “being tall and able to walk in a straight line,” shrugged when asked if he is now a restaurateur who offers gambling, or a gambling entrepreneur who stocks a more-than-decent bar, where the top shelf features the pricey Irish whiskey, Midleton.

“Yeah, it’s a little bit of both,” Taylor said. “It’s the next generation of a gaming facility in accordance with our license. We know that what people want is great quality food and entertainment, and then some of them will game — and vice versa. So it’s presenting what is known historically as the OTB market in a different perspective, with a lot more style and panache than people might expect, to try to recover from years of not being so great.”

The movie image of the old OTB is a harshly lit storefront, floor littered with losing racing slips and cigarette butts. Winners, the Sportech-branded betting parlor ensconced on the second floor of Bobby V’s, is soft light, dark woods and a mix of tables and long rows of betting terminals. For true students of the ponies, there is a quiet room off to the side, where bets can made from what look like study carrels at a library.

Sportech has similar facilities in the Netherlands and California.

MGM Resorts International set off a chain reaction by winning a license to open a casino resort in Springfield, a more convenient ride up I-91 from Hartford than the trip east to the two massive tribal casinos, Foxwoods Resort and Mohegan Sun, where gamblers collectively lost $1.56 billion at slots and table games in 2016, according to public financial records.

The Mashantucket Pequot and Mohegan tribal nations, owners of the casinos, convinced legislators to pass a law allowing them to jointly build a casino just off I-91 in East Windsor, about halfway between Hartford and Springfield, to blunt the loss of market share to Massachusetts when MGM Springfield opens in late 2018.

What about blunting the loss of Sportech’s market share? Legislators declined to make him whole with a cut of the gross gaming revenues from the new casino, an approach followed in some other states. Instead, they offered him a consolation prize: Raising the statutory cap on OTB locations from 18 to 24.

Since Taylor’s company now operates 16 OTB facilities, that means it already has two unused licenses, evidence that the state of Connecticut’s blessing wasn’t what was holding Sportech back from expansion. According to a report submitted to the legislature by a consultant Taylor hired, Spectrum Gaming, the betting handle for OTB in North America peaked in 2003. 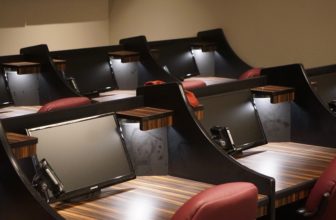 Betting carrels in a private room at the OTB in Stamford.

That year, gross sales at OTB were nearly $280 million in Connecticut, a relative pittance in a state where residents spent $865 million the same year on lottery tickets and close to $52 million on charitable gaming. Connecticut Lottery sales cracked $1 billion in 2011 and have continued to increase, while the rest of the state’s legalized gambling market has suffered, squeezed by out-of-state competition.

The state of Connecticut, of course, has a vested interest in gambling. Its annual cut from the billions wagered on slot machines, the lottery, OTB and charitable games is about $590 million, down from a high of $717 million in 2006. That was the year Yonkers Raceway opened the Empire City casino, putting 5,300 video slot machines just off I-95 between New Yorkers and the Connecticut casinos.

Under an exclusivity deal with the tribes, Connecticut gets 25 percent of the gross revenues from slots, worth about $266 million and falling from its high of $430 million in 2007, the year after Yonkers opened and before the Great Recession of 2008. The lottery contributes about $320 million annually to the state’s general fund. OTB chips in about $3 million, charitable games another $400,000.

The only major purveyors of gambling who don’t pay tribute to Hartford are the sports books, the ones who take bets the old-fashioned way, illegally and off the books, or on line from the legal safety of some off-shore haven. Congress has placed strict limits on sport betting, but Taylor and others in the business wonder how long that will last.

The recently passed casino bill authorizes the state to study and prepare for sports betting, should it become legal.

Taylor estimates that illegal sports gambling in Connecticut could be as much a billion dollars. He noted that the state spends little time trying to stop it, an assessment shared by law enforcement, so why not legalize it, regulate and tax it?

Legalized is in the open, so anomalies in betting can be tracked as evidence of a possible fix. Adam Silver, the NBA commissioner, broke with the rest of professional sports in the U.S. in 2014 with an op-ed in the New York Times urging a different approach.

OTB works on tight margins. Gamblers bet through Sportech, not against it. Pari-mutuel is a fancy term for pool betting. All the bets go into a giant pot, and the winners divide the money in proportion to the size of their wagers, minus the take by Sportech, the track where the horses actually ran, and their silent partner, Connecticut.

Taylor says 8 percent goes to the track, 3.5 percent to the state and a 1.5 percent for various fees to keep the electronic system going.

Sportech wins on volume, not by a specific horse’s winning or losing. That means Taylor gets to root for his customers to win, to leave happy — and come back. When they bet on the Belmont, they are betting against horseplayers in New York, plus those who placed wagers on OTBs across the county.