Connecticut’s biz ranking bumps up as a tech company expands 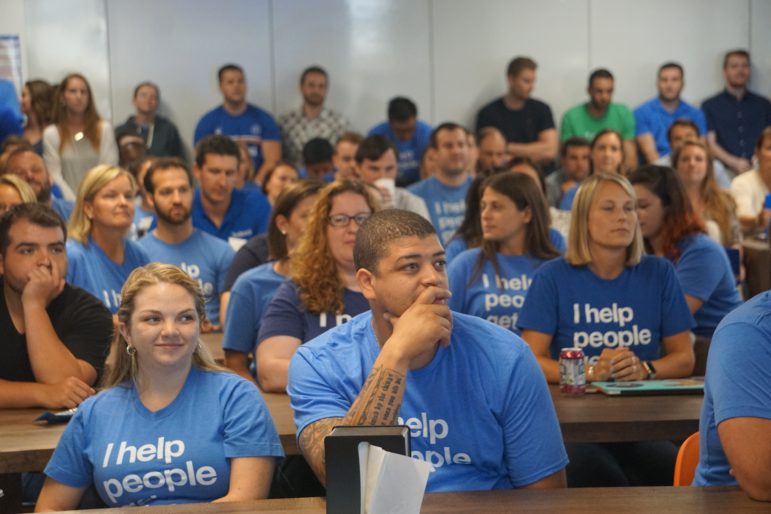 The workforce at Indeed is young, diverse and what Connecticut is trying to attract.

Stamford — They are young, tech savvy, growing — and they are here. In a state with an aging workforce and an outmoded employment infrastructure of suburban office parks like the one famously abandoned by General Electric, the expansion of a thriving web company called Indeed was sufficient cause for celebration Wednesday by Gov. Dannel P. Malloy.

Indeed, the world’s largest on-line employment site, is growing its Connecticut workforce from 700 to as many as 1,200, attracted by a walkable, vibrant downtown, an educated workforce — and the state’s offer of a 15-year, low-interest loan of $7 million that is forgivable if the company meets employment goals. It also is eligible for up to $15 million in tax credits.

The announcement coincided with a rare bit of good news in the game of state business rankings: CNBC jumped Connecticut 10 places to 33rd, tying with two other states as the most improved, a bump that seemed to have more to do with greater weight given to the quality of the state’s schools and workforce than an overnight change in business climate.

CNBC rated the state’s schools as third-best in the country and its work force as seventh. Both had been ranked 18th a year ago. Of the 10 elements the business network assesses, the state ranked near the bottom on four: infrastructure (47th), cost of doing business (43rd), economy (41st), and cost of living (45th).

Catherine Smith, the state’s economic-development commissioner, said she lobbied CNBC to take another look at education and work force quality, aspects that she thought the network had underrated a year ago. She said Connecticut also benefitted from CNBC’s staying away from what she and Malloy consider a political measure — whether a state is a right-to-work state.

Brian Flaherty, a Republican former legislator who is vice president of the Connecticut Business and Industry Association, said the improved ranking is heartening.

“It’s a nice jump up the charts, and two strong reasons why that happened are the strength and productivity of our workforce and education,” Flaherty said. “If we are going to move up, those are very good reasons to move up.”

Improving the business climate should be part of the debate as lawmakers continue to seek a way to balance the budget for the fiscal year that began on July 1, he said.

“Those numbers ought to be on every legislator’s desk as they decide what to do next,” Flaherty said. “The General Assembly needs to deliver to our state a budget we can grow on, otherwise our workforce and education system references in the CNBC ratings will go for naught.” 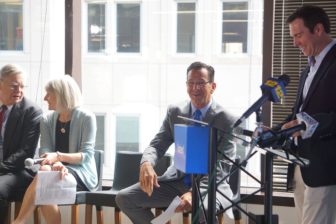 Malloy, a Democrat in the third year of his second and final term as governor, said the state is getting better on economic development, even if the arrival of new companies like Charter Communication don’t get the same attention as the departure of two Fortune 50 headquarters: GE to Boston, and Aetna’s planned move of senior staff to New York City.

“Quite frankly, we’re getting better at understanding the needs of the marketplace. That was largely ignored in Connecticut state government for a very long period of time,” Malloy said. “So I look forward to higher rankings in the near future. I think this is a fairer rating. I mean, they don’t take points off on your politics, and some of the ratings do.”

Dave O’Neill, the chief financial officer of Indeed, welcomed the governor, Smith and state legislators to a cafeteria crowded with a workforce that seem entirely composed of recent college graduates. A foosball table sat in a prominent spot. On a patio, were two sets of the bean-bag game, corn hole.

“The work force that we’re looking for is in sales and client-services-type functions,” O’Neill said. “It generally attracts a highly educated, tech-savvy employee. People right out of college can jump right into these jobs.”

One of the founders of the company is from Fairfield County, the other from Austin. Indeed has offices in both places, as well as in New York. O’Neill said Indeed has had no trouble recruiting to Stamford, where many employees can walk to work.

Rep. William Tong, D-Stamford, who co-chairs a commission on economic competitiveness, said the presence of Indeed reinforces what the commission has found.

“It proves what we know to be true — and that is that we are a great destination and alternative to Brooklyn, to New Jersey and to New York City and to Boston, of course,” Tong said. “But in this general area we are a great place to do business and run a company. We have space, we have infrastructure, we have trains, we have good housing stock. So, this demonstrates this is possible.”