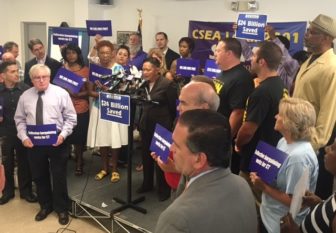 Union representatives at a press conference announcing the ratification of a concessions agreement with the state.

Unionized state employees have voted overwhelmingly to ratify the concession deal negotiated with the administration of Gov. Dannel P. Malloy, shifting the focus to a closely divided General Assembly, where Republicans say they will attempt to reject an agreement worth an estimated $1.57 billion over two years.

The State Employees Bargaining Agent Coalition announced late Tuesday morning that 85 percent of the votes cast were in favor of accepting concessions that will freeze wages and 83 percent backed increased contributions for health and pensions and other benefits-related concessions.

Union leaders, who reported the vote tallies at the Hartford offices of the union local representing state planners, architects and engineers, also pressed hard for tax hikes on wealthy households and major corporations — something Malloy and most lawmakers have opposed this year.

Building support for concessions ‘was not easy’

“This was not easy,” Salvatore Luciano, executive director of Council 4 of the American Federation of State, County and Municipal Employees — the largest state employee union — said of the near-unanimous vote. “We hoped if we explained it, everyone would pass it.”

Lori J. Pelletier, president of the Connecticut AFL-CIO, said it should come as no surprise that workers, who also granted concessions in 2009 and in 2011, did so again.

“These are people who provide services to the state, but they also are taxpayers,” she said. “Employees were presented with a problem and asked to chip in — again — and help to fix it, and they did.”

All 33 of the bargaining units that cast ballots on wage-related concessions endorsed the deal. Units representing state police and assistant attorneys general did not vote on wage givebacks.

Wage agreements are decided on a unit-by-unit basis. Those that agreed to the three-year pay freeze and three furlough days per worker the governor sought would be exempted from layoffs for the next four years.

Concessions involving health coverage, pensions and other benefits are decided collectively by the 16-union labor coalition, and the changes would affect all of the roughly 46,000 unionized state employees — if the deal is ratified by the legislature.

Fifteen of the 16 parent unions within the coalition endorsed the benefits-related concessions.

The state police troopers’ union also belongs to SEBAC but currently is not a dues-paying member in good standing, so its ballots on benefits concessions were not counted. 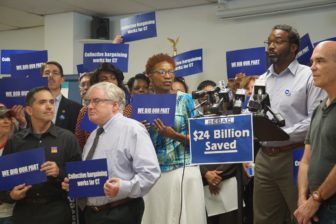 Union representatives show signs saying, “We did our part” and “Collective bargaining works for CT.”

Wage concessions were expected to provide nearly half of the $701 million in savings the full concessions plan reportedly was worth this fiscal year, and 42 percent of the $869 million total in 2018-19.

In return, the contract guaranteeing these benefits would be extended for five years, pushing its expiration date from June 30, 2022, to mid-2027.

“State unions held up their end of the bargain — negotiating in good faith, leading their members through some tough changes, and ultimately rallying their members,” Malloy said in a statement. “Now, it’s up to the legislature to do their part and approve this agreement. We will continue to be available to meet with any legislator who may have questions about the value and significance of this agreement.”

House Speaker Joe Aresimowicz, D-Berlin, and Senate President Pro Tem Martin M. Looney, D-New Haven, who each support the concessions negotiated by Malloy, said they will schedule votes in each chamber on the deal. Without a vote, the deal could not take effect until the next regular session in 2018.

Both Pelletier and Luciano cautioned that the overwhelming vote for concessions — conducted over the past two weeks — should not be viewed as a sign that labor is pleased with all policies at the state Capitol.

Unions’ calls for a more progressive income tax largely have been rebuffed by Malloy and most legislators this year.

And some union officials said workers were dismayed when the legislature failed to cancel raises for state judges on July 1.

“Some of the people we talked to were disappointed” by these decisions, Luciano said.

The concessions vote does not reflect union approval of these policy choices, Pelletier said. “I don’t think one thing has anything to do with the other,” she said.

‘Time for the legislators to do their part’

“Today we’ve gathered here to say middle-class workers have done their part,” said Darnell Ford, a delegate for SEIU 1199, New England and an employee at the Department of Children and Families. “Now is the time for the legislators to do their part. We can’t be the only part in this process.” 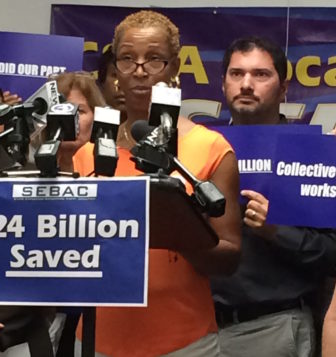 Ford said union members believe close to $1 billion in new income tax receipts should be raised from the wealthy by boosting capital gains rates and focusing on hedge fund managers and other financial services professionals who benefit from the “carried interest” loophole in the federal income tax.

This loophole allows hedge fund managers to pay much lower tax rates on their personal earnings than the top marginal rate within the federal income tax system.

“We have sacrificed to make Connecticut stronger,” said Cheryl Womack, a registered nurse for the past 11 years at the Blue Hills substance abuse hospital in Hartford. “Why have they only asked for sacrifices from working people?”

Republican legislators, who consistently have opposed a more progressive income tax system and higher corporation tax rates for years, have been joined recently by many Democrats in the legislature, who say declining income tax receipts are a sign that the wealthy and big businesses are leaving Connecticut in response to state tax policy.

Are the concessions worth enough?

Meanwhile House and Senate Republican leaders have criticized the concessions deal on several grounds, but they particularly cited the five-year extension of the benefits contract. GOP lawmakers noted that even with the concessions, state government still would not save enough annually to cover the full cost of all retirement benefits promised to present-day workers — leaving some expenses to be covered by future taxpayers.

One of the single-largest factors behind the deficits that have plagued state budgets since the last recession are surging retirement benefit costs. Those cost surges, caused chiefly by close to eight decades of inadequate savings habits, are projected to worsen considerably between now and the mid-2030s.

Agnes Quinones, an official with the state educators’ union, had a response for those who argue the concessions aren’t sufficient. “What those critics fail to understand is that the best agreements are measured not by how much pain they cause, but are measured by how much good they do,” she said.

Senate Republican leader Len Fasano of North Haven, who criticized the concessions deal, said the state’s income and corporate tax base has shrunk since major tax hikes were enacted in 2011 and 2015.

“Those people are leaving,” Fasano said, adding that Democratic legislators — many of whom have advocated for higher tax rates on the wealthy and on corporations in the past — are steering clear of these areas as well this year. 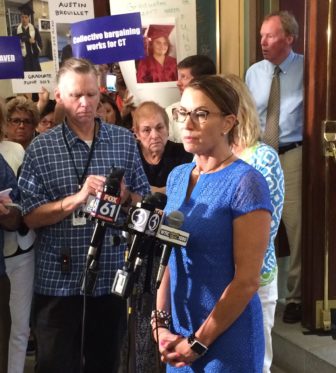 “If you look at the Democratic (budget) proposal, they recognize those people are leaving,” he said. “… They recognize you cannot get any more money from those groups.”

“I think that they know that that’s the best deal in the United States of America,” she said Tuesday while reaffirming her opposition to the deal. “I don’t blame them for voting for that.”

Aresimowicz, the House speaker, warned legislators against underestimating the value of concessions, worth $1.57 billion over this fiscal year and next — and the third concessions deal in nine years.

I think that’s outstanding,” he said. “I really appreciate the efforts of state employee union leadership and the state employees themselves, voting that through and stepping up yet once again for the state of Connecticut.”

“Independent analysts confirm that this agreement makes important long-term changes to our state employee pension and benefit programs resulting in significant savings for taxpayers – roughly $24 billion over the next 20 years,” said Looney, the top Senate leader. “The Senate will debate the agreement on the floor and hold a vote. I urge its passage.”