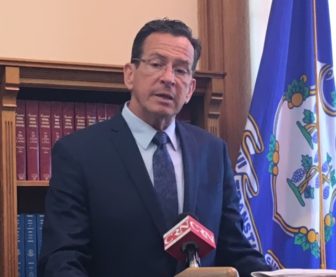 After facing a projected deficit of nearly $400 million three months ago, Connecticut may have ended the last fiscal year with a slight surplus, Gov. Dannel P. Malloy’s administration reported Thursday.

Though the 2016-17 fiscal year ended on June 30, the comptroller’s office does not officially close the books until late September. Some tax revenues received during the summer months still accrue back to the previous budget year.

So while the numbers remain in flux, the governor’s budget office projected a $35.7 million surplus for the outgoing fiscal year in its monthly forecast Thursday.

And while that represents less than one-fifth of 1 percent of the General Fund, it’s a far cry from the $390 million gap that was projected back on April 17 — right after Malloy and lawmakers learned state income tax receipts had tanked following the annual tax return filing deadline.

Malloy used his limited authority to cut spending unilaterally to immediately trim the shortfall to $323 million.

Additional spending cuts and transfers from off-budget accounts, coupled with a May surge in corporation tax receipts, whittled the potential shortfall down to $107 million by June 20.

And over the past month, late growth in federal grants and inheritance and estate tax receipts, combined with another $56 million in cost-cutting by various agencies produced the $35.7 million surplus projection.

What could have been hundreds of millions of dollars in deficit will actually, I believe, when everything is said and done — produce a slight surplus,” the governor told Capitol reporters.

If that forecast holds, it also means Connecticut would be able to avoid tapping its modest budget reserve for the first time in three years.

The reserve currently holds $235.6 million, which represents about 1.3 percent of annual operating costs.

Comptroller Kevin P. Lembo recommends a reserve of 15 percent, in part because of the volatile nature of Connecticut’s income tax, which relies significantly on capital gains, dividends and other investment-related earnings.