Malloy, legislators struggle over uncertain path to a budget

Gov. Dannel P. Malloy and Democratic legislators are struggling to frame a budget deal that requires Malloy to compromise on taxes, liberals to accept structural changes in municipal aid and moderates to embrace a new labor deal.

After three weeks without a budget in the fiscal year that began July 1, prompting Malloy to cut funding to non-profits that serve the disabled and other vulnerable populations, there are signs of compromise and continued conflict.

One potential framework calls for Malloy and lawmakers to strike a balance between an increase in the 6.35-percent sales tax sought by House Democrats and a reduced, sustainable level of spending on local aid and social services demanded by the governor.

But finding such a balance would be moot if the legislature rejects a concession deal Malloy struck with state employees to produce $700 million in savings this year in return for layoff protections and extending the contract for retirement and health benefits.

The General Assembly is so closely divided between the Democratic majority and Republican minority that a single Democratic senator could scuttle the labor deal, instantly growing the current-year shortfall from a daunting $2.3 billion to a devastating $3 billion.

Talks would have to begin anew.

The delicate dynamics of the budget talks have emerged in recent days in interviews with sources familiar with negotiations, most of whom declined to be quoted because of the sensitivity of talks, as well as in some public statements.

Malloy, who has steadfastly insisted he wanted to close a current-year shortfall primarily by controlling spending, publicly demonstrated a new flexibility Thursday on the sales tax. But he did not seem to expect a quick resolution.

“This process has a way to go,” Malloy told reporters.

Democrats barely have a working majority

Budget talks between administration officials and Democratic legislators slowed — but didn’t stop — late Thursday as officials questioned whether the legislature could ratify the concessions deal, a linchpin in all Democratic budget proposals.

With Republican leadership vehemently opposed to the concession deal — a position they insist is good public policy now, if not even better politics during the 2018 campaign for control of the legislature — the legislative vote for ratification is likely to split along party lines, leaving Democrats with little room for defections. 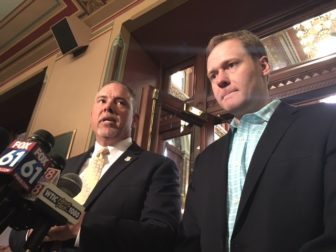 House Speaker Joe Aresimowicz, D-Berlin, and House Majority Leader Matt Ritter, D-Hartford, have expressed confidence they could garner the 76 votes necessary for a ratification vote that could come as soon as Monday, even if they only have three votes to spare.

“Many of my members have concerns, but they fully appreciate the steps the state employees took,” Aresimowicz said. “For the most part they’re all willing to vote for it and move on to the budget process.”

No such statements have come from Senate Democrats. With the chamber evenly split, all 18 Democrats must vote for ratification if every Republican is present, allowing Lt. Gov. Nancy Wyman to cast a tie-breaking vote in favor.

“We have not yet done a final count,” said Senate President Pro Tem Martin M. Looney, D-New Haven, avoiding a question about potential defectors. “Some members needed to get more information. We think there’s been an opportunity for that. … Now is the time to seriously grapple with it.”

None of the three moderate Senate Democrats known as having reservations with the deal — Paul Doyle of Wethersfield, Joan Hartley of Waterbury or Gayle Slossberg of Milford — could be reached for comment after they met Thursday with Looney.

Malloy says the concessions that unions ratified overwhelmingly this week would save $1.57 billion this fiscal year and next combined, closing almost one-third of the $5.1 billion deficit in the next biennial budget. Moderate Democrats say they fear the savings are not sufficient given what the state must provide in return: four years of layoff protection and a five-year extension of the benefits contract from 2022 through 2027.

The GOP leaders, Sen. Len Fasano of North Haven and Rep. Themis Klarides of Derby, have been unable to agree on a unified Republican budget proposal, but each claims that Connecticut can achieve similar or greater savings unilaterally, by enacting changes to collective bargaining laws and related statutes. 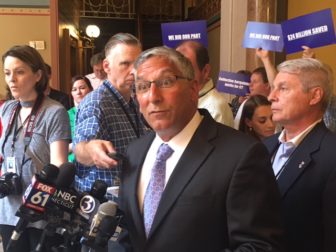 Malloy said this week’s ratification by the unions was “an important milestone” in the quest for a new budget, adding a warning to any who would reject it: The continued budget stalemate would be on your hands.

“People would have to answer to their constituents why the budget would have to be cut hundreds and hundreds of millions of dollars in addition to what it would take to get to a balanced budget today,” he said.

Fasano said if just one chamber rejects the concessions deal, he will press for passage of a Senate Republican budget. He said the legislature’s vote on concessions should not hinge on short-term savings.

“The only issue on the deal on the contracts with the union is: Is this or is this not a good deal for the state of Connecticut?” Fasano said.

Compromise on the sales tax?

The governor took a softer tone Thursday when it came to the idea of increasing the sales tax, though sources say no one expects him to accept the increase to 6.99 percent sought by liberal House Democrats.

Malloy expressed dismay on June 29 when House Democratic leaders proposed boosting the sales tax from 6.35 percent to 6.99 percent and adding surcharges on restaurant and hotel transactions, saying leadership was ignoring his directive that “we should not lead with taxes.”

House Democrats said this revenue would mitigate the harshest of cuts to municipal aid and social services proposed by the governor. But the administration has cast the cuts as structural changes necessary to find a sustainable level of state spending.

Sources said the administration expressed a willingness to discuss a more modest sales tax hike on condition that Democratic legislators consider cuts to other programs and scale back a proposed transfer of transportation program reserves to the General Fund.

Neither the governor, nor legislative leaders discussed specifics of the budget talks, only general principles.

“I have said repeatedly that leading with revenue is the wrong way to do this and that I am more interested in what spending (reduction) plans are, and, quite frankly, making structural change,” Malloy said.

Aresimowicz said the governor, despite not seeking re-election in 2018, “still takes the greater good of this state very seriously in the budget talks, and that’s to his credit.”

Meanwhile, Fasano expressed concern that budget deliberations appear to be proceeding to the exclusion of Republicans.

“The time has come for our Democrat colleagues to take us up on our offer of working together to improve the state of Connecticut,” Fasano said. “Every day that goes by with inaction on the state budget someone is suffering deeply. Senate Republicans have asked numerous times to be a part of negotiations and have made it clear that we will talk about anything and everything. Instead of taking us up on these offers, Democrats have been working together to try to craft a budget without Republicans in the room.”

Aresimowicz said he would remain open to communications both with Fasano and Klarides. But he also noted that their refusal to support the concessions deal and to consider boosting the sales tax rate make it very hard to find compromise on a budget that would attract votes from both parties.