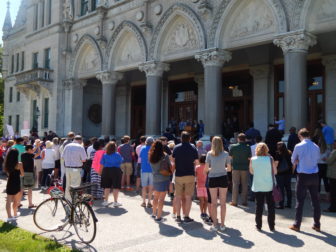 Several dozen people gather on the steps of the State Capitol Thursday in the wake of the violence in Charlottesville, Virginia.

Gov. Dannel P. Malloy denounced Republicans on Thursday for suggesting they were too focused on Connecticut’s fiscal issues to repudiate President Trump’s mixed message about the hate groups that marched in Virginia last weekend and the demonstrators who opposed them.

Malloy read his statement to reporters Thursday afternoon, hours after a hastily planned vigil at the State Capitol drew about 75 people. It was organized by a Democratic candidate for governor, Middletown Mayor Dan Drew.

The governor was reacting to Republicans who denounced the hate groups, but were muted in their reaction to the president’s willingness to equate the white supremacists and neo-Nazis with the groups that opposed them. 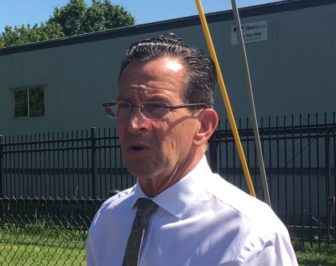 Malloy said Republicans should follow the example of Gov. Charlie Baker of Massachusetts.

J.R. Romano, the Republican state chairman, said the Democrats are trying to divert attention from the state’s fiscal troubles.

“This is nothing more than a political distraction to take away from the Democrats’ failure in the state,” he said in a text message. “And it’s sad that they’re trying to capitalize on the loss of someone’s life.”

A counter-demonstrator was killed at the protest.

“The Black Lives Matter movement works to correct decades of systemic racism and inequality toward African Americans,” Ellison said. “White supremacists and neo-Nazis wish to spread their racist and fascist belief that one race, the white race, is superior to any others. Conflating the Black Lives Matter movement with the white supremacist cause is like saying firefighters and arsonists are the same thing because they both spend so much time around fire.”

Senate GOP leader Len Fasano of North Haven issued a statement Thursday night that criticized Malloy and Drew, but said nothing about Trump.

“Once again, certain Democrat politicians are seeking to divide the state on issues that should unite us. The acts of hate, racism and bigotry in Charlottesville conflict with all that our nation stands for and the only way to combat that hate is with unity,” Fasano said. “But certain individuals running for higher office, or trying to become relevant again, are more concerned with politics than solutions. That sadly includes our lame duck governor who is doing what he does best, playing politics and dividing our state.”

Fasano said plans to write a joint op-ed about Charlottesville with a “prominent Democrat” fell through after Malloy’s statement.

“That’s how I know the governor’s statement is nothing but politics,” he said.

At the State Capitol, 11 elected officials from across the state joined Drew at the podium for an event that appeared to exclude Republicans, as well as the Democratic governor Drew is trying to succeed. Malloy said he was not invited.

“Let’s speak plainly in recognition of what this moment is,” Drew said. “This is a moment of hate led by a man of hate.”

White supremacists and counter-protesters clashed last weekend in Charlottesville, leaving one dead and dozens injured. Rep. Liz Linehan, D-Cheshire, went as far as to suggest the blame for that death should be placed on Trump.

“Like you, I am angry that we have a president who has said he will stand in the midst of Fifth Avenue and can shoot someone,” Linehan said. “But if you ask me, what happened in Charlottesville means he already did.”

The Democratic elected officials accused state and local Republicans of failing to speak out, as evidenced – they argued – by the fact that none attended the rally.

“Silence is a crime,” members of the crowd chanted.

Drew would not directly answer whether any Republican officials were invited. He confirmed at least four of the Democratic speakers other than himself were. 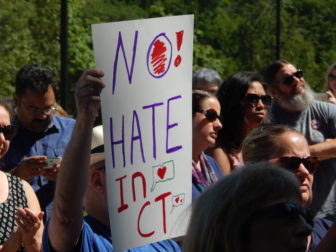 “This is a public event,” Drew said.

When pressed by reporters again on the short notice and limited publicity it received, he doubled down. “This is a public event,” he said. “It was put out to everybody.”

A number of Connecticut Republicans have criticized the president’s response, including Romano and many of the Republican gubernatorial contenders.

However, some Republicans – including Romano – were more equivocal in criticizing Trump’s statement that he saw “blame on both sides”  in Charlottesville.