Many states, like CT, have low budget reserves, income growth

Connecticut is one of just two states still lacking a budget, but it has plenty of company involving two of the key factors that complicate its fiscal challenge: the health of its rainy day fund and income growth.

And though Connecticut is not alone, it nonetheless ranks close to the bottom in both of these key categories.

“States have made strides in rebuilding their rainy day funds since the Great Recession, but most still have smaller total balances on hand than they did before the downturn,” Pew analysts wrote in an Aug. 4 report on reserves. 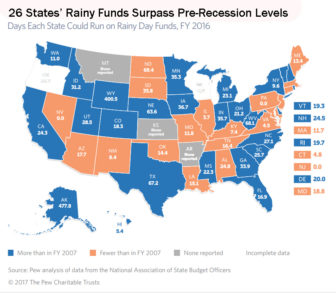 After the 2007 fiscal year, median reserves for all states represented 11.3 percent of annual operating costs, or enough to run government operations for 41.3 days.

“After tax revenue plunged in the 2007-09 downturn, states tapped both their savings and ending balances to help plug huge gaps that opened in their budgets,” Pew analysts wrote. “As state revenue has slowly recovered, so have reserves and balances.”

Over that same period, Connecticut dropped from a nearly 9 percent reserve capable of funding government for 32.7 days down to 1.3 percent or 4.8 days.

Among the 47 states that have a reserve and report data to the National Association of State Budget Officers, Connecticut ranked 42nd.

Connecticut particularly has struggled to rebuild its reserves since hitting a peak of nearly $1.4 billion by mid-2008. Gov. M. Jodi Rell and the legislature exhausted that entire reserve between 2009 and 2011.

Gov. Dannel P. Malloy and the legislature amassed a Rainy Day Fund of $519.2 million by 2014. But that reserve was criticized because the state had borrowed and refinanced an even greater sum of money during Malloy’s first term to cover operating expenses.

During the first two fiscal years of Malloy’s second term, the state finished $113 million and $170 million in deficit, respectively, which whittled the reserve down to its current level of $236 million.

“Under Governor Malloy, Connecticut has rightfully and responsibly begun to build up its rainy day fund after years of neglect,” said Chris McClure, spokesman for the governor’s budget office. “It is not as large as it should be, as is true in so many states based on the Pew study.  With sales taxes growing slowly across the nation, with states beginning to deal with their pensions in more responsible ways, and with the federal government constraining aid to states, we are faced with profound challenges as we try to build our reserves.”

That cushion might grow modestly next month. Preliminary numbers show the state finished the 2016-17 fiscal year about $35 million in the black. Comptroller Kevin P. Lembo’s office will release final numbers on the just-ended fiscal year in late September.

Connecticut also has plenty of company when it comes to personal income growth.

The growth since the start of the last recession has varied considerably state-by-state, from a low of 0.7 percent in Illinois to a petroleum price-driven high of 4.2 percent in North Dakota. 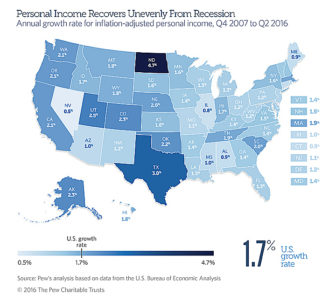 Connecticut fared somewhat better over the past year when compared with other states.

Though personal income rose just 0.5 percent here over that period, against a national growth average of 1.8 percent, Connecticut ranked 38th.

Pew analysts attributed the sluggish national trends to “lingering weakness in farming and mining” and state and local governments’ spending and taxation policies, which “cut residents’ earnings to varying degrees.”