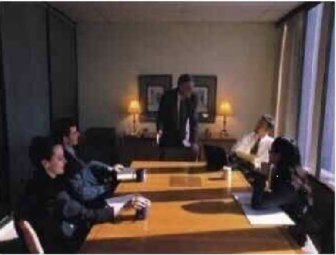 A picture of a meeting where educators and a parent discuss whether a student has been identified for special education and, if so, what services will be available.

Amid backlash from parents with disabled children, the State Board of Education seven months ago ordered a task force to probe into whether school officials are placing inappropriate barriers to getting outside evaluations of which special services children require.

But a special education attorney and an advocate on the panel say more time probably won’t resolve the problem, which is that the state department is disinclined to force districts to make getting these outside reviews easier.

“Members wanted to move forward with recommendations but we didn’t,” said John Flanders, executive director of the Connecticut Parent Advocacy Center, a federally mandated organization that helps parents with disabled children navigate the complicated special education system. “We were given to understand that moving forward with specific recommendations was not our charge” by the state department.

Andrew Feinstein, a special education attorney, also wrote the chairman of the state board before the meeting to express concern.

The task force was set up back in February after Feinstein, along with other attorneys and the parents of 71 special education students, filed a petition asking the state to amend its regulations to bar setting up barriers to outside reviews.

Parents can consult independent experts when they do not agree with school staff about what special education services their child needs. Federal law requires the local district to pick up the cost of the evaluation. Either the parents or the district can request a due process hearing if they disagree over whether an evaluation is necessary.

The outcomes of such hearings also are not publicly available, making it hard for parents and the public to understand what precedents the department has set.

Depending on the district, restrictions may include requiring that experts be certified by the state education department in a specific specialty area, mandating that experts have liability insurance, and requiring the parents of every student in a class to sign off before an expert can visit the classroom.

In February, one parent complained that her child, who was struggling with speech and reading, wanted to consult an expert from Haskins Laboratories, which is affiliated with Yale University, but was told their staff wasn’t qualified. Another parent said his district limited class visits to one a year, so he had to decide between visiting his son’s classroom or having an outside expert visit.

On Wednesday, State Education Commissioner Dianna Wentzell made clear that the department had no intention of amending state regulations on the topic. Rather, she said, the task force would help clarify existing requirements to provide districts with guidance.

“Some of the things that parents and advocates were bringing to the board, clearly there was existing regulation and law that should have helped them to get what they need for their children,” she told the state board. “One of the big ‘ahas’ in the process is that we need more than just law and regulation. We need guidance, and we need things to be in language that practitioners and families can understand.”

Guidance is great, said State Board Member Joseph J. Vrabely, but he asked if the department were prepared to act if districts don’t follow it.

“I think we will find a lot of people coming to the department saying I need help,” he said.

After the meeting, Feinstein said during an interview that informing districts of their rights won’t solve the problem entirely.

“The state needs to do something to enforce the rules,” the Mystic-based attorney said. “Parents shouldn’t have to hire me to get an independent evaluation.”