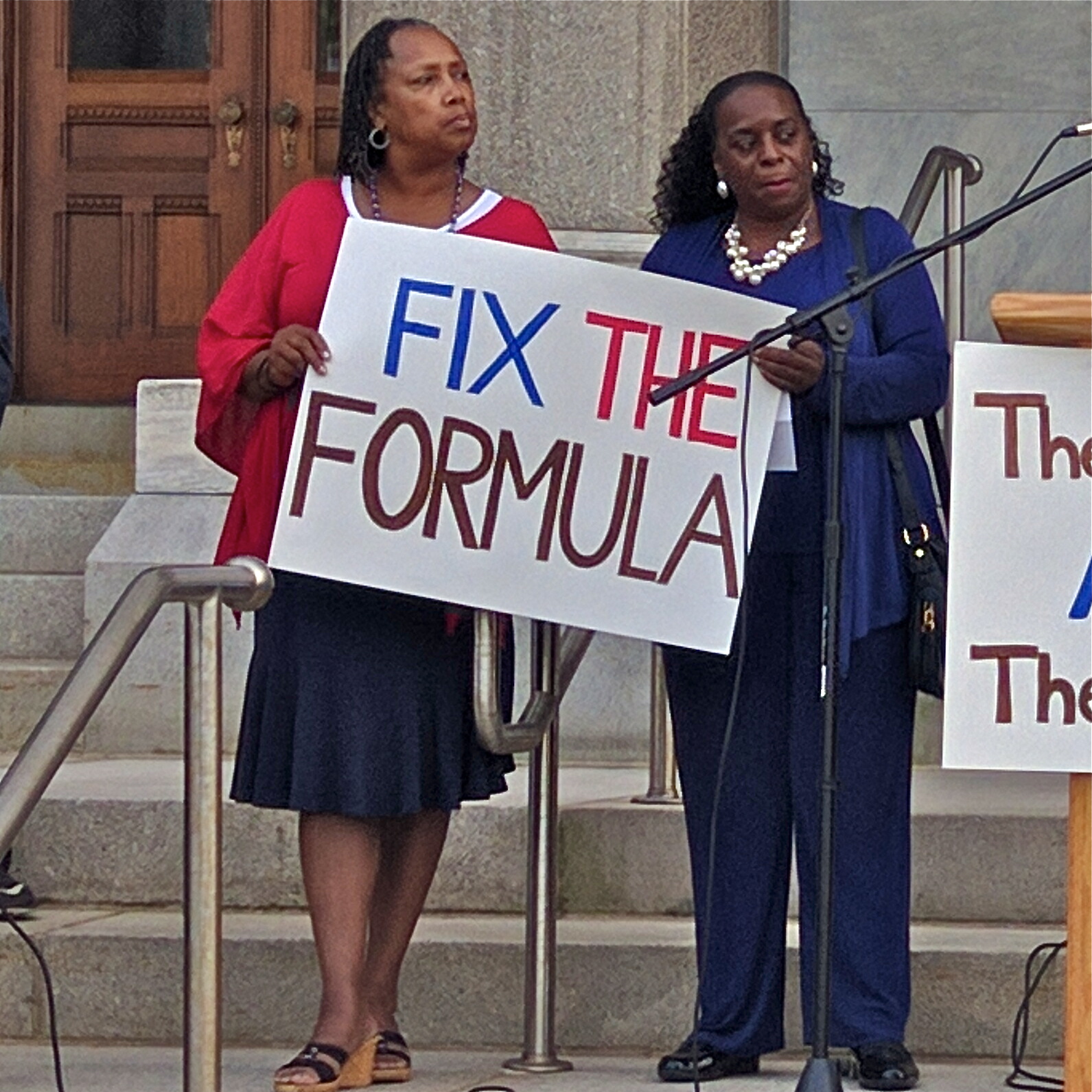 Hartford city councilwomen and parents Rjo Winch and Cynthia Jennings at the state Capitol last September calling for overhauling how schools are funded.

How the state funds public schools is so messy and complicated that dozens of parents, educators, legislators, the governor, and a Superior Court judge have characterized the setup as broken.

However, some of the criticism that regularly surfaces is based on skewed perceptions of reality.

Here, The Mirror sorts through fact and fiction.

Is there a formula for education aid?

A talking point among many state legislators and Gov. Dannel P. Malloy is that the state hasn’t been following any sort of formula for distributing the state’s primary grant to local schools, the Education Cost Sharing (ECS) grant. Instead, they say, arbitrary numbers for each town are just written into state law.

“There is no strategic approach that reflects the state’s priorities, the needs of students or what cities and towns can afford. There is no ‘formula,'” six Democratic state legislators wrote in an opinion piece published in the Hartford Courant Friday.

Budget documents, however, show the state does have a formula for divvying up the $2 billion pot of ECS school aid – though that formula is not written into state statute.

The formula, called the Education Cost Sharing formula, weighs a town’s wealth (and thus its ability to pay the cost of running its schools), how many students come from low-income families, and how much the state says it should cost to educate a typical student.

One issue is that legislators routinely manipulate how components of the formula are weighted to produce a desired outcome, either for political reasons or because of fiscal constraints.

Another issue, a review by the CT Mirror found last year, is that special funds – called earmarks – are sometimes provided for particular communities. Since state budget negotiations take place behind closed doors, the public doesn’t know how the earmarks are determined.

Frustrated by a process that seemed to undermine a formula created to ensure state aid is apportioned to cities and towns that need it most, Superior Court Judge Thomas Moukawsher ruled after a five-month trial last year that the state had created an “irrational” and thus unconstitutional method of distributing education funding that takes place in a “black box of secrecy.”

“It isn’t arbitrary or pulled out of thin air,” state Rep. Andrew Fleischmann, D-West Hartford, leader of the legislature’s Education Committee for 12 years, said shortly after Moukawsher sent shockwaves across the nation with his ruling. “Anyone who says differently is wrong.”

State Sen. Beth Bye, then the co-chair of the legislature’s budget-writing committee, said last year that more than 99 percent of the education aid distributed is run through the formula. She estimated less than less than $15 million is being spent through earmarks each year, which is a fraction of a percent of state education aid.

Read more about how schools are funded here.

Is state aid based on actual enrollment?

Malloy regularly asserts that many school districts have been spared cuts in their state education aid even though student enrollment has declined.

In proposing a new school funding formula in February, the Democratic governor promised that, “For the first time in more than a decade, this formula will count current enrollment.”

The legislature’s Office of Fiscal Analysis did plug actual enrollment numbers from the previous school year into the formula to determine state aid in the 2016-17 budget, and it was with that data that the legislature began making cuts to the ECS grant.

The governor’s criticism, however, refers to the legislature’s longstanding practice of holding school districts harmless from cuts when the formula is run with updated data, even when student enrollment has dropped or a town’s taxable property has increased. In practice, this means several Connecticut school districts in the wealthiest towns — towns that have fewer high-need students — collectively received $15.9 million more from the state last fiscal year than they would otherwise have been entitled to.

The legislatures’ adopted budget did limit how much overfunding a town could receive to 138 percent.

Has the state ever fully funded its education formula?

One of the most oft-heard complaints about state school aid is that, “The state has never fully funded ECS.” 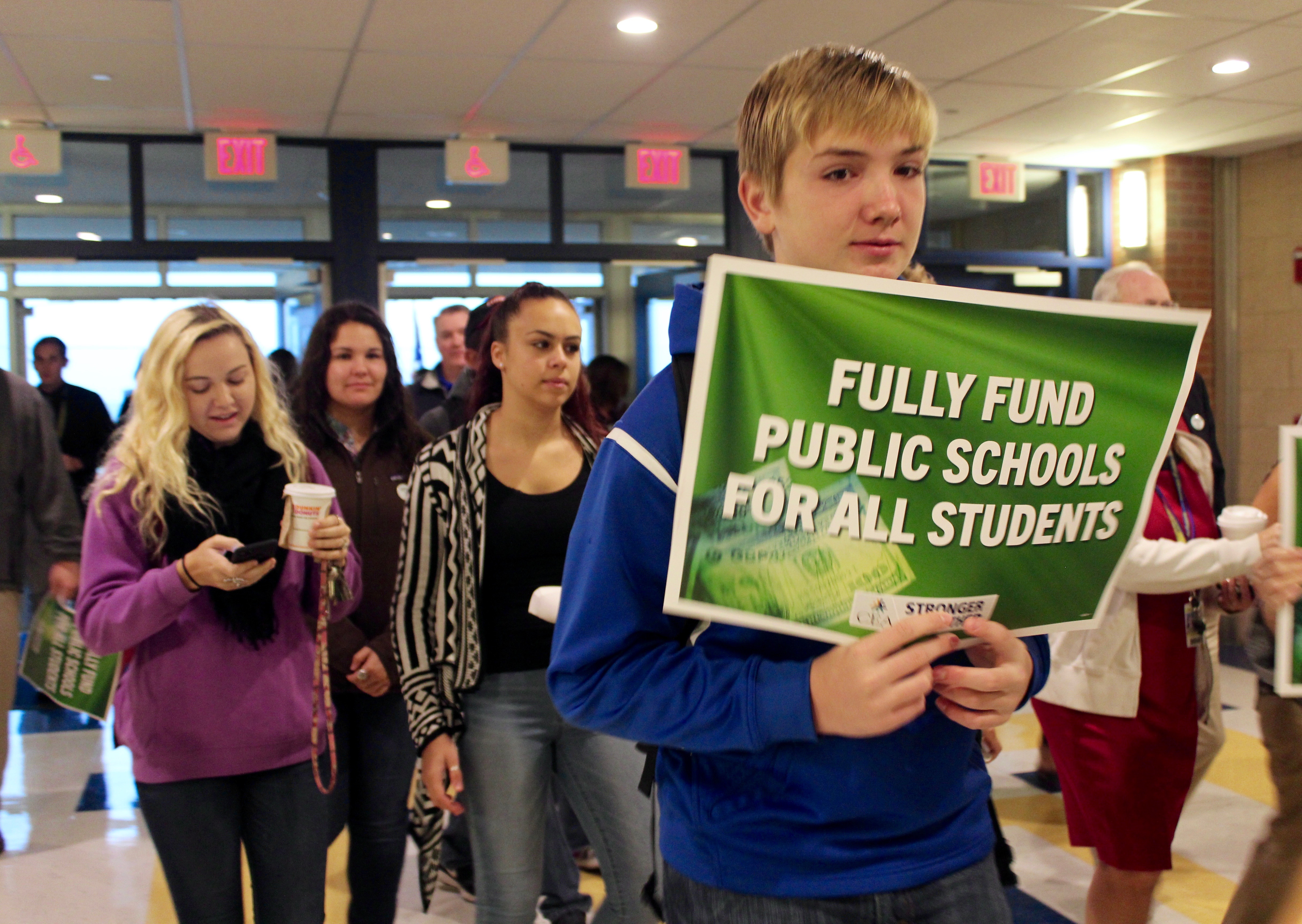 Students and teachers at Rockville High School in Vernon protest against schools being underfunded last year.

At issue here is that legislators regularly adopt budgets that promise to phase in additional education aid – and soon retreat from those pledges as state finances go into deficit.

Instead of devising a new formula to match the state’s fiscal realities, legislators implement caps and tinker with inputs to the existing one to divvy up statewide cuts based on their priorities.

If there had been no caps for the fiscal year that ended June 30, the formula would have called for $2.58 billion in state ECS spending. The state ended up spending $549 million less than that.

The legislature’s non-partisan fiscal office reports the formula was most recently fully funded in the 2006-07 fiscal year. Over the last 20 years, the formula has been fully funded twice. However, in more recent years the gap between what the formula calls for and what has been provided has grown along with the state’s fiscal difficulties.

Does the state forbid school districts to cut their budgets?

At a press conference outside the state House of Representatives chamber two weeks ago, several municipal leaders came to the microphone not only to express their outrage that the state hadn’t adopted a budget yet, but also to say that the state should allow them to begin cutting their education budgets.

It’s not a new complaint.

However, while one section of state law does require municipalities to spend at least as much on their schools as they did the previous year, other sections of state law spell out exemptions to that rule.

Spending requirements do not apply to the state’s highest performing districts, for instance. Other towns also can cut spending by 1.5 to 3 percent from year-to-year if enrollment declines or a school closes or a district can document savings. And when the state cuts funding for education, districts can cut their education budgets by the same amount.

For all the rhetoric, only two districts have asked for permission to cut spending in recent years, Kathy Demsey, the state education department’s chief financial officer, said earlier this year.

“Despite what people said, districts and communities were not banging down the doors asking for a waiver. That’s the interesting thing. Because they made it sound like we just kept denying it, and the truth is we had almost no formal asks,” Demsey said.

And spending hasn’t been flat, either. State data shows that spending on education is increasing much faster than inflation.

Will some towns get nothing in the new budget?

The fact that the governor would provide no funding to some affluent towns in his proposed overhaul of the Education Cost Sharing grant has provoked criticism, primarily from legislators who represent those towns.

But while the ECS grant is the largest school grant the state provides, it only makes up about 42 percent of state spending on education. The state also spends more than $1 billion funding pensions for retired municipal teachers and $675 million paying off debt incurred to help municipalities build or renovate schools. And then there are grants for other initiatives.

For example, Greenwich, the state’s wealthiest community, received $1.1 million in other smaller grants in fiscal 2016 to help pay for things like special education and school meals. The state paid $22.8 million for the pensions of the town’s retired teachers.

See below for details of the non-ECS aid each town receives.

CT Freedom Alliance has until next week to find new experts for a case the state is moving to dismiss.