Democrats get creative in setting up budget choices 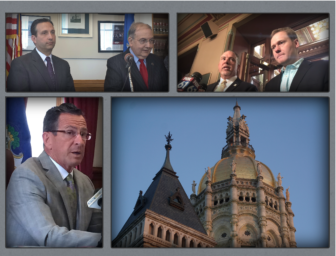 As Democratic legislative leaders scrambled Thursday morning to get a new state budget ready for a vote later in the day, they readied an unusual procedural maneuver to underline the stark choice of passing a compromise spending plan or ceding authority to the governor.

The proposed budget comes with an unpalatable mix of tax hikes, spending cuts and other unpopular measures. But the option is allowing Gov. Dannel P. Malloy to continue running the state by executive order, forcing draconian reductions to municipal aid and social services.

To highlight the choice, Democratic leaders essentially are making the terms of Malloy’s executive order the underlying budget bill. The compromise budget would be offered as a “strike-all” amendment, a tactic that serves a purpose now and in the legislative races of 2018.

The ploy is designed to set up a binary choice, one that Republicans say is false and “absurd.”

It is an effort by the Democrats, who barely control the agenda of the closely divided General Assembly, to characterize a vote against the compromise budget as a willingness to accept the far worse alternative of budgeting by executive order.

Democratic leaders hinted at this course Wednesday, saying that the 11-week budget impasse has gone on too long. The compromise plan they were developing with Malloy, they added, was the only alternative to painful spending reductions just a few weeks from now.

“The Republican budget will never be signed by the governor — ever,” House Majority Leader Matt Ritter, D-Hartford said.

“If we don’t do anything other than pass a budget that will get the signature of the governor, that [executive order] is the budget and we live with those consequences,” Senate President Pro Tem Martin M. Looney, D-New Haven, said, adding he personally is convinced Malloy “is prepared to govern indefinitely by executive order if we don’t get the budget done.”

Since the fiscal year began on July 1 without a budget, Malloy has said he has no legal alternative but to reduce spending on municipal aid and social services, since most other expenses are fixed either by contract — such as debt service — or by federal entitlement rules, such as Medicaid programs for the poor.

But Pat O’Neill, spokesman for the House Republicans, called the Democratic maneuver “ridiculous” and “absurd.”

“They are trying to create this fantasy that there are only two options: that it’s either the Democratic budget or the governor’s Draconian executive order, and that’s simply not the case.”

O’Neill added that, “We have a Republican budget that is out there, that is fully vetted and balanced, and that doesn’t raise taxes.”

“This just absolutely underscores their lack of confidence in their own budget,” said Senate Republican leader Len Fasano of North Haven. “They are saying they have to put up this really bad executive order that nobody likes or vote for our budget, which stinks a little less.”

Though Malloy and Democratic leaders still were struggling Thursday morning to reach agreement on some policy language to be included in the new budget bill, they had settled on a framework of taxes and spending to cover this fiscal year and next.

Republicans largely object to the tax hikes in the new plan, which sources say will include:

The deal also would require cities and towns to begin paying a portion of the annual contribution to the teachers’ pension fund, which Republicans’ oppose and which led municipal advocates to endorse the GOP budget on Wednesday.

Democrats have several problems with the Republican plan.

Republicans want to save $270 million in the new budget by scaling back employee pension benefits after 2027 — when the current benefits contract expires. Republicans say these changes reduce required contributions into the pension fund starting right away. Democrats counter these changes can be done only through collective bargaining, a legal position Republicans say is incorrect.

Some Democrats also object to the Republican budget because it reduces income tax credits for the working poor more than the Democratic plan does.