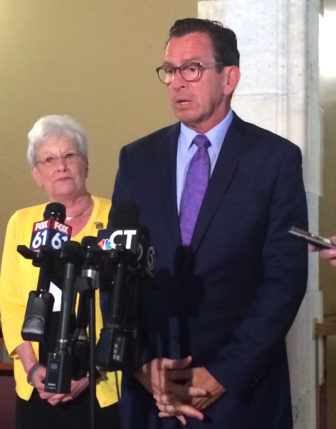 While time is dwindling for the state and its hospital industry to strike a deal on a new taxing arrangement that could help solve Connecticut’s budget crisis, Gov. Dannel P. Malloy said Tuesday the state might be able to stretch Friday’s deadline for about two more weeks.

It remained unclear whether the legislature and the governor would adopt the hospital tax changes separately in the event a complete budget deal remains unresolved by mid-October.

The Democratic governor, who met for 90 minutes Tuesday behind closed doors with legislative leaders, also said he remains determined to veto a GOP-crafted budget for this fiscal year and next that passed with support from eight Democratic representatives and senators earlier this month.

At issue is a complicated deal Malloy negotiated earlier this month with the Connecticut Hospital Association to raise the annual tax on the industry from $556 million to $900 million.

That’s part of a larger plan that calls for the state to redistribute and return that entire $344 million annual increase back to the hospitals this fiscal year — along with another $326 million in other payments.

This, in turn, would qualify Connecticut for an additional $365.5 million in federal Medicaid reimbursement.

But some of the state payments to hospitals involve rate increases that still require approval from the U.S. Centers for Medicare and Medicaid Services, commonly known as CMS.

Those rate hikes are supposed to be filed before Sept. 30, the last day of the federal fiscal year. Malloy said Tuesday that Connecticut probably could stretch that deadline — but not by much.

“To be effective it should be done by Friday evening,” the governor said. But he added that his budget office has been in communication with CMS and “that date is important but certainly not as critical as was once thought.”

Connecticut could begin to pursue CMS approval now and file amendments to its request with tax arrangement details later “provided we had a budget in a very short — one-week, two-weeks after that — period of time.”

The governor cautioned lawmakers not to try to stretch the process, though, beyond Oct. 15.

The hospital association renewed its endorsement Tuesday of the arrangement it negotiated with the governor, involving the tax increase and the additional state payments back to the industry.

“We strongly urge legislators to act quickly to move forward and vote on the hospital agreement to maximize federal funds to benefit patients, hospitals, and the state,” Jennifer Jackson, CEO of the association, said.

Many legislators from both parties have said they only agreed to another tax hike on hospitals because it had earned the CHA’s endorsement. And the industry said it only had done so because this new plan effectively cuts the burden placed on Connecticut’s hospitals in half.

Malloy has said he will veto the GOP-crafted plan, which was expected to arrive on his desk late Tuesday or early Wednesday.

The governor also said that this new hospital tax arrangement, if adopted, also needs to include a provision settling the hospital industry’s pending lawsuit against the state regarding the provider tax.

That levy has been a source of friction between the two sides since 2012 — one year after the tax was enacted — when the state began reducing supplemental payments back to hospitals.

“It would be in the state’s best interests and, quite frankly, the hospitals’ best interests, particularly on the attorney-cost side, to reach a comprehensive agreement,” Malloy said.

Democratic and Republican legislative leaders said they would meet again Wednesday with the governor, but they were noncommittal about whether the legislature would attempt to pass a new hospital tax arrangement separate from a state budget.

“There’s negotiations still going on and so far, as of this moment, there hasn’t been a definitive answer,” House Minority Leader Themis Klarides, R-Derby, said.

The state has gone more than 12 weeks without a new budget since the fiscal year began on July 1.