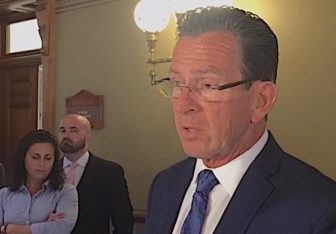 The struggle to adopt a new state budget hit another stumbling block Wednesday centered on a hospital industry lawsuit.

At issue is a new taxing arrangement that the administration and the Connecticut Hospital Association negotiated that would help both sides by leveraging $365 million in new federal aid for them to share.

But Gov. Dannel P. Malloy says he doesn’t want that deal included in the next state budget unless the CHA also agrees to settle the lawsuit it filed in 2015 contesting the provider tax.

The association says the two issues are not linked.

“Accessing hundreds of millions of dollars per year in (federal) funds and not settling the overall disagreement would be malpractice,” the governor said. “And I don’t intend to do that.”

But if the governor can’t reach agreement with the hospital industry, that severely complicates the challenge of balancing the next two-year state budget. Connecticut already has gone 12 weeks into the new fiscal year without an adopted budget.

All Republican legislators and some Democrats have said they won’t support this arrangement — which would provide state government with an extra $137 million per year — unless it is endorsed by the hospital industry.

Legislative leaders said they’ve agreed to wait and see if the administration and CHA can resolve this soon.

“There’s negotiations still going on and so far, as of this moment, there hasn’t been a definitive answer,” House Minority Leader Themis Klarides, R-Derby, said.

But the clock is ticking.

This arrangement also needs approval from the U.S. Centers for Medicare and Medicaid Services, and the Malloy administration says Connecticut’s application must be completed by mid-October.

There’s a lot of money at stake.

The plan calls for Connecticut’s annual tax on hospitals to rise from $556 million to $900 million.

The state would redistribute and return that entire $344 million increase to the industry, along with along with another $326 million in other payments.

But Connecticut also would come out ahead, because these payments to hospitals would trigger $365.5 million in new federal Medicaid reimbursement to the state.

The tax has been a source of friction between the state and its hospitals since 2012 — one year after the tax was enacted — when the state began reducing supplemental payments back to hospitals.

“If the administration is now making settlement of the litigation a requirement of the agreement finalized two weeks ago, then that is a change to the context in which the agreement was reached. We strongly urge legislators to act quickly to move forward and vote on the hospital agreement to maximize federal funds to benefit patients, hospitals, and the state.”

But if there’s a new tax arrangement in which both sides would benefit tremendously, Malloy said, then the lawsuit must be resolved as well.

“No one should assume that I’m going to do things that wouldn’t be comprehensive in nature,” the governor said.