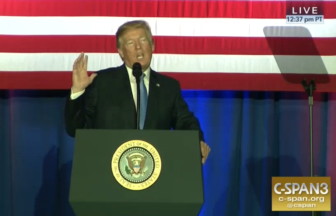 President Donald Trump introduces his tax plan at a speech in Indianapolis.

Washington – President Donald Trump’s tax plan, which he unveiled in Indiana Wednesday, would aid affluent individuals in Connecticut and lower the corporate income tax rate paid by many businesses in the state.

Trump’s plan would eliminate the estate tax, a federal levy on inheritances valued at more than $5.34 million. By percentage of the population, more federal filers in Connecticut paid this tax than in almost any other state.

The Internal Revenue Service said that the top five filers of estate tax returns in 2015 — per capita — were South Dakota, the District of Columbia, Florida, Connecticut and North Dakota.

In announcing his plan at the Indiana state fair, Trump said it is “a once-in-a-generation opportunity” to overhaul a complicated and unfair tax code.

“This is a revolutionary change, and the biggest winners will be middle-class workers as jobs start pouring into our country, as companies start competing for American labor, and as wages continue to grow,” Trump told a crowd of supporters.

But the plan’s impact on middle- and lower-income tax filers is unclear. It is not much more than an outline, and without certain details, which will be left up to Congress to provide, it is difficult to say whether the tax overhaul will benefit most Americans or favor the wealthiest.

Trump’s tax plan, negotiated with GOP leaders in Congress, would collapse individual tax brackets from seven to three, with tax rates of 12 percent, 25 percent and 35 percent. Currently the top rate is 39.6 percent and the lowest rate is 10 percent.

That means the nation’s poorest tax filers would have a rate increase, and its richest filers a rate decrease. The framework said there would be other benefits to offset the tax hike on the poor, however, and the framework gives Congress the option of creating a fourth rate above 35 percent, but does not say what income levels would be associated with the higher rate.

“Typical families in the existing 10 percent bracket are expected to be better off under the framework due to the larger standard deduction, larger child tax credit and additional tax relief that will be included during the (congressional) committee process,” it said.

Currently, the Child Tax Credit, which would be raised under the Trump plan by an unspecified amount, is worth as much as $1,000 per child, depending on family income.

But the Trump plan eliminates the personal exemption for dependents, which helps large families. Instead, there would be a new tax $500 tax credit for elderly dependents.

The tax plan also leaves out a number of deductions often used by middle-income Americans, committing to keep only the mortgage interest deduction and the deduction for charitable contributions.

That means the medical deduction, which helps the aged and many who suffer a major illness, and the student loan interest deduction that was used by 152,000 Connecticut filers in 2014, would be eliminated. So would deductions relating to certain moving and professional expenses.

The elimination of the deduction for property taxes and state and local income taxes would especially hurt Connecticut taxpayers. Because of the expensive housing market in many parts of the state, Connecticut residents pay higher property taxes than many Americans, and the ability to deduct that expense when filing federal taxes helps many.

In addition, the elimination of federal deductions for state and local taxes would disproportionately hurt states with high taxes and high incomes — like Connecticut.

In place of these deductions, the tax plan would double the standard deduction to $24,000 for married couples and $12,000 for individuals. 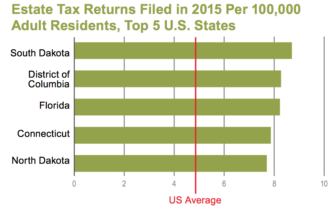 The framework does not say how to pay for a plan that could add trillions of dollars to the federal deficit.

Sullivan also said the end of the deductions for property tax and state and local taxes would hit Connecticut residents hard.

“It has always been a powerful adjustment to taxable income, mostly to the middle class,” Sullivan said. “For middle-income taxpayers, loss of state and local tax deductibility is unlikely to be offset by either the standard deduction or other changes.”

He also said the elimination of the federal estate tax would “put pressure” on Connecticut to repeal it’s state estate tax.

Trump’s plan would lower the corporate rate from 35 to 20 percent. It also would change the tax rules for “pass-through” businesses, which are partnerships and sole proprietorship’s that now are taxed at the personal income tax rate of their owners. The new pass-through rate would be 25 percent.

There are about 275,000 pass-through businesses in Connecticut.

Sullivan said the reduction of the corporate tax rate and the rate paid by “pass-through” businesses would be a boon to job creation in Connecticut.

“I think that it could serve as a stimulus to the state’s economy,” Sullivan said.

The tax plan also would eliminate the Alternative Minimum Tax that nearly 100,000 Connecticut filers paid in 2014. The AMT was designed to prevent wealthy people from avoiding federal tax entirely through deductions and credits.

GOP leaders say they want to pass the tax overhaul by the end of the year, but that could be tough.

A comprehensive tax overhaul has eluded Congress for decades. The last one was passed in 1986.

The tax plan was created without Democratic input, and Democrats, including Reps. Elizabeth Esty, D-5th District, and Jim Himes, D-4th District, called for key congressional committees to allow them to help shape a final plan.

Esty also called the plan a giveaway to the wealthy at the expense of everyone else.

“The proposal put out today would provide tax cuts for the wealthy at the expense of middle-class, working Americans,” she said. “Not only that, it is fiscally irresponsible. This plan would contribute at least $3 trillion over the next ten years to the federal budget deficit, while gutting Medicare, Medicaid and Social Security— programs that are vital to lifting folks out of poverty.”