No budget progress amid a day of political theater 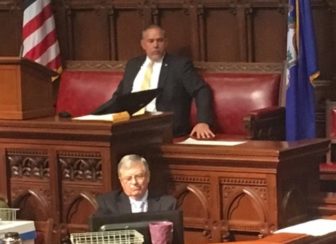 House Speaker Joe Aresimowicz sat down after no one would make a motion to open a veto override debate.

Connecticut’s budget drama continued Tuesday with two plot twists: the failure of the House to override the veto of a Republican-authored budget, followed by a Democratic challenge for the GOP to accept a legally suspect measure to temporarily stabilize public services while continuing negotiations.

The first was preordained, the second unexpected. Neither substantially advanced the slowly unfolding story of a state in fiscal chaos, where a Democratic lame-duck governor and a closely divided General Assembly have failed to agree on a budget for a fiscal year that opened July 1 and is now one-quarter gone.

After a brief meeting with legislative leaders at day’s end, Gov. Dannel P. Malloy told reporters the search for middle ground on the budget would continue. He said,  “I think everyone in the room realizes that we need to get a budget and we need to get it sooner rather than later.”

The governor added there is a recognition that the chances of getting any new budget enacted this month grow slim after Oct. 13 because of legislative scheduling challenges.

A GOP minority budget unexpectedly passed last month with the support of five Democrats in the House and three in the Senate. To override Malloy’s veto in the House, 29 of the 79 Democrats would have to join the 72 Republicans to produce the necessary two-thirds majority of 101 votes.

House Speaker Joe Aresimowicz, D-Berlin, called the session confident that Malloy’s veto would be upheld and the budget debate would shift away from the GOP plan. House Minority Leader Themis Klarides, R-Derby, informed him by text message before the sessions that no member of her caucus would make the motion necessary to even open the debate.

Aresimowicz nonetheless convened the House, asking if anyone who had voted for the budget would make a motion to reconsider the bill. When no one answered, Aresimowicz pointedly sat down, leaving the House in an awkward silence. 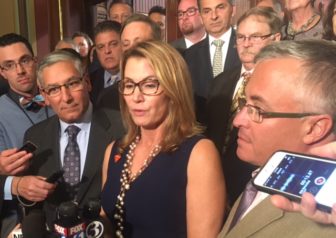 “Let’s be clear about what just happened today,” Aresimowicz told reporters after the session “Given the opportunity to discuss, defend and vote for a veto override on their budget, the Republican Party decided to take a pass.”

Klarides replied that Aresimowicz had quickly scheduled a veto session to ensure that support would not build for an override as the public realized that, in the absence of a budget, the governor would slash aid to municipalities by executive order.

“It’s disappointing to me that this happened so quickly,” Klarides said, “and the reason is this: We absolutely, positively stand behind the fact that overriding this veto is the best for the state of Connecticut.”

House Majority Leader Matt Ritter, D-Hartford, made a surprise offer to the Republicans, asking them to consider a stopgap measure built around $850 million of new revenue common to the Republican budget and a Democratic version.

Ritter said his offer was a temporary fix, but one that could delay draconian cuts to local aid and other programs while budget talks continue.

“I hope you will join me,” Ritter told his colleagues on the House floor. “We will avoid the executive order.”

Ritter had no proposal ready for a vote, and his idea to essentially pass a partial budget could be legally problematic, because of the balanced budget requirements in the state Constitution.

While Jepsen raised concerns about the governor’s plans to reduce special education and sales tax revenue-sharing grants, he offered Malloy and the legislature just one alternative — write a new state budget.

The opinion was requested by Senate Republican leader Len Fasano of North Haven.