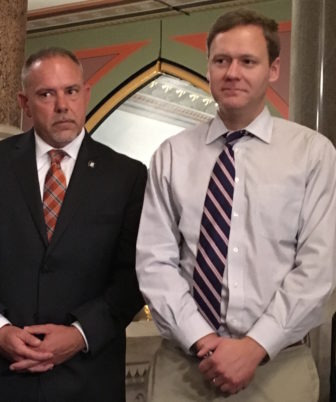 “We’re in that room until we’re not in the room,” said House Minority Leader Themis Klarides, R-Derby, who quickly added, “We have hope or we wouldn’t be in the room. … We’ve agreed on a number of things but there’s still very serious issues we have to work out.”

House Speaker Joe Aresimowicz, D-Berlin, had said Tuesday that, “I really can’t see a way where we don’t come to an agreement,” adding he expected leaders could bring that deal to Gov. Dannel P. Malloy in a day or two.

But 24 hours later the speaker emphasized the time that’s required to reach the many hard decisions with which lawmakers were grappling.

“Getting there is tough, but we’re taking a step forward each and every day,” he said.

Did he still expect bipartisan talks would yield an agreement?

“Yeah, but I’m forever the optimist,” he added.

After pushing competing budget plans for much of the summer, legislative leaders renewed bipartisan talks last week with a new twist — not including Malloy’s budget staff in the negotiations.

A budget crafted by Malloy and Democratic leaders failed to clear the legislature in mid-September while a GOP plan narrowly won approval after drawing votes from eight Democrats.

But the governor vetoed that plan argued it was plagued by hundreds of millions of dollars in gimmicks — a claim GOP leaders dispute — deep cuts to  higher education and insufficient funding for the financially distressed city of Hartford.

The administration has been wary, though, that the latest push to achieve bipartisan consensus will produce a deal that restores some of the same budget initiatives that led Malloy to veto the GOP-crafted plan.

These include proposals to reduce state payments into pension funds and to direct Malloy to achieve massive savings after the next budget is in force. All remain under consideration.

The governor warned legislators Wednesday he would not hesitate to veto any budget he considers to be fiscally flawed — regardless of whether it has enough bipartisan backing to override that veto.

But it still was unclear when legislative leaders left the Capitol late Wednesday whether a bipartisan deal would be struck any time soon. 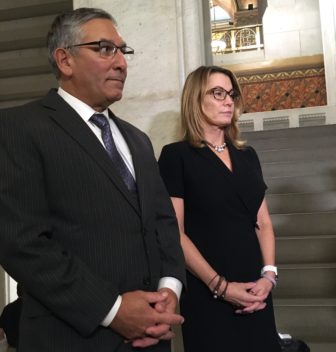 And Senate President Pro Tem Martin M. Looney, D-New Haven, said while there has progress on municipal mandate relief and incentives for towns to regionalize services, “Some of that has been pinned down. Some of it is still somewhat conceptual.”

Senate Republican leader Len Fasano of North Haven focused his comments not on whether an agreement would be reached, but simply the fact that both sides have compromised and negotiated in recent days in a cooperative fashion not seen in years.

“Whatever else happens, I think that’s extraordinarily healthy for the state of Connecticut,” he said.

When pressed to estimate when a budget compromise might be struck, Klarides declined.