Malloy warns he would veto a budget that defers pension contributions 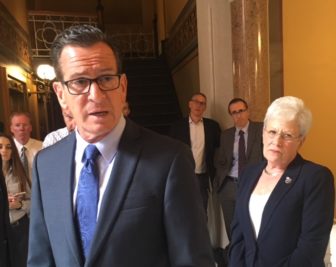 Gov. Dannel P. Malloy warned legislators Wednesday that he would veto any state budget — even one enacted with bipartisan support — if it is riddled with the same gimmicks he rejected two weeks ago.

“I think that people would be making a mistake if they totally ignored my veto message,” Malloy told reporters. “But on the other hand, a veto can be overridden, and I’m well aware of that. But I can assure you that threat won’t cause me to change my values or the like.”

Malloy also expressed doubt that legislative leaders were close to a bipartisan deal, even though House Speaker Joe Aresimowicz, D-Berlin, expressed optimism Tuesday at a news conference with Republican and Senate Democratic leaders. The governor smiled and said the body language didn’t signal agreement to him.

Aresimowicz indicated that any bipartisan deal probably would include several Republican proposals that the governor and his fellow Democrats in the legislature decried just a few weeks ago.

Malloy’s refusal to accept what he calls pension gimmicks potentially opens a huge gap in the budget. House Minority Leader Themis Klarides, R-Derby, said Tuesday her caucus members would not agree to more revenue to close that gap.

The governor declined to say if that was an insurmountable obstacle to a bipartisan budget. Instead, he said, he will review proposals as they are made.

Malloy said it was positive that the bipartisan talks were continuing.

But, he added, “It’s about getting a budget done that is fair and balanced and free of gimmicks and doesn’t rely on the legislature kicking the can to the governor to make hard choices which they then question.”

The GOP-crafted budget vetoed by Malloy would have scaled back state employee pensions after the current benefits contract expires in mid-2027, but taken some of the savings now, reducing the actuarially required state contributions in the upcoming biennium by $321 million. Malloy says the move might not survive an inevitable court challenge by labor unions.

Similarly, a proposal to supplant $95 million in contributions the state owes to the teachers’ pension fund with increased contributions from teachers is risky as well.

Teachers can be required to contribute more. But the state’s ability to reduce its own payments are limited, the administration says, by contractual pledges the state made to its bond investors when it borrowed $2 billion in 2008 to shore up the teacher pension fund.

And while Malloy noted that all state budgets require the administration to find savings that “lapse” back into the General Fund, the $1.84 billion in savings he has recommended already is a very aggressive target.

“Quite frankly we probably went beyond where we should go in that,” he said. The Republican plan called for $260 million more in savings to be found by merging agencies and reducing executive appointments.

But the latter doesn’t involve close to that level of spending and the governor’s authority to impose layoffs is greatly limited over the next four fiscal years by a deal that brought new union concessions.

Malloy added that he anticipated submitting another budget proposal to the legislature in the near future, adding it would focus on alternative cost-cutting ideas.