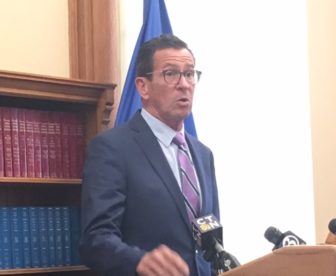 Gov. Dannel P. Malloy has repeatedly attacked a linchpin of the Republican budget plan on legal grounds, arguing that unilaterally trimming pension benefits in 2027 to save millions now is doomed to failure in court. On Tuesday, he said the GOP’s math doesn’t work, either.

The release of an actuarial analysis at a hastily called press conference is an attempt to land what the administration hopes is a final and fatal blow on the GOP’s claim the state can save more than $300 million over the next two fiscal years by mandating pension changes after the current collective bargaining agreement expires in 10 years.

“We already knew that the illegal pension scheme proposed in the Republican budget would lead to a lengthy legal battle and eventually cost Connecticut taxpayers billions of dollars,” Malloy said. “We also know that even a more modest prospective change for employees who are still unvested in 2027 would offer almost no savings at all to the state in the current biennium.”

At issue is a GOP proposal to cut required pension contributions by $144 million this fiscal year and $177 million in 2018-19 by trimming benefits for all workers starting July 1, 2027 — after the state’s benefits contract with employee unions has expired.

The governor and the unions have said the state cannot unilaterally reduce benefits — even in mid-2027 — that were earned and vested prior to that time. Most state employees are vested for full pension and other retirement benefits after 10 years of service.

But some legislators have suggested instead trimming benefits in 2027 only for workers not yet vested, an option deemed less risky from a legal standpoint.

Malloy neither embraced nor ruled out such an approach, saying he would have to review any proposal the legislature offered. Trimming benefits for workers not yet vested would be putting down a political marker for some lawmakers: a statement the state is committing to setting retirement benefits by law, not bargaining.

But this approach yields no savings close to that in the GOP plan.

The state’s pension actuaries, Cavanaugh Macdonald Consultants, said this approach saves nothing for the next two years and just $2.2 million in 2020. The annual savings wouldn’t exceed $10 million until 2031.

The same actuaries also calculated the savings projections for the Republican budget proposal. But they do not provide opinions on what pension changes are allowed under law.

House Minority Leader Themis Klarides, R-Derby, said it is clear the governor wants to undermine bipartisan legislative budget negotiations that for the past two weeks have excluded his administration.

“Now, in an attempt to inject himself into our negotiations, he is trying to dispute the initial findings which show that hundreds of millions can be saved by making long-term structural changes in the state employee pension plan beginning in 2027,’’ she said.

“The governor has a very favorable view toward the union contracts, probably because they’ve been his supporters,” Fasano said.

The Senate Republican leader added that “vesting is not an absolute” and that restricting pension adjustments tied to overtime earnings and cost-of-living formulas is within the state’s authority.

Why are the projected savings so light if changes only are applied to workers who — in mid-2027 — have less than 10 years of experience?

The administration says that’s primarily due to the new concessions deal Malloy reached earlier this year with state employee unions.

That agreement, ratified last summer, already places many new restrictions on the pension benefits that new state employees can earn. The potential for big savings only comes if the state can peel back benefits for workers hired under previous benefits contracts.