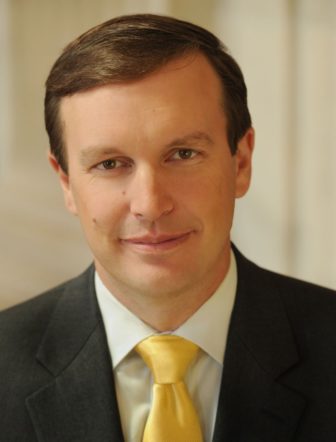 Washington – Back from a quick trip to the nation, Sen. Chris Murphy on Monday said officials in Estonia are concerned the Trump administration has “downgraded” the nation by naming an acquaintance of former White House adviser Steve Bannon to replace its current U.S. ambassador.

President Donald Trump has nominated Edward “Sonny” Masso to succeed James Melville Jr., a career foreign service officer whose service in the Estonian capital of Tallinn began in August of 2015.

Masso, who is of Estonian heritage, befriended Bannon while both men served in the Navy.

“Estonia feared it was downgraded,” said Murphy, who also visited Ukraine over the weekend.

The trip was sponsored by the Senate Foreign Relations Committee, a panel Murphy belongs to.

Murphy said Estonian and other European officials “are deeply worried about the increasing incoherence of U.S. foreign policy,” especially Trump’s move to decertify Iran’s compliance with a nuclear agreement and seek changes to the deal and the president’s criticisms of NATO.

“The Russians are still playing games across the Baltic,” he said.

But Murphy praised Trump’s appointment of Kurt Volker as a special envoy to Ukraine. Volker has assured the Ukrainians the United States will not broker a separate deal with Moscow that would leave Ukrainians out in the cold.

“(His appointment) signals that the president won’t abandon them,” Murphy said.

Murphy, who has visited Ukraine four times since his election to the Senate in 2012, said he was asked a lot of questions about U.S. progress in the investigation of Russian interference in American elections.

The senator said he supported U.S. military aid to the region. But as a member of the Senate Appropriations Committee, Murphy said he will seek additional funds to fight corruption, even if those funds are shifted from military accounts.

“When we spend money on corruption programs, it works,” Murphy said.

Murphy traveled to Ukraine and Estonia on his own after Sen. Ron Johnson, R-Wis., was forced to cancel the trip because of a scheduling conflict.