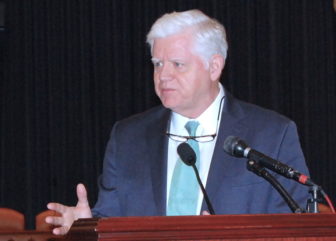 Washington – As a member of the House Ways and Means Committee, 1st District Rep. John Larson is on the front lines of Democratic opposition to the Republican plan to overhaul the federal tax code.

This week, the Ways and Means panel is considering a 429-page tax bill that would dramatically change the way Americans file their taxes, lowering rates on individuals and corporations, but also eliminating the personal exemption and popular deductions.

The GOP hopes to vote the bill out of the House Ways and Means Committee on Thursday, and to vote on the bill on the House and Senate floors before Thanksgiving.

Larson says the way Republicans are handling the tax code overhaul, within a tight time frame and without input from Democrats or public hearings, is reminiscent of the way they tried to repeal and replace the Affordable Care Act.

And just as that effort died in the Senate, Larson predicts the same fate for the tax bill.

But horse trading on the bill has not begun in earnest and changes may be made.

The GOP is selling the tax overhaul as a boon to middle-class America, but the changes will result in winners and losers, including some middle-class families.

Many of the losers may be concentrated in high-income states like Connecticut because they will no longer be able to deduct state and local income taxes and the deduction for property taxes would be capped at $10,000.

But the plan may help others who don’t normally itemize by almost doubling the standard deduction to $12,000 for individual filers and $24,000 for joint filers.

The tax plan also would cut the top corporate rate, from 35 to 20 percent, and would allow multinational corporations to repatriate overseas earnings at a much lower rate, 10 percent.

It also would add nearly $1.5 trillion to the deficit over 10 years.

For Larson and most congressional Democrats, the bad outweighs the good. “I don’t know how they look at themselves in the mirror,” he said.

Before the markup on the bill, Larson talked to the Mirror about his view of its prospects and impact on Connecticut.

We haven’t been able to participate. You may recall that in ’86 when Ronald Reagan and Tip O’Neil sat down (to write a tax bill) there were 466 witnesses brought in, there were 26 days for the markup to take place, and there were 30 public hearings in the main committee and there were 12 separate subcommittee hearings. There have been no hearings with respect to this bill…Even (the GOP’s) own members don’t know the extent of what’s in this bill.

So, from a process standpoint, when this impacts 100 percent of the nation’s economy, with changes that undoubtedly will have winners and losers, there’s been no public hearings or public testimony. They are just going to attempt to jam this bill through politically, so they can say just as they did in health care that they ‘checked the box’….I don’t know how they look at themselves in the mirror.

You say people will get hurt…

In the initial look at this, states like Connecticut get hurt extremely and why? Because there is no substantive back and forth. We’re just losing the state and local income tax deduction…Connecticut which ranks No. 2 in the nation as far as the impact of this provision on them, it’s going to hurt us.

But isn’t simplifying the tax code a good thing?

Will all Democrats oppose the proposal that was rolled out last week?

There’s no question about that.

Democrats aren’t against a tax code overhaul, are they?

I can’t say it better than (Republican) Representatives Lee Zeldin and Peter King of New York, who said, ‘This is the largest shift, regionally, of money regionally from one sector of the country to another.’  So it’s on the backs of people from Connecticut, New York, New Jersey, Massachusetts, Maryland, Pennsylavania to pick up a tab for a tax for major corporations and individuals in the Midwest and other places who may benefit from this…

If the tax breaks were distributed evenly, would Democrats approve lowering the corporate tax rate from 35 percent?

Remember President Obama was for a 28 percent tax rate and 25 for manufacturers. We’re like President Kennedy in that we do believe that growth can assist in great aid and help to the economy. But it has to be balanced. This isn’t remotely balanced…and for the Northeast…this shifts the burden to the middle class and professionals. It doesn’t ease their lot in life. What it does is add more of a burden to it.

Do you think the plan could hurt others?

No question about it. My daughter is a school teacher, and from time to time reaches into her own pocket to buy supplies for disadvantaged kids in the classroom. That was such a disaster, according to the Republicans that they had to repeal that cap of $250 that they might be able to write off, they took away from schoolteachers. The list goes on as far as tax breaks that are for taking care of people.

How are Democrats going to fight against the plan?

We’re going to notify and report daily what goes on in the committee. I hope the Republicans come to their senses. I can’t imagine that the Republican members from Pennsylvania and New York who went home didn’t hear from their constituents about how disastrous this is.

Is there a way for this bill to get through the House as it is, or do you think there are enough House Republicans who oppose it who can block it?

I don’t doubt that if they use the same tactic that they used in health care — remember they rolled it out, then pulled it back, then came up with something else…. It seems to me they are intent on a political win [rather] than a bipartisan compromise, legislation that people could all be a part of.

So, there’s a chance the bill can pass the House?

I think they are in for a rude awakening when this goes to the Senate.

But the GOP can have a win in the House?

They have all the apparatus. They have the presidency and the House and Senate. They have all the tools to get it through, but the question is, whether residents and citizens become alarmed enough, whether Republicans in the state of Connecticut reach out and say, ‘what are you doing to us?’

Even if they are able to jam this in the House, they are going to get the same result as they got on health care in the Senate.

And you say the bill’s adds to the deficit are deliberate?

When Brady was asked to acknowledge, well, jeez, you can’t make that up in this bill, he was forced to acknowledge ‘well that’s the second phase. We’re going after the entitlements, including Medicare and Social Security, and we are going to cut them to save them.