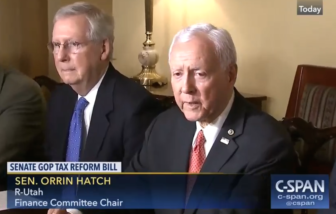 Washington – The Senate decided to go its own way in overhauling the nation’s tax code, and its plan would have a different impact on Connecticut taxpayers than a similar House bill.

The Senate bill would push back for a year President Donald Trump’s top priority of cutting the corporate tax rate from a maximum of 35 percent to 20 percent. Holding off implementation of the new rate would lower the cost of the bill by $100 billion, but it also would delay the GOP’s plans to entice businesses to move offshore operations back to the United States.

The biggest changes affecting individuals in Connecticut is the bill’s elimination of the deductibility of property taxes. The House plan would allow deducting these taxes up to $10,000.

Coupled with the elimination in both bills of deductions for state and local income taxes (called SALT, taxes), the end of the property tax deduction could impact many Connecticut taxpayers since the state has higher-than-average property taxes.

At a median of 1.63 percent of property value, Connecticut ranked 7th highest in the nation as far as property taxes in a survey conducted by Taxrates.org.

Unlike individuals, businesses could continue to deduct state, local and property taxes on their returns in both the House and Senate bills.

Like the House bill, the Senate bill would allow charitable and mortgage interest deductions. But since both bills would raise the standard deduction for individual filers from $6,350 to $12,000 and for married couples form $12,700 to $24,000, many who itemize now may find it more beneficial to take the standard deduction.

Unlike the House bill, the Senate bill would allow taxpayers to continue to make use of the medical deduction, which current taxpayers can claim if allowed medical expenses exceed 10 percent of income.

Rep. John Larson, D-1st District, a member of the House Ways and Means Committee that marked up the House tax bill this week, tried to reinstate the medical deduction in the House bill, but failed to win enough votes on that GOP-majority panel.

“Since the 1940s, medical expenses have been allowed to be deducted, and it is such a critical expense for so many of our seniors,” Larson said.

He estimated that in Connecticut, 116,390 people claimed this deduction, averaging $11,114 in qualified medical expenses.

The House plan reduced the number of tax brackets from seven to four.

The Senate plan would keep seven brackets, but lower the rates on some of them, especially on those earning $500,000 to $1 million.

The House bill would eliminate the estate tax entirely in 2024. The Senate bill keeps the estate tax, although it raises the threshold so that people won’t pay tax on the first $11 million of inheritance.

Some GOP senators said the increase in the child tax credit is not enough and will seek to make it larger.

“The Senate is not going to pass a bill that isn’t clearly pro-family,” said Sens. Marco Rubio, R-Fla., and Mike Lee, R-Utah, in a  joint statement, “so we look forward to working with our colleagues to get there.”

Certain small businesses in Connecticut may get a boost from the Senate bill.

It would allow small businesses that are organized as “pass through” companies, that is partnerships, sole corporations and S-corporations, to reduce their income by 17.4 percent. But certain “service businesses” such as consulting, engineering, law, medicine and financial services companies making more than $75,000 a year would be excluded from taking the deduction.

The House bill cleared the Ways and Means Committee Thursday on a party-line vote and will be considered on the House floor next week.

The Senate bill faces committee action and won’t be subject to a floor vote until December.

While Republican are selling the bill as a big boost to the middle class and to job creation by industry, the tax overhauls are universally panned by Democrats as a giveaway to the rich at the expense of middle-class Americans.

“If the House bill was bad for Connecticut families, the Senate plan is worse,” said Sen. Richard Blumenthal. “Completely eliminating the state and local tax deduction is a partisan ploy to punish states like Connecticut, devastating families who save thousands each year and communities that benefit from the support it provides for local services.”

Blumenthal also said “this huge tax hike on the middle class won’t be offset by any of the paltry tax credits Republicans claim may help working families, while saving the biggest benefits for the top 1 percent.”

Sen. Chris Murphy, said “the  latest bill is a disaster for Connecticut. “

“It will raise taxes on tens of thousands of middle-income families in order to provide a disgustingly giant tax cut for corporations and the super rich,” Murphy said.” I am all for tax reform that simplifies the tax code and actually lowers taxes for the right people, but this bill, written behind closed doors, does the opposite. I will oppose it with all my energy.”

The proposal replaces the individual income tax rate structure with a new rate structure, according to a description prepared by the Congressional joint Committee on Taxation.