CT senators say they will give Franken donations to charity

Washington – The U.S. Capitol was gripped this week by allegations of sexual wrongdoing against GOP Senate candidate Roy Moore and Minnesota Democratic Sen. Al Franken, leading many lawmakers, including Connecticut’s senators to distance themselves from those accused of misconduct.

Sens. Richard Blumenthal and Chris Murphy on Friday joined more than a dozen of their Democratic colleagues in saying they were donating all contributions from Franken’s political action committee, the Midwest Values PAC, to charity. Each senator has received $15,000 from that PAC. 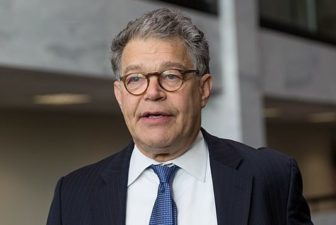 “Sexual harassment is never okay. There is no excuse for Senator Franken’s behavior, and I’m glad he has recognized that. I support a Senate Ethics investigation,” Murphy said.

Blumenthal said he is donating the money from Franken’s PAC to the Connecticut Alliance to End Sexual Violence.

On Friday, President Donald Trump waded into the controversy.

“The Al Frankenstien picture is really bad, speaks a thousand words. Where do his hands go in pictures 2, 3, 4, 5 & 6 while she sleeps?” Trump tweeted, adding later: “And to think that just last week he was lecturing anyone who would listen about sexual harassment and respect for women. Lesley Stahl tape?”

But Trump has not criticized Moore, even as a number of Republican senators this week, including Senate Majority Leader Mitch McConnell, said the former judge from Alabama should resign from the race for Attorney General Jeff Sessions’ former Senate seat.

“He weighed in; he said, if the allegations are true, he should step aside,” Huckabee said.

Sanders was also asked, “Is it still the White House position that all the women who have accused the President of sexual misconduct are lying?” 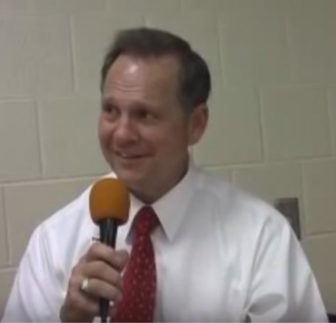 2011 Photo by BibleWizard via Creative Commons

“The president has spoken about this multiple times throughout the campaign and has denied all of those allegations,” she responded.

The allegations against Moore and Franken are different, and so are the way the accused are handling them.

Moore is facing mounting allegations of sexual misconduct against teen girls when the was a district attorney in his 30s.

Franken has been accused by Leeann Tweeden, a radio news anchor, of groping and “forcibly kissing” her without her consent during an overseas USO tour in 2006, two years before Franken was elected to the Senate.

In a photo that surfaced this week, Franken also appears be grabbing a sleeping  Tweeden’s breast  — and leering.

Franken has apologized to Tweeden, and said he would cooperate gladly with an ethics investigation and asked for one himself.

Moore has defiantly denied all wrongdoing and called the allegations, first revealed by the Washington Post, a “multi-faceted campaign” to smear him and “a desperate effort to sabotage my campaign and keep me out of Washington.”

On Friday, his wife Kayla Moore held a rally with seven other women to strike back at Moore’s accusers.

“He served our country in Viet Nam and he has always been an officer and a gentleman,” Kayla Moore said of her husband.