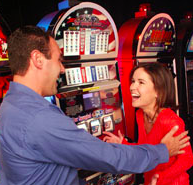 The unheralded arrival of 100 electronic bingo games at the Foxwoods Resort Casino is raising concerns at the State Capitol that the casino’s owner, the Mashantucket Pequot tribe, is testing the market for gambling machines that appear to fall outside the tribe’s longstanding revenue-sharing deal with the state of Connecticut.

To a gambler, the e-bingo machines look and function much like the 4,100 video slot machines at Foxwoods. But the tribe and the gaming industry, generally, view them as video extensions of the old-fashioned game of bingo — exempt from a 25-percent state levy on gross slots revenue that cost the Pequots $114 million in the 2017 fiscal year.

For now, the “Live Call Bingo” machines sit in silent rows at the request of the state Department of Consumer Protection, which regulates gaming and, for the time being, asserts they are subject to the revenue sharing agreement. The tribe disagrees, but its chairman, Rodney Butler, says the dispute will be resolved amicably.

“We’re working with the state on an incredible partnership, in fact expanding our wonderful partnership that goes back 25 years,” Butler said, a reference to an agreement struck with Gov. Lowell P. Weicker Jr. that has protected the state’s two tribal casinos from competition in return for a 25-percent share of gross slots revenue. “We would never put that in jeopardy.”

But the timing is awkward. The expansion of the partnership refers to legislation signed into law in June by Gov. Dannel P. Malloy. It allows the Pequots and the state’s other federally recognized tribe, the Mohegans, to jointly develop a new casino off I-91 in East Windsor to blunt the market loss to the MGM Resorts casino under construction in Springfield.

So, the question arises: Why is one of those partners testing machines that could circumvent the revenue-sharing deal?

Mohegan leader Kevin Brown gives a pen to a tribal member as the governor signs a ceremonial copy of a casino bill. At right, is the Mashantucket Pequot leader, Rodney Butler.

“I find that the timing of this is very odd,” said Rep. Joe Verrengia, D-West Hartford, the co-chair of the Public Safety and Security Committee, which has jurisdiction over gambling legislation. “It’s after the fact, after we just spent so much time debating the casino and the financial impact that a new casino would have on the state.”

And the two tribes still need help from the state before it can break ground in East Windsor. The tribes are seeking Connecticut’s support for final governmental approval of the East Windsor casino, this time from a reluctant Department of the Interior, which administers the Indian Gaming Regulatory Act.

The state’s authorization for the East Windsor casino is contingent on acceptance by the Department of Interior’s Bureau of Indian Affairs of revisions to the tribes’ gaming agreements with Connecticut, a hedge against a later finding that casino expansion has invalidated the exclusivity agreement and its revenue sharing.

But it has neither approved nor rejected the revisions, without fully explaining why.

Butler, whose tribe’s casino is deeply in debt, said there is no plan to use the bingo games on a large scale to undermine the revenue sharing.

Correspondence obtained by CT Mirror indicates that Department of Consumer Protection was unaware of Foxwoods’ plans to offer Live Call Bingo until shortly before the machines were scheduled to be installed and go live.

In a letter sent Sept. 28 to Foxwoods, Consumer Protection Commissioner Michelle Seagull wrote that she believed Live Call Bingo machines were to become operational on Oct. 1 and warned that the manufacturer, Video Gaming Technologies, needed to be licensed in Connecticut and its machines tested by an independent gaming laboratory.

Seagull asked that the tribe acknowledge the machines were subject to the 1993 slots deal.

In a reply sent on Nov. 2., the Mashantucket Pequot Tribal Nation Gaming Commission questioned the state’s jurisdiction over the games under the terms of its compact with the tribe or a more detailed memorandum of understanding. Bingo was a Class II game under Indian gaming regulations, exempt from state oversight and taxation, wrote the commission’s chairman, George Henningsen.

“While the Commission appreciates both your position and your concerns, we would respectfully suggest that there is overwhelming support for our position that the subject Devices are technologic aids to the play of bingo,” Henningsen wrote. “As such, they are Class II devices and are not governed by the Compact or the subsequent MOU.”

Seagull replied on Nov. 13 that the games status was unclear.

“The question of whether these devices are electronic facsimiles of a game of chance or an electronic aid to bingo for purposes of the Indian Gaming Regulatory Act is nuanced and technical in nature,” she wrote.

She asked for specifications and data about the design and function of the game. She closed with a pointed suggestions: “I request that you please continue to withhold turning the Live Call Bingo machines on until such time as this issue can be resolved.”

If the games are Class II machines exempt from the compact, there is a potential downside for the tribe: The state is free to allow the games to be installed outside the casinos without violating the exclusivity deal.

“The Department has been in communication with the Mashantucket Tribal Nation Gaming Commission requesting additional information regarding a ‘Live Call Bingo’ game. We have requested more information on this matter in order to ensure compliance with the law and the integrity of legal gaming in the state of Connecticut.”