Thinking of entering the A.G. sweepstakes? You better read this

Susan Bysiewicz leaving court with her lawyers in 2010. She eventually left the AG’s race, too.

A Democratic legislator and a former Republican lawmaker took steps toward a run for Connecticut attorney general Tuesday, one day after George Jepsen’s surprise announcement he would not seek a third term in 2018. Both contenders appeared to meet the unique residency and professional standards defined by the Supreme Court in 2010.

Rep. William Tong, D-Stamford, the co-chair of the Judiciary Committee, opened an exploratory committee, while Republican John T. Shaban, a former state representative from Redding who made an unsuccessful run for Congress last year, said he was creating a candidate committee.

Others were making calls, testing their political viability — and, if they were diligent, checking if they were qualified to run under the Supreme Court’s interpretation seven years ago of an 1897 law that created the office. The court’s ruling sets a de facto 10-year residency requirement for candidates and bars those with no litigation experience.

The law was the basis for the stunning disqualification of Susan Bysiewicz, a Duke University law school graduate who was a corporate lawyer before her election in 1998 to the first of three terms as secretary of the state. Jepsen was the beneficiary of the case, cruising to the Democratic nomination without competition, then winning the general election.

But Jepsen is among those who say the law is an anachronism that keeps qualified candidates from running, including lawyers confirmed by the legislature as judges of the Superior Court and justices of the state Supreme Court. It was passed a year before the election in 1898 of Charles Phelps of Vernon as the first attorney general, when the office had little or no staff.

Today, the attorney general oversees a staff of nearly 200 lawyers and rarely, if ever, appears in court. But the managing partner of a major law firm could not serve as attorney general unless they had courtroom experience. Neither could the dean of a law school, general counsel of a major corporation or leader of a public-interest law group.

“Ellen Peters wouldn’t have met it,” Daniel J. Krisch, one of the lawyers who represented Bysiewicz, said of Peters, a Yale law professor nominated to the state’s highest court after a career in legal academics. “The greatest chief justice of Connecticut couldn’t have been attorney general.”

Other states set simple and clear-cut qualifications: typically a minimum age (as low as 18 in many states), a requirement of citizenship or residency, and, in some cases, admission to the state’s bar. None, according to a review of qualifications by the Office of Legislative Research, specify courtroom experience.

Connecticut law requires an attorney general to have “at least ten years’ active practice at the bar of this state.” Bysiewicz had more than 10 years as attorney in 2010, but she was uncertain if it met the definition of “active practice.” She went to Superior Court, seeking a declaratory ruling.

Superior Court Judge Michael Sheldon, a well-regarded jurist now a member of the Appellate Court, ruled that she did. The Connecticut Republican Party appealed to the Supreme Court, which viewed “active practice” in the context of what they believed it meant in 1897 — “an attorney with at least some experience litigating cases in court.”

The court did not precisely define how much litigation experience was required to run, a finding that was unnecessary in Bysiewicz’ case “because it is undisputed that the plaintiff has no experience representing persons in court.”

By contrast, Rudy Giuliani, the former U.S. attorney in the Southern District of New York, or any other New York litigator who moved to Connecticut, would have to be a member of the Connecticut bar for a decade before running for attorney general here.

“It seems crazy. I think the answer is across the street from the Supreme Court,” Krisch said. “This would be a simple fix for the legislature, make the requirement to be a member of Connecticut bar in good standing. But the legislature hasn’t done anything since the Bysiewicz decision.”

Tong, the co-chair of the legislature’s Judiciary Committee, said lawmakers have discussed making such a change several times since the 2010 case, but litigation attorneys argued that courtroom experience still was important, even if the attorney general no longer had to appear in court.

“There were strong feelings on both sides of the issue,” Tong said.

Tong, who benefits from the status quo, said the law is ripe for another review, but changing the law in time to affect the 2018 field was unlikely. It inevitably would turn, in part, on who would benefit from putting the Connecticut law in line with other states.

“You can’t make the change in the middle of a campaign,” Tong said in an interview. “You don’t want to politicize it.”

Tong filed paperwork Tuesday creating an exploratory committee that allows him to raise money for any statewide office. Sen. Tim Larson, D-East Hartford, signed on as his treasurer.

In their announcements, Tong and Shaban appealed to core Democratic and Republican constituencies. 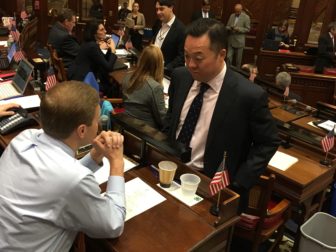 House Majority Leader Matt Ritter, D-Hartford consults with Rep. William Tong, D-Stamford. during a debate. Tong is exploring a run for AG. Ritter has decided against it.

As co-chair of Judiciary, Tong said, “I personally stood up to the NRA by fighting to pass laws to stop gun trafficking and protect victims of domestic abuse from gun violence; stood up to an unjust system of mass incarceration by fighting to pass the Second Chance Society law, the Excessive Use of Force law, and the law reforming a broken bail system; and stood up for civil rights and basic liberties by fighting for marriage equality, transgender rights, and the rights of immigrants unfairly targeted by federal authorities. And in the midst of the mortgage crisis, I stood up to Wall Street by fighting to overhaul our state’s foreclosure laws and to help thousands of people stay in their homes.”

Shaban said he would create a candidate committee, which limits him to raising money just for attorney general.

“Connecticut’s economy continues to underperform, starving our citizens of the promise and prosperity they deserve,” Shaban said. “The Attorney General can help by easing barriers to success for businesses and individuals. My time in the legislature, coupled with my decades of experience practicing commercial law, will enable me to help a new administration correct our course. Governor Malloy and his team have created economic uncertainly and stagnation. Connecticut needs a fair and stable legal environment for employers and employees to thrive.”

Jerry Labriola, the former Republican state chairman, was described by other Republicans as interested in running. He said he was not ruling it out, but was more inclined to work to help elect a Republican candidate for governor.

Tong was the only politician to file papers related to a campaign for attorney general Tuesday with the State Elections Enforcement Commission.