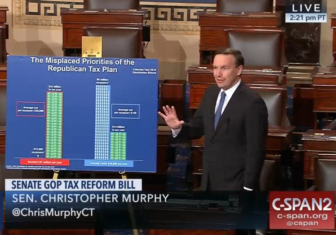 Sen. Chris Murphy speaks against the tax bill on the Senate floor.

Washington – The Senate early Saturday passed a sweeping overhaul of the federal tax code that would end the deductibility of state income taxes and eliminate other popular tax breaks while lowering tax rates for individuals and corporations.

With Vice President Mike Pence presiding over the Senate, the bill was approved on a 51-49 largely party line vote. Sen. Bob Corker of Tennessee, who had concern about the bill’s impact on the deficit, was the only Republican holdout.

The bill’s approval is not the end of the GOP effort to overhaul the tax code. The Senate package must be reconciled with a tax package the House approved earlier this month.

Republican leaders had to tweak the Senate bill in different ways on Friday to win the support of a handful of wavering GOP senators, and the resulting legislation was released to the public, and Democratic senators, late Friday. One change, which had been pushed by Sen. Susan Collins, R-Maine, would allow deductibility of up to $10,000 in property taxes paid.

Sen. Chris Murphy, D-Conn., criticized the process, saying Democrats “were kept out of the loop,” and accused the GOP of “burying the bill in the dead of the night.”

Murphy and Sen. Richard Blumenthal, D-Conn., joined other Democrats in calling the bill a giveaway to the wealthy.

“The idea that you finance a tax cut for the rich…and that it will trickle down, that is not true. You might as well believe that unicorns are real,” Murphy said.

Blumenthal said, “This measure is rotten to the core.”

“It will increase the divisions in our society…and increase economic insecurity,” he said.

Democrats said that, while some middle-class families may receive a modest tax break under the bill, that relief would be short-lived because the lower tax rates for individuals are temporary, ending in 2026, while the corporate tax rate cuts are permanent.

Murphy and other Democrats also said many middle-class families and individuals who live in high-tax, high-cost states like Connecticut would see immediate tax increases under the bill because they would no longer be able to deduct state and local income taxes. Connecticut does not have a local income tax.

“It’s been crafted in a way that hurts states like mine that depend on the state and local tax deductions,” Murphy said.

Blumenthal said the loss of the deduction “will hit Connecticut harder than most other states.”

Republicans countered that the states that pay high state and local taxes and are allowed to deduct those from their federal tax liability — mostly “blue” states with Democratic majorities like New York, California and Maryland as well as Connecticut—are receiving an unfair benefit. 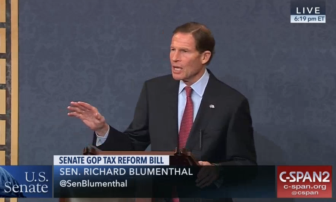 “It’s a subsidy that is being paid by people in low-tax jurisdictions,” said Sen. Pat Toomey, R-Pa.

The bill also ends the deductibility of casualty losses, except for those connected to a presidential declaration of a national emergency.

That would put an end to a new tax break for homeowners in the state who have crumbling foundations because of the use of tainted concrete. The Senate bill, and a House bill approved earlier this month, ends that tax break on Dec. 31.

“Homeowners with foundations that are crumbling will lose the ability to deduct the expense of fixing their homes,” Blumenthal said.

The bill keeps the mortgage interest deduction, the charitable deduction and the medical deduction. But with the loss of other deductions, and the near doubling of the standard deduction to $12,000 for individuals and $24,000 for families, fewer Americans are expected to itemize.

Like the House bill, the Senate bill ends the personal exemption, worth $4,050 for every member of a family this year. But it increases the child tax credit.

The Senate plan would keep seven brackets, but lower the rates on some of them, especially on those earning $500,000 to $1 million.

Unlike the House bill, the Senate bill keeps the estate tax, although it raises the threshold so that people won’t pay tax on the first $11 million of inheritance.

This week, the Joint Committee on Taxation, found that only 44 percent of taxpayers would see their tax burden reduced by more than $500 and high earners would benefit far more than the poor under the Senate bill.

The Senate bill would lower the top corporate tax rate from 35 to 20 percent.

Certain small businesses in Connecticut also may get a boost.

The tax overhaul would allow small businesses that are organized as “pass-through” companies, that is partnerships, sole corporations and S-corporations, to reduce their income by 23 percent. But certain “service businesses” such as consulting, engineering, law, medicine and financial services companies making more than $75,000 a year would be excluded from taking the deduction.

To win the support of Sen. Jeff Flake, R-Ariz., the GOP leaders agreed to work on providing “fair and permanent protections” for the beneficiaries of a program that protects young undocumented immigrants from deportation, called Deferred Action for Childhood Arrivals, known as DACA.

The Trump administration ended those protections, which have shielded about 10,000 Connecticut youth from deportation.

To pay for reinstatement of the property tax deduction, GOP leaders reinstated the alternative minimum tax, a levy the wealthy pay so they do not avoid paying all taxes because of their tax breaks. But the threshold for paying the AMT tax was raised.

The bill also eliminated the tax penalty on individuals who don’t have health insurance. Republicans say the “individual mandate” hurt low-income people and is a violation of personal rights.

Democrats say this will increase the cost of health insurance for others, as young healthy people will be more motivated to drop their insurance. The Congressional Budget Office says it will result in 13 million more uninsured.

“By repealing the individual mandate, premiums will go up by 10 percent a year,” Murphy said.

About $1.5 trillion of the cost of the tax bill is not paid for and would add to the deficit. Republicans say a boost in economic activity spurred by the bill will result in more tax revenues for the Treasury and make up the loss.

But the Joint Committee on Taxation estimates that activity will fall about $1 trillion short.

Blumenthal said he spoke to military experts at a hearing this week who said the tax bill will make it harder to spend money on defense priorities.

“Many of us asked them whether they thought it would be possible to make that investment at the same time our nation is about to go an additional $1.5 trillion in debt as a result of this misguided, malign scam, this tax bill,” Blumenthal said. “They shook their heads no.”