Students on campus at Tunxis Community College in Farmington.

A controversial plan to consolidate Connecticut’s 12 community colleges into a single accredited institution would shed nearly 190 people in top administrative positions by 2021.

The plan would cut out each institution’s president, budget staff and other administrative positions and form an integrated staff for all the community colleges. It would not close any of the campuses or cut any faculty or student support functions, such as advisor and counselor positions.

The Board of Regents for Higher Education, which oversees the Connecticut State Colleges and Universities (CSCU) system, will consider the plan Wednesday. The system, which includes the community colleges and the four regional state universities, is under pressure to save money because of declining enrollment and reductions in state funding.

CSCU President Mark Ojakian says the plan would save the community college system about $28 million annually by the time it’s fully implemented.

“This is one way in which we are going to not only save money, provide better services to our students, increase revenue that comes into our system, and at the same time prioritize where we’re going to spend our resources,” Ojakian said.

Ojakian will ask the Board of Regents to endorse implementing the consolidation and gaining approval from the schools’ accrediting institution, the New England Association of Schools and Colleges. 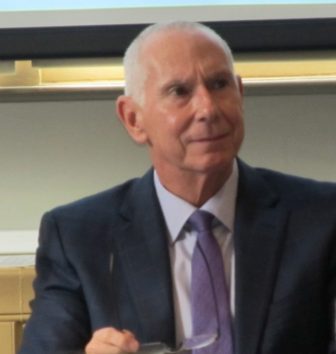 Board of Regents President Mark Ojakian

Attempting to balance the budget through tuition and fee increases instead would require annual hikes over a five-year period that would more than double tuition by 2022, said Erika Steiner, the chief financial officer of CSCU system.

Even with the consolidation, the schools will remain $13.2 million in deficit next fiscal year as the plan rolls out, a 3 percent shortfall. The next two fiscal years are projected to be in the black if the full savings from the consolidation are realized.

The plan makes some risky assumptions, though, including that enrollment will buck the downward trend of the last several years and remain flat. The state also is facing multi-billion dollar deficits through the 2021 fiscal year, and higher education has regularly been targeted for cuts to close state budget deficits.

Even if state aid and enrollment do remain flat, the savings from consolidation is not enough to put the system on solid fiscal footing for long. Projections show the system will be back in the red in four fiscal years.

Ojakian and his staff also proposed a second plan aimed at saving an additional $13 million by reorganizing how financial aid, enrollment management and other services are delivered. The regents are not scheduled to consider that plan on Wednesday.

If the plan is approved, the CSCU system would expect to begin rolling it out in July 2019, but layoffs could not take place until 2021 because of the recently approved agreement between the state  and its employees.

Ojakian called the plan the most responsible step to take at this point.

“We don’t know what’s going to happen with state support, and we also don’t know what we are going to have to do in terms of tuition over time,” Ojakian said. “But my hope by implementing this consolidated approach is not only to be able to have a community college system that’s sustainable in the long-term but that focuses its spending on student services and on students first.”

Correction: A previous version of the photo caption with this story wrongly identified the campus in the picture as Three Rivers Community College in Norwich.