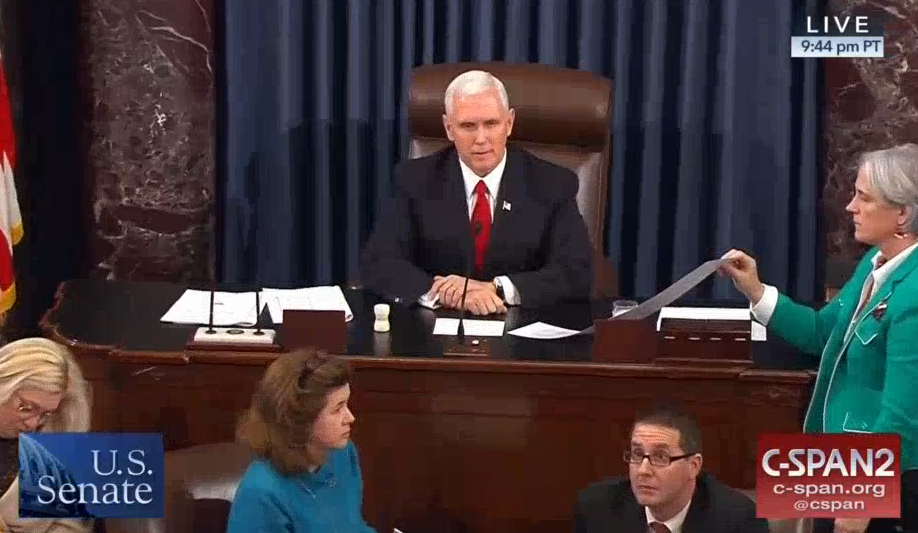 Vice President Mike Pence announces passage of the tax bill in the Senate.

The Senate’s 51-48 vote on the tax plan followed the U.S. House’s approval on Tuesday. But the tax bill was not sent to the White House for President Trump’s signature.

Instead it was returned to the House for a second vote in that chamber on Wednesday because the legislation was changed in the Senate after the chamber’s parliamentarian ruled that three of its provisions violated Senate rules.

The Senate’s roll call had to be suspended several times as protesters in the visitor’s gallery erupted in shouts of “kill the bill” and provoked other disruptions.

Democrats called the massive tax overhaul a “scam” intent on making the wealthy, including Trump and GOP donors, richer.  Not a single Democrat voted for the plan in either the House or Senate.

“It’s a tax scam with moral consequences in terms of inequality in this nation,” said Sen. Richard Blumenthal. “It tilts benefits in favor of the wealthiest and corporations who receive permanent tax cuts. It will hurt working families, students, public schools, firefighters, police officers, local governments, and sick people who receive nothing but crumbs by comparison.”

Sen. Chris Murphy called the tax package “essentially a ransom payment to big GOP donors who have demanded this all year long.”

Republican supporters of the new tax plan, which lowers the top corporate rate to 21 percent permanently and temporarily reduces rates on individual filers, said the plan would boost economic activity and leave more money in the pockets of working Americans. The legislation, which will affect every American business and household, is the largest change to the federal tax code since 1986.

“A lot has changes in this country in the past 30 years,” said Sen. John Thune, R.-S.D. “The one thing that hasn’t changed in this country is the tax code…Since President Reagan signed the last overhaul into law, our tax code has ballooned into an unwieldy, complex maze that costs American taxpayers an incredible amount of time and money and acts as a drag on economic growth and job creation.”

Himes said the tax bill would raise the cost of living in Connecticut and lower the values of homes in the state as popular deductions that made home ownership more attractive are curtailed.

Himes also predicted Congress would have to make changes to the bill in the future, because GOP predictions that economic activity will make up for the tax plan’s $1.5 trillion in unpaid cost will never originate true.

“There’s no doubt that in the next five or ten years we will have to repeal parts of the bill,” Himes said.

In a speech on the House floor before the vote Rep. John Larson, D-1st District, chided GOP supporters of the bill for approving legislation that may force future cuts in domestic spending. 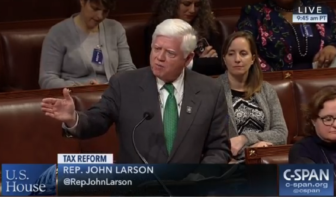 “It’s hard to be here today as we approach Christmas and look at this bill…and know that we have honorable members on the other side who this Christmas will be sitting with their relatives, their family members, their mothers and fathers, their brothers and sisters, and know that this creates not just the $2 trillion debt but the pay-for, the pay-for out of the Medicare program, an automatic cut of $25 billion that was never debated,” Larson said

The Congressional Budget Office says the tax bill could trigger automatic cuts worth $136 billion from mandatory spending in 2018, including $25 billion in Medicare cuts, if Congress doesn’t find another way to offset its deficit increases.

Larson also said “at the end of the day, this bill was about giving my Republican colleagues a political win after a series of failed attempts at repealing and replacing Obamacare.”

“The president wanted to get a win at any cost,” she said. “Senate Majority Leader Mitch McConnell is trying to reward donors to the Republican Party. And (House Speaker) Paul Ryan has always wanted to do entitlement reform and this is a backdoor way to do that.”

Only a dozen GOP House lawmakers voted against the plan. Most of them came from California, New York and New Jersey, states like Connecticut that have high taxes and high-priced real estate and whose residents could be hurt by the capping of mortgage and state and property tax deductions.

Esty also said the tax plan puts these “blue” states in a “headlock.”

“There is going to be huge pressure on Connecticut to cut taxes,” she said, hurting the education system and other services in the state.

Rep. Joe Courtney, D-2nd District, said, “This bill will exacerbate our national deficit and sets up the rationale that Republicans will use to launch their long-anticipated attacks against Social Security and Medicare, which Speaker Paul Ryan has already brazenly promised to do.”

While it eliminates or shrinks many popular deductions, the tax bill nearly doubles the standard deduction to $12,000 for individuals and $24,000 for married couples.

The tax bill also creates a new 20 percent deduction for “pass through” businesses, a provision that has been criticized because it would help wealthy real estate investors like Trump.

The tax bill preserves the estate tax, but exempts the first $11 million of an estate from taxation. It also raises the threshold for those required to pay the alternative minimum tax, a levy on the wealthy whose deductions would otherwise erase all or most of their tax liability.

In addition, the tax bill in 2019 ends the Affordable Care Act’s “individual mandate,” which imposes a tax penalty on those who don’t have health insurance.