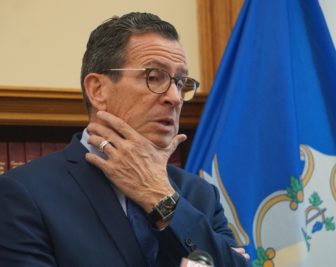 Malloy challenged the General Assembly to tackle the teachers’ fund in the regular 2018 session, which begins Feb. 7.

“Connecticut simply cannot afford annual payments of $4 to $6 billion into this fund,” the governor said Tuesday, citing projections identified in the 2014 report from the nationally recognized Center for Retirement Research at Boston College. “We must make smart reforms now to fix the system, and we can do it without curtailing benefits for teachers. If we don’t act, there will be no way to meet these obligations without hollowing out major state programs such as Medicaid and municipal aid. It’s that simple.”

But taking action to avert the spike may not be simple, for legal reasons as well as financial ones.

Connecticut’s history of not saving for the retirement benefits it promised public-sector workers — a problem which dates back to 1939 —  has gotten increasing attention since Malloy took office in 2011. That problem created the majority of the roughly $74 billion in unfunded liabilities beleaguering state finances.

The retirement center at Boston College warned that required contributions to the two pensions — which were between $1 billion and $1.6 billion last fiscal year — each could sail beyond $6 billion per year by the early 2030s.

To counter that, Malloy, unions and the legislature agreed last year to restructure payments into state employees’ pension, shifting billions of dollars of expenses into the future.

The governor said it’s time to craft another shift, or watch teacher pension costs strip funds from other priorities in the state budget.

Malloy had proposed this past year that legislators empower the state’s Teachers’ Retirement Board — working with his budget office — to craft a payment realignment plan.

Legislators directed the teachers’ board and others to study the issue, but stopped short of authorizing them to make the changes themselves, directing them instead to report back to lawmakers in 2018.

Any realignment of pension contributions is controversial on multiple grounds.

For one reason, by contributing less than originally projected into the state employee pension fund over the next 15 years, Connecticut’s treasurer would have fewer pension resources to invest over that period. The state must make up for those deferred contributions after 2032.

This “lost investment opportunity,” as it’s referred to by some accountants and actuaries, effectively is the interest charge imposed on the state for taking longer to pay its pension obligations.

The new payment plan for the state employees’ pension aims to cap annual costs at about $2.3 billion per year, but also shifts an estimated $14 billion to $21 billion in costs onto future taxpayers after 2032.

When it comes to the teachers’ pension, there also is a second hurdle.

The state’s bond counsel has questioned whether any realignment would be legal — at least until Connecticut finishes paying off $2 billion it borrowed to bolster the teachers’ pension fund back in 2008.

The Hartford firm of Day Pitney wrote in 2016 that it believes the deferral of payments into the teachers’ pension would violate guarantees Connecticut built into the covenant with bond investors in 2008. And that guarantee was good for the 25-year life of the bonds.

The Malloy administration has questioned this legal opinion and whether it effectively binds the state from realigning pension contributions.