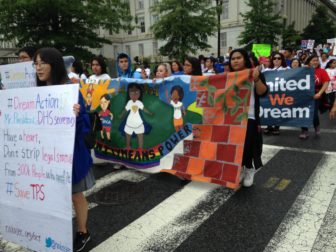 Immigrant youths and their supporters march in Washington last summer.

Washington – A deal that ended the brief government shutdown included a promise to hasten a debate in Congress over immigration, but good intentions have run into political realities that are putting the fate of thousands of young, undocumented immigrants in Connecticut in doubt.

Sergio Ramirez, 23, is one of them. He moved from Mexico to New Haven when he was 9 years old to reunite with this mother. He said the logjam in Congress over the fate of young immigrants has left him disappointed and anxious.

“It’s not easy and it’s very discouraging if it doesn’t move forward,” Ramirez said of legislation that would protect him from deportation.

But his future, and the fate of up to 700,000 young people known as “dreamers,” who were brought to the United States without legal status as infants and young children, is more uncertain that ever.

“It’s sort of … pushing us back into the shadows,” Ramirez said.

President Donald Trump in September ended an Obama-era program that helped Ramirez and about 8,000 other dreamers in Connecticut.

Trump said it was up to Congress to pass legislation that would do what former President Obama did through executive authority – protect young immigrants who met certain conditions from deportation and provide them with work permits.

But Congress has floundered for more than 10 years in its attempts to pass legislation, and Trump is now making that approval more difficult by insisting it be accompanied by money to build a wall along the U.S.-Mexico border and broad changes to the nation’s immigration policy.

Negotiations took another step back when Senate Minority Leader Charles Schumer, D-N.Y., said his offer to support $1.6 billion to help build the border wall “is off the table.”

White House press secretary Sarah Sanders said Trump will unveil an “immigration framework” on Monday that will help the dreamers.

But the proposal also will curb legal migration through petitions for family members and include other provisions that could make it hard to pass the Senate, where Democrats are likely to filibuster the proposal

If there’s no congressional action by March 5, the roughly 700,000 recipients under the Deferred Action for Childhood Arrivals, or DACA, program will begin to face the risk of deportation as their two-year permits begin to expire.

Others who turned 16 and became eligible for DACA after the president ended the program are vulnerable to deportation now, as are those who did not renew their permits in time.

On Wednesday, Mark E. Ojakian, president of Connecticut State Colleges & Universities, wrote to members of Congress urging them to act.

“At the Connecticut State Colleges & Universities, we have hundreds of DACA and undocumented students who are striving to earn their degree and achieve a piece of the American dream,” Ojakian wrote. Many of these students work to help support their families and are active members in their local communities, while juggling the responsibilities necessary to excel in their studies. They do all of this while living with the constant fear that their families could be deported at any moment. They are watching DACA’s March 5thexpiration date fast approaching, with still no action from Congress.”

Ojakian said “this is not a Democrat or Republican issue. This is about supporting young Americans who are doing everything we ask our young people to do. They simply want to continue to live safely in the only country they have called home.”

A number of factions in Congress have unveiled proposals to help dreamers, ranging from a bipartisan plan sponsored by Sens. Lindsay Graham, R-S.C., and Dick Durbin, D-Ill., to a GOP proposal that appeals to conservative hardliners.

To complicate things, Republicans say they are not going to be bound by any proposal that emerges from the Senate, and the president wants DACA protections tied to comprehensive immigration measures.

“As the clock gets closer and closer to the (March 5) deadline, the more scared kids are,” he said.

Troyb, and other lawyers that have helped eligible youth file for DACA status, are finding it difficult to advise their clients. “One day it looks like a deal is imminent, the next day the sides are very entrenched and far apart from each other,” Troyb said.

The government shut down because Senate Democrats blocked passage, at least for a while, of a short-term bill, known as a continuing resolution, that would keep the government running until a budget for the rest of the federal fiscal year could be hammered out.

Democrats said one reason they opposed the CR is they were unhappy with the GOP’s failure to address the fate of the dreamers.

Once Senate Majority Leader Mitch McConnell promised to allow debate on the issue, Democrats voted to end the shutdown. But not all of them.

Esty said she voted against it because the government should not be run on one short-term stop-gap spending bill after another. “If you reward bad behavior, you get more bad behavior,” she said.

Esty said a bipartisan bill that would help the dreamers can pass the Senate, but that only partisan GOP legislation the Senate would reject would pass the U.S. House.

“In the Senate you actually have negotiations going on,” Esty said. “The real problem is in the House of Representatives, where there is no compromising with Democrats.

Esty and other Democrats are pressing for House GOP leaders to allow votes on a number of immigration proposals in order to determine which one would prevail.

Despite the deal that reopened the government, Esty sees little progress on help for the dreamers, or a long-term federal budget, before the CR expires on Feb. 8 and there’s another shutdown crisis.

“I don’t see how the dynamics have changed at all,” she said.

Carolina Bortoletto, a dreamer from Brazil who co-founded CT Students for a Dream, cites polls that show a vast majority of Americans are sympathetic to the plight of the dreamers.

“The two parties need to listen to the people and protect dreamers,” she said.

Ramirez is just looking for stability.

“We have allegiance and we love this country, but what we don’t want is to be American for two months or two years. We want permanent stay so that we can stay forever,” he said.