Trump pushes for ‘bump stock’ ban, but Malloy, others skeptical 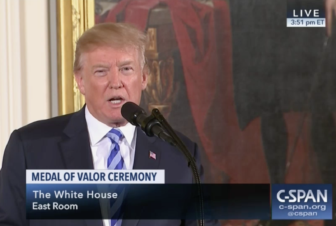 President Trump at a Medal of Valor ceremonty at the White House where he said he would order the Justice Department to propose a rule banning bump stocks.

At a Medal of Valor ceremony at the White House on Tuesday, Trump, said he expected the “critical” new regulations to be finalized soon.

“Unfortunately, this has all the hallmarks of a classic bait-and-switch,” Malloy said.

A congressional ban on bump stocks was proposed after it was used by the shooter in Las Vegas in November to kill 58 people. The device allowed him to engage his weapon’s trigger faster, making it fire at a rate similar to that of an automatic weapon.

But that effort died after the White House, and congressional Republicans said they preferred the Bureau of Alcohol, Tobacco and Firearms and the Justice Department determine what authority it had to outlaw bump stocks.

In December, the Justice Department announced that it had begun a federal rule-making process that could reinterpret the legality of certain bump fire stock devices.

In a memo to Session, Trump said, “Today, I am directing the Department of Justice to dedicate all available resources to complete the review of the comments received, and, as expeditiously as possible, to propose for notice and comment a rule banning all devices that turn legal weapons into machineguns.”

The initiative was met with skepticism by proponents of a bump-stock ban and tighter federal regulation of guns.

“They signaled support for banning bump stocks after the Las Vegas shooting and there has been no action,” Murray said.

She also said a bump stock ban “would not be enough to prevent future tragedies.”

“I’m glad President Trump finally understands that bump stocks should be illegal. Now he needs to follow through with action and support our bill to ban these deadly devices,” she said.

Feinstein said, “The ATF currently lacks authority under the law to ban bump stocks” and has made this clear to Congress.

“If ATF tries to ban these devices after admitting repeatedly that it lacks the authority to do so, that process could be tied up in court for years, and that would mean bump stocks would continue to be sold. Legislation is the only answer,” Feinstein said.

Malloy, who is seeking a state bump stock ban, agreed with Feinstein.

“We need more than just regulations – we need to make this the law,” Malloy said. “In Connecticut, we are going to pass a law banning bump stocks and we firmly believe that the federal government should do the same. “

Malloy urged Trump “to take a look at our bill and implement similar legislation nationwide.”

Trump has been grappling for days with how to respond to the massacre in Parkland, Fla.

He has signaled his support for legislation sponsored by Sen., Chris Murphy, D-Conn., and John Cornyn, R-Texas that would encourage states to provide more information to the National Instant Criminal Background Check System, or NICS, that is used to screen prospective gun purchasers. 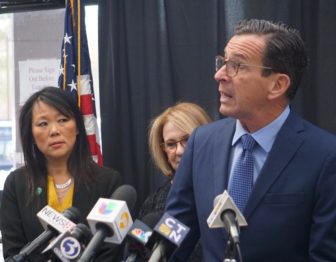 “The president has expressed his support for efforts to improve the federal background check system, and, in the coming days, we will continue to explore ways to ensure the safety and security of our schools,” said White House Press Secretary Sarah Sanders.

Murphy said Trump’s actions are welcomed, but won’t on their own stop increasingly frequent mass shootings.

“We  should ban bump stocks and we should pass our Fix NICS Act, but that’s not enough,” Murphy said. “ Our constituents are begging us to get serious about gun violence, and these small measures are wholly insufficient.”

Trump has planned a “listening session” at the White House Wednesday and has invited members of the Parkland community as will individuals who were impacted by past school shootings, including the Columbine and Sandy Hook tragedies.