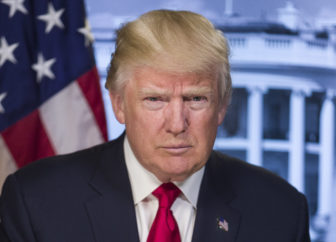 Washington – Grappling to respond to the massacre at a high school in Parkland, Fla., President Donald Trump is considering support of a bill introduced by Sen. Chris Murphy and Texas Republican Sen. John Cornyn that would tighten FBI background checks of prospective gun purchasers.

“The president spoke to Senator Cornyn on Friday about the bipartisan bill he and Sen. Murphy introduced to improve federal compliance with criminal background check legislation,” White House press secretary Sarah Sanders said in a statement on Monday. “While discussions are ongoing and revisions are being considered, the president is supportive of efforts to improve the Federal background check system.”

After a shooter killed at least 26 people in a Baptist church in a rural Texas town in November, Murphy and Cornyn crafted a bill that would increase the frequency with which state and federal agencies must report offenses to the National Instant Criminal Background Check System, or NICS, that would legally prohibit individuals from purchasing a firearm.

Murphy responded to the news out of the White House by tweeting “Interesting morning. Two quick thoughts: 1/ Trump’s support for the FixNICS Act, my bill with @JohnCornyn, is another sign the politics of gun violence are shifting rapidly. 2/ No one should pretend this bill alone is an adequate response to this epidemic.”

Besides Cornyn, the Senate majority whip, the legislation has other key GOP sponsors, Sens. Tim Scott of South Carolina, Orrin Hatch of Utah and Dean Heller of Nevada, and other Democratic backers as well, including Sens. Richard Blumenthal, Dianne Feinstein of California and Jeanne Shaheen of New Hampshire.

Unlike other legislation that has failed in the Senate, the bill would not expand the federal background check system beyond purchases made at gun shops, and allow sales by individuals on the Internet and at gun shows to be exempt from the system.

Instead, the “Fix NICS Act of 2017,” which has been endorsed by the National Rifle Association, would reinforce the requirement that federal agencies report all infractions to the National Instant Criminal Background Check System, or NICS, and creates a financial incentive for states to do so as well.

Connecticut is one of 13 states that use their own screening system, then reports the information they obtain to NICS.

Congress has no authority to compel states to report all information NICS collects. The Murphy-Cornyn bill would offer new financial incentives, as well as favorable access to other federal assistance programs, to states that report infractions to the system.

The bill has a “stick” as well as “carrots.” It would withhold bonuses and overtime pay from political appointees who head agencies that aren’t fully compliant in their reporting of information to NICS.

In December, the U.S. House approved a “Fix NICS” bill,” but as a package that included the “Concealed Carry Reciprocity Act,  which would  allow those with permits in one state to carry their firearm into another state.

The concealed carry provision would not get the 60 voted needed to pass the legislation in the Senate, sinking the joint bill.