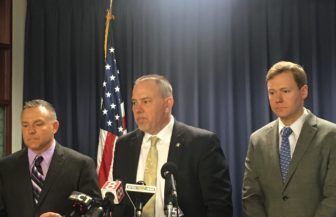 House Democratic leaders are preparing to enact legislation this spring to launch Connecticut’s own legal sports betting industry. Their plan, though, is conditional upon an anticipated U.S. Supreme Court decision, which would have to green-light such activity.

But House Democratic leaders said it is important that Connecticut be ready to regulate and tax an industry that already exists — legally in a handful of other states and underground across Connecticut and the rest of the nation.

“If the court opens up this extremely popular market to the states,” Connecticut should be ready to go from both a regulatory and an operational standpoint,” Speaker Joe Aresimowicz, D-Berlin, said during a late morning press conference in the Legislative Office Building.

And while the speaker and other leaders said they hope to have the matter resolved before the regular 2018 General Assembly session ends on May 9, the X-factor is the nation’s highest court and a key sports betting case.

Leaders here, though, said they expect the Supreme Court to open the door for states nationwide to offer sports betting.

In the case of Christie v. the National Collegiate Athletic Association, the state of New Jersey is contesting a national law restricting sports betting. At issue is the federal government’s authority to regulate commerce among the states set against rights reserved for states by the 10th Amendment to the U.S. Constitution.

Currently, sports betting is illegal in most states, outside of activity grandfathered in Nevada and some narrow exceptions in a few other states.

“Connecticut should be ready to act as soon as the Supreme Court decision is handed down,” said House Majority Leader Matt Ritter, D-Hartford. “Based on the oral arguments before the court late last year, it seems entirely possible that the federal ban on sports betting will be overturned, and we want to be competitive with other states.”

Aresimowicz said leaders haven’t developed all of the details, but they envision a system that might provide several legalized gambling options.

For example, sports betting could be offered in public venues. It currently is available online, chiefly through companies based in Nevada. If legalized in Connecticut, the goal would be to require that all Connecticut patrons seeking to gamble legally online work only with a site run by a state-licensed operator.

Very preliminary fiscal estimates are that the state could gain $40 million to $80 million annually by imposing fees on sports betting, Aresimowicz said.

Connecticut began preparing for that potential revenue stream late last October when the legislature enacted a new state budget. Within that document is a provision that authorizes fantasy sports contests — provided they do not interfere with the longstanding gaming agreement between the state and the southeastern Connecticut casinos run by the Mashantucket Pequot and Mohegan tribal nations.

Since the early 1990s, the state has received 25 percent of the annual video slot proceeds from those operations. In return, the state has not permitted new forms of casino gaming in Connecticut, unless it involves a facility run by the tribes.

The legislature agreed last year to allow the tribes to open a satellite casino in East Windsor to help them compete with a new MGM Grand casino under development in Springfield.

Aresimowicz said Wednesday that talks between the state and the tribes still would have to preceed any development of a sports betting industry here.

Mashantucket Pequot spokeswoman Lori Potter said the tribe, which runs Foxwoods Resort Casino, is looking forward to continuing conversations with Aresimowicz and other lawmakers on sports betting and other gaming opportunities that might arise this session.

“It’s our position that sports betting does fall under our exclusivity agreement, because the state of Nevada sports betting is conducted at casinos,” Potter said.

The new budget also directed the Department of Consumer Protection to develop regulations to manage sports betting by July 1, 2018.

Lastly, it established a 10.5 percent tax on any licensed, sports-betting operator in Connecticut, starting July 1, 2019. But all of this is contingent on the U.S. Supreme Court action.

Ritter added that while this provided an initial blueprint, lawmakers still would have many details to work out — and should be able to do so before May 9.

Marlene Warner, acting executive director of the Connecticut Council on Problem Gambling, said the state legislature would have to ensure it is taking care of players through resources for people with gambling problems.

“So when we consider looking at offering new types of gambling or legalizing a type of gambling that has been underground for a long time, we want to make sure there are the right pieces in place, and that’s through legislation and regulation,” Warner said.

The legislature’s Public Safety Committee, which has jurisdiction over gaming matters, will conduct a forum at 11 a.m. Thursday, in the Legislative Office Building on present and future gaming trends.

“I think it’s important that Connecticut is poised to compete in the marketplace should sports betting become legalized,” Verrengia said.

Connecticut lawmakers also have discussed in recent years whether to legalize and tax recreational marijuana use, and Aresimowicz acknowledged that if the General Assembly finds time to debate gambling, marijuana legalization forces may demand equal time.

“We’re planning to have that debate this year,” the speaker said.