Esty: I gave abusive staffer good reference to ‘get him out of Washington’ 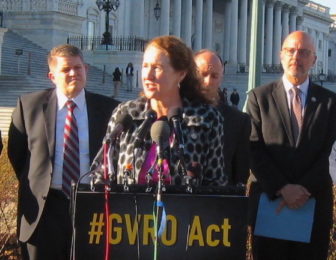 Washington – Rep. Elizabeth Esty said Tuesday she wrote a glowing reference letter for former chief of staff Tony Baker with the understanding he would leave Washington, D.C., providing “space” and protection to  another former aide, Anna Kain, who has accused Baker of physical and verbal abuse.

“My instinct was once I learned about  (the abuse) was how to protect her,” Esty, D-5th District, said.

Esty’s letter of recommendation, praised Baker’s “keen political judgment” and said he is “effective in managing relationships with a wide range of constituencies and interest groups.” She said it was written with the understanding Baker would never use it for another supervisory role.

Esty also said she was sure that Baker, with 10 years of Capitol Hill experience, would easily be able to find another job in Washington without her recommendation.

Esty announced last week she will not seek re-election after being harshly criticized for waiting three months to fire Baker after learning he had mistreated Kain and intimidated and threatened others on her staff.

“It was a mistake,” Esty said on Tuesday. “I should have suspended Tony right away and gotten outside human resources help to do an investigation. I was not a trained manager.”

After leaving Esty’s office, Baker was hired by Sandy Hook Promise in his home state of Ohio.

Esty said Sandy Hook Promise co-founder Mark Barden phoned her seeking a reference for Baker a couple of months after the lawmaker fired her former chief-of-staff in August of 2016.

Barden said Esty gave him no indication she had had a problem with Baker. Baker has recently left Sandy Hook Promise.

“I should not have helped him because there was too much risk in that,” Esty said.

On her first day back on the job after announcing she would not seek re-election, Esty on Tuesday held a number of media interviews in the U.S. Capitol.

“People have a lot of questions, and I think it’s important to answer them,” she said.

Esty said she spent the last week with her family “trying to process what happened” and was surprised and hurt when members of her own party demanded she immediately resign from Congress.

The lawmaker, who has represented the 5th congressional district since 2013, said she will not resign before the end of her term.

If Esty were to resign, the soonest a replacement could take her place would be in August, when Congress breaks for its summer recess. That’s because both a special primary and a special general election would have to be held to determine who would serve out the rest of her term, which ends at the end of the year.

She said she won’t quit because it’s important for residents in the 5th District to continue to have a vote in Congress and for them to be able to seek help from congressional offices that are fully staffed. When a lawmaker resigns, his or her congressional offices remain open, but often without a full staff or anyone to provide direction.

“There is a lot of work to be done,” said Esty, who had a binder marked “Tuesday” that contained her schedule for the day.

She said she made a “horrible mistake,” in handling Baker’s case, but was motivated by her wish to protect Kain, who is the same age as her daughter. Esty said Kain had left her office the year before she learned of Baker’s behavior.

When told by another former chief-of -staff, Julie Sweet, about staff complaints about Baker, Esty said she called Kain to confirm that Baker had left abusive messages, including one threatening to kill her, after an after-work Cinco de Mayo party.

She said she was so focused on her congressional duties, she did not realize what was happening in her own office.

“I didn’t see anything; I didn’t hear anything. I was completely blindsided,” Esty said. “I thought I had created an atmosphere where people could come to me.”

Esty’s decision to not seek re-election has fueled plenty of interest from both Democrats and Republicans in running for what will be an open seat.

Those include  Mark Greenberg, a Republican who is currenley running for state comptroller and former  state Rep. Dan Carter, who unsuccessfully ran against Sen. Richard Blumenthal in 2016, and Rep. William Petit of Plainville. State Sen. Kevin Witkos of Canton also is weighing the race.

On the Democratic side, Mary Glassman, the former first selectman of Simsbury, has jumped into the race. State Rep. Michelle Cook, D-Torrington, and Sandy Hook’s Barden are considering it.

Esty had some advice for her successor.

“I hope I can be a cautionary tale,” she said. “I hope they don’t think they have to be absolutely perfect.”