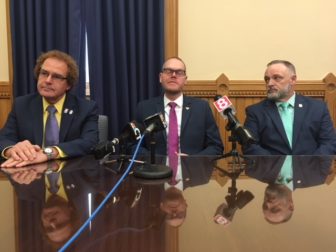 House Democratic leaders tried Wednesday to jump-start stalled efforts to address the crumbling concrete foundation crisis in eastern Connecticut, joining two rank-and-file Republicans at an unusual press conference with potential implications for the last weeks of the 2018 session and the campaign for control of the General Assembly.

House Speaker Joe Aresimowicz of Berlin and House Majority Leader Matt Ritter of Hartford pledged to support a $10 surcharge on insurance policies that would provide a second source of funding for a limited relief program adopted last fall, committing to a measure viewed dubiously by House Minority Leader Themis Klarides, R-Derby, and much of the GOP caucus.

“This thing is dying. It needed a boost,” Ritter said after the press conference, where the two Republicans, Reps. Tom Delnicki of South Windsor and Kurt Vail of Stafford, advocated a surcharge opposed by their leader and many other legislators. “We need something to change the narrative.”

The bipartisan budget passed last fall included $100 million in borrowing over five years to provide relief to owners of homes with concrete foundations containing aggregate from a Willington quarry contaminated with pyrrhotite, a naturally occurring mineral that corrodes and causes massive cracking when exposed to groundwater.

“But we know that this is potentially going to be a generational issue, and upwards of $4 billion to $5 billion, given the potential scope of the issues,” said Rep. Jeff Currey, a Democrat from East Hartford, one of about 40 communities afflicted by the problem. “So, we need to find some way to have a sustainable funding stream past that initial five years.”

The state is creating a captive insurance company to assess and pay claims by homeowners who are confronted with six-figure estimates to replace their foundations. So far, the insurance industry has declined to view the damage as covered by standard property and casualty policies, which generally cover losses from fire and storms, not defective construction.

A similar issue in Canada eventually was the subject of a national bailout. Officials from FEMA and the U.S. Army Corps of Engineers have inspected the damage, but have declined to declare it eligible for federal disaster relief. State officials estimate 30,000 homes could be affected, roiling the real-estate markets in eastern Connecticut.

“I think the speaker and I felt it was very important to say, everybody here to say, ‘We’ll put our credibility out there. And we’ll put our names out there’ and say, ‘We’ll vote for it. We’ll support it.’ We hope that moves it through the House. We hope it gives momentum in the Senate,” Ritter said. “But we wanted to sit here today with three weeks to go and let those voters in eastern Connecticut know we got your back.”

And that is a likely talking point in campaigns for seats in eastern Connecticut, a region that leaders of both parties say has a relatively large number of competitive legislative districts. The state’s Senate is currently split, 18 to 18, while Republicans could win control of the 151-member House this fall if they can make a net gain of just five seats.

Delnicki and Vail, who have numerous constituents affected by crumbling foundations, attended the press conference with the knowledge of Klarides.

“I applaud the speaker and the majority leader for their actions here,” Delinicki said. “This is a Connecticut issue, because of the far-reaching implications that it has on the real estate market, the banking market, the insurance industry and the desirability of Connecticut in and of itself. This is truly a state issue.”

Aresimowicz promised to call a vote on the surcharge — a concept that could not win passage in any committee — before the session ends May 9. He said the proposal would be offered as an amendment to another bill.

“My concerns are still the same in regards to any surcharge for any reason, for raising money for any issue in the state,” Klarides said. “I have members that certainly live in those areas that have serious problems and concerns with it. Some of them support it, but some of them don’t.”