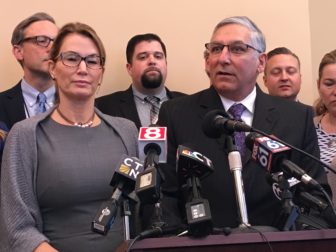 In a major move toward a bipartisan budget compromise, Republican legislators recommended more funding for social services, higher education, transportation and municipalities — and agreed to help pay for them by tapping about $300 million of this spring’s income tax windfall.

But Republican leaders also conceded they would not close a deficit in the current fiscal year before it ends on June 30. GOP and Democratic leaders first pledged to address the shortfall when Gov. Dannel P. Malloy identified it more than five months ago.

“We have to be responsible about how we budget if we want our state to grow, thrive and prosper,” Senate Republican leader Len Fasano of North Haven said during a mid-day Capitol press conference. “This budget is about stabilization.”

Moving toward middle ground on spending

The Republican plan increases municipal aid by $70.5 million above current levels while fully reversing a more than $90 million cut to the Medicare Savings Program, which helps poor seniors and disabled patients pay for medications. The latter move would avert reductions in benefits projected to affect more than 110,000 patients.

The state’s cap on municipal property taxes on motor vehicles, slated to rise next fiscal year from 39 mills to 45 mills, would remain at 39.

The GOP also addressed several elements of an earlier budget proposal that drew criticism from their Democratic colleagues.

The plan to save $62 million by cutting state employee benefits in mid-2027 — after the current benefits contract expires — was scrapped. Democratic legislative leaders, union officials and the governor all have said they believe this is illegal, while GOP lawmakers insist it would survive a court challenge.

Republicans pumped an extra $54 million for public colleges and universities into this budget proposal compared with their original one.

And the plan includes an extra $9.1 million next fiscal year to help keep the Special Transportation Fund solvent. That brings the GOP closer to the $20 million extra proposed by House Democrats.

Republicans also took a step toward middle ground in the way they paid for many of these changes. The GOP effectively tapped a $1.3 billion surge in state income tax receipts tied chiefly to capital gains and other investment income.

Here’s how they did it:

That unanticipated $1.3 billion, combined with the $212 million currently in the budget reserve, would leave more than $1.5 billion in the state’s rainy day fund after this fiscal year.

Some of that money will be needed to close the $387 million deficit projected for this fiscal year.

But what if that deficit were larger?

The Republican budget “carries forward” $299 million in resources earmarked for payments to hospitals. The industry, which originally expected to get the money this spring, won’t get paid unless federal Medicaid officials approve a new state-hospital taxing arrangement — and approval is not expected until late summer or in the fall.

By carrying those resources forward, the GOP budget gives the state an extra $299 million to spend in the next budget while simultaneously enlarging the outgoing fiscal year’s deficit by the same amount.

The new deficit for the current year, under the Republican plan, would be $686 million, which would be closed entirely with the budget reserve dollars — which is filled primarily with this spring’s income tax receipts.

Republicans also maintained a proposal to use another portion of the income tax windfall to bolster the state’s pension funds. About $209 million would be transferred into the state employees pension and $193 million would go into the teachers’ retirement fund.

Fasano and other Republicans had cautioned against finding a way to tap these receipts to bolster the next budget.

A new “volatility cap” enacted by lawmakers last October was designed to force Connecticut to save these dollars rather than to spend them.

And when Democrats proposed a 2018-19 spending plan last month that exceeded projected revenues at the time by $375 million, the GOP charged Democrats must intend to either tap this spring income tax windfall, or raise taxes.

So are Republicans basically doing something they warned against?

“The answer is mea culpa,” Fasano told The Mirror in an interview, adding that he’s confident both parties can reach a bipartisan budget deal before the regular 2018 legislative session ends on May 9.

House Speaker Joe Aresimowicz, D-Berlin, who chastised Republicans on Tuesday, saying they were resisting a bipartisan compromise, thanked Fasano and Klarides on Wednesday.

“While frustrated by the process, I appreciate the effort” to move toward compromise, said the speaker, who has argued a portion of the income tax windfall should be spent on crucial programs. “I think we’re a lot closer to a deal than has otherwise been portrayed.”

Aresimowicz added that he’s hopeful one remaining stumbling block between the GOP and some Democrats — emergency state aid for Hartford — also can be resolved.

Republicans have said the debt assistance agreement Malloy and state Treasurer Denise Nappier signed with the city exceeded the level of aid authorized by the legislature in last October’s budget.

The GOP also has said traditional grants to Hartford should be reduced in future years — after 2019 — to match the debt assistance aid pledged in the agreement.

“Given all of the compromises that took place last year in the budget negotiations,” he said, “I am confident if we all sit at the table, we can come up with a compromise that works.”

Republican leaders frustrated Malloy, though, when they conceded they would not close the hole in the current plan — a problem they had nearly half a year to address.

Malloy first reported on Nov. 20 a $200 million shortfall in the legislators’ budget — a plan they negotiated without his administration.

The governor delivered a plan to mitigate that deficit in mid-December, earlier than required by law, and top lawmakers from both parties insisted they would start dealing with the matter in January.

Nothing happened for months.

Fasano said Republicans had a plan to mitigate about $190 million of the shortfall. But when it rose in April beyond $360 million, they didn’t want to decimate key social services, municipal aid and health care programs.

The administration wasn’t buying Fasano’s statement Wednesday that it was “impossible” to close this year’s deficit.

Malloy spokeswoman Kelly Donnelly said solutions could have been found had lawmakers acted in a timely manner.

“Amazingly, they did all this while also claiming — literally — the current year deficit was ‘impossible’ to fix,” Donnelly added. “Again, the party of so-called fiscal responsibility said this after being in session since February with an existing current year deficit that they’ve known about, and for which the governor gave them hundreds of millions of dollars in options to solve. And yet, they’ve simply given up. Republicans have tried nothing and they’re all out of ideas.”

Fasano responded that, “The truth is Governor Malloy has always wanted to see the legislature’s bipartisan budget fail and has done everything in his power to try to make that happen, ignoring savings recommendations made by the legislature and failing to implement the budget as lawmakers intended.”