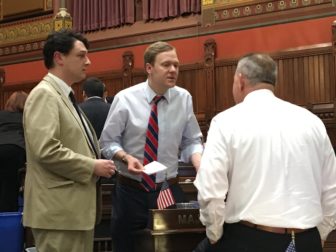 Connecticut’s legislative leaders struggled into the early morning Wednesday in negotiations to resolve what may be the state’s strangest budget fight: It’s not about money.

In a state with a $20 billion budget, the Democratic and Republican spending proposals on the table in the early hours of Wednesday differed by just $19 million. That’s a rounding error — less than one-tenth of 1 percent.

Sources said leaders from both parties reached a tentative framework on a bipartisan deal shortly after 1:30 a.m. that closed the remaining gap.

But most of the disagreements discussed Tuesday, sources added, involved what are intended to be election-year talking points separating the parties as they struggle for clear control over what is now a closely divided General Assembly.

Republicans, whose gubernatorial candidates have promised to control spending by curbing collective bargaining by public employees, propose to make several changes to state employee retirement benefits after the current contract expires in mid-2027, including:

These proposals not only echo recommendations made earlier this year by the state Commission on Fiscal Stability and Economic Growth, but also past Republican budget proposals from this year and 2017.

Her party needs a net gain of five seats to win a 76-75 majority.

“We want to put the future of the state of Connecticut in front of politics,” Senate Republican leader Len Fasano of North Haven said, adding he was cautiously hopeful a bipartisan deal could be struck before Wednesday’s constitutional adjournment deadline. The Senate now is evenly divided, 18-18.

Both GOP leaders said they remained committed to talking with their Democratic counterparts.

And House Speaker Joe Aresimowicz, D-Berlin, said Democrats are communicating with the GOP and with Gov. Dannel P. Malloy, a Democrat whose administration was largely snubbed last fall as lawmakers agreed on a bipartisan budget. Malloy is not seeking re-election.

“There’s no way with 25 1/2 hours to go that major structural changes in how government operates are going to go forward,” Aresimowicz said late Tuesday night.

The key, he said, is to find compromise. But that also means running proposals past a House Democratic caucus that includes some wary of these and other collective bargaining changes. 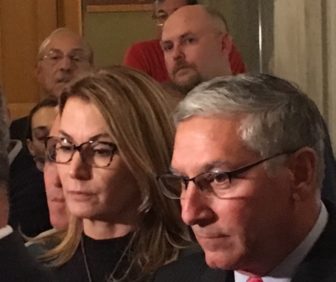 The Republican budget incorporated proposals from the fiscal stability panel and from the Connecticut Conference of Municipalities regarding collective bargaining.

It would shield a portion of a city or town’s emergency reserve from being considered in the binding arbitration process when calculating a municipality’s ability to cover employee raises, and it would prohibit communities from entering into contracts that restrict their ability to employ volunteer services.

“It’s the same tired story,” said Lori J. Pelletier, the AFL-CIO president, who says these types of proposals vilify public-sector workers for problems they did not create. “Why can’t we work together?”

Between 1939 and 1984 the state saved little in advance of state employee retirements to cover pension benefits, forfeiting huge investment earnings, according to a 2014 report by the Center for Retirement Research at Boston College.

That only changed after employee unions took the state to court and the two sides negotiated a new way to save for pensions.

“When that didn’t happen, nobody paid attention to” properly saving for pensions, Pelletier said.

But the fiscal stability panel noted that Connecticut now is a national outlier and few states negotiate retirement benefits.

Though this was a major sticking point to a bipartisan budget deal, sources close to the talks said there were a few other issues.

A Republican proposal to freeze hiring and reduce departmental salary accounts by more than $80 million had some Democrats wary agencies would lack the staff to carry out vital programs.

The GOP moved to take another problem off the table earlier in the day Tuesday when it agreed to support a proposal from progressive Democrats to restore $12 million to the federal Medicaid-funded health insurance program for poor adults, Husky A.

Advocates say this funding would enable approximately 13,500 adults from households earning between 155 and 138 percent of the federal poverty level to retain state-sponsored coverage.

The two sides also had agreed, sources said, to:

The administration had been tasked with achieving unprecedented savings targets this fiscal year and Malloy — who has met those directives — has said on several occasions that he had no other option but to include town aid on a broad list of programs that had to be reduced.

“I don’t know what they want,” the governor said late Tuesday. “There seems to be a movement to spend more money, not less.”

Both parties’ budget proposals would spend about $206 million more than is authorized in the preliminary 2018-19 budget lawmakers enacted last spring. Both plans also would tap roughly $300 million of this spring’s unanticipated, $1.3 billion state income tax windfall.

The legislature was supposed to save those funds, which were identified through a new “volatility cap” system.

The rationale for this new system is that the capital gains portion of the income tax represents one of the most volatile revenue streams in the state budget. Since the income tax was enacted in 1991, this component frequently varies from year to year by double-digit percentages. In other words, Connecticut cannot assume that if revenues in this area surge dramatically this spring they will do so again one year from now.